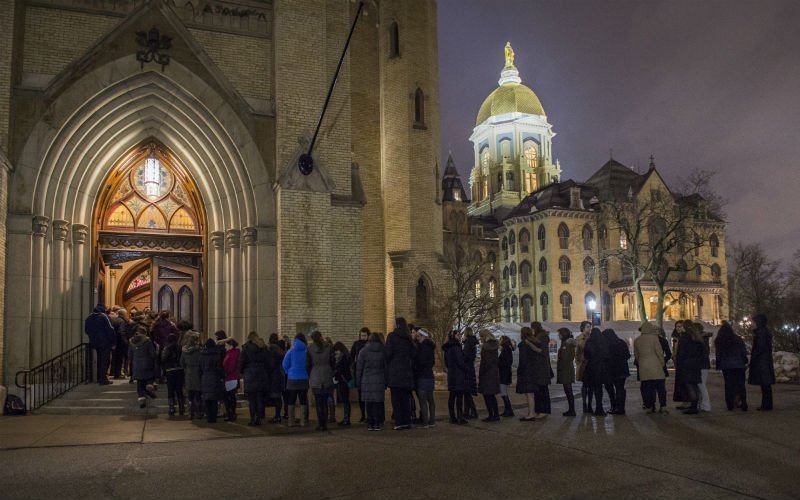 Students wait in line outside the Basilica of the Sacred Heart on the campus of the University of Notre Dame in 2015.

NOTRE DAME, Ind. — Questions and confusion continue to swirl around the University of Notre Dame’s decision to allow the third-party administrators of its health plans to go on providing morally objectionable services to university employees, even though Notre Dame no longer is required by the government to do so.

On Oct. 6, the Trump administration issued an interim rule expanding the religious exemption from the U.S. Health and Human Services 2012 mandate, which requires most employers to include contraceptives, abortifacients and sterilizations in its employee health plans.

That expanded exemption now allows religious institutions, like Notre Dame, to exclude these items from employee health plans. The new rule is in effect while the government solicits public comments.

On Oct. 7, Holy Cross Father John I. Jenkins, the university’s president, applauded the new rule, and an Oct. 27 email was sent to faculty saying those services would not be covered after Dec. 31.

However, another e-mail to faculty Nov. 7 reversed course and informed employees that the university’s third-party administrator, Meritain Health, and prescription benefit manager, OptumRx, would continue to provide those items free of charge.

That same night, in his annual address to faculty, Father Jenkins said that the “university’s interest has never been in preventing access to those who make conscientious decisions to use contraceptives. Our interest, rather, has been to avoid being compelled by the federal government to be the agent in their provision.”

He went on to say that since these items will continue to be provided “directly” through the third-party administrators, “this will allow employees who choose to do so to acquire contraceptives directly through these insurance providers, without the university’s direct involvement.”

This position appears to duplicate the so-called “accommodation” offered by the Obama administration to religious employers who objected to the original HHS mandate. That “accommodation” provided for religious nonprofits to file written notice of their objection with the HHS, which in turn would tell insurers to provide the services at government expense, with no cost to the employee and no involvement of the employer.

The Little Sisters were granted a temporary injunction, but Notre Dame was not, and the university wound up including those services in its employee health plan to avoid huge fines while its lawsuits against the HHS mandate were being litigated.

He said at that time Notre Dame and the insurer were under a legal obligation and threat of fines for noncompliance, but now neither Notre Dame nor the insurer are under any legal duty to provide the coverage.

“Now Notre Dame has freely consented to its contractor’s offer to distribute contraceptives and abortifacients free-of-charge to those on Notre Dame’s employee health plans,” Bradley said, adding: “That makes Notre Dame morally responsible for doing exactly what they have said for years is gravely immoral.”

A Catholic News Service request for an interview with Notre Dame officials to examine the rationale behind this decision was answered only by a prepared statement to the press from Paul J. Browne, vice president of the Office of Public Affairs and Communications:

“After the U.S. Health and Human Services announcement in October, we believed that insurance companies would discontinue no cost coverage for contraceptives at the end of the year. Since then, we learned that they would continue such coverage. We have made the decision not to interfere with the provision of contraceptives administered by insurance administrators and funded independently.”

This attempt to shift the sole responsibility to the insurer raises many questions, especially since the new exemption rule specifically gives the decision to the employer, not the insurer. The rule also states that “the ‘accommodation’ process” can remain ‘in place as an optional process for certain exempt entities that wish to use it voluntarily.”

So, people in the Notre Dame community are asking if Notre Dame even claimed this religious “exemption” it now qualifies for? Or, is the university voluntarily leaving in place the “accommodation” it had previously rejected on moral grounds?

People also are asking how drugs and sterilizations can be provided by the insurance company “at no cost.”

A source in the insurance industry told CNS: “No insurance company provides free drugs.” Drugs advertised as “free” usually are cheap generics that are covered by the employee’s deductible, she said, but the deductible would not cover sterilizations or more expensive drugs like the “morning-after pill.”

Bishop Kevin C. Rhoades of Fort Wayne-South Bend told CNS that he disagrees with the Notre Dame decision and that he continues to “dialogue with Father Jenkins on this matter in the context of fidelity to Notre Dame’s Catholic mission.”

In addition to the moral issues, the Notre Dame decision to ignore the hard-fought-for expanded religious exemption may also have troubling implications for future religious liberty cases.