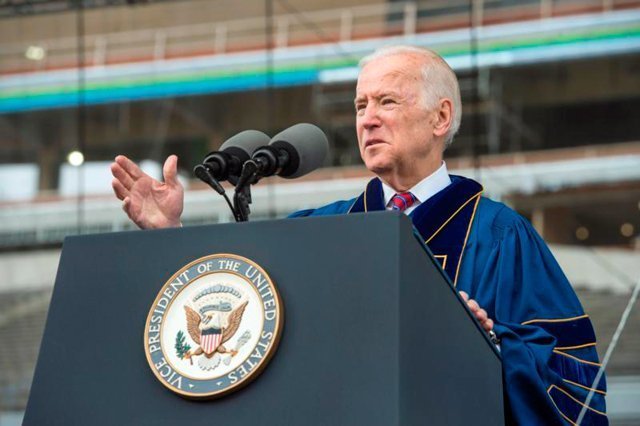 U.S. Vice President Joe Biden delivers an address after receiving the Laetare Medal during the 2016 commencement ceremony May 15 at Notre Dame Stadium in Indiana.

NOTRE DAME, Ind. (CNS) — The University of Notre Dame conferred it prestigious Laetare Medal on Vice President Joe Biden and former House Speaker John Boehner without incident at graduation May 15, but the controversy over the recipients still hung in the air.

From the moment the university announced the 2016 medal recipients March 5, criticism swirled over the decision because the medal is supposed to honor Catholics for "outstanding service to the church and society."

Yet, the Notre Dame president, Holy Cross Father John I. Jenkins, has defended the choice, saying that the two men are not being honored for policy positions but for their public service and dedication to civility in public discourse.

Father Jenkins struck that chord again when he addressed the two medal winners at graduation before the conferral of the award, noting that each man had legislative achievements for which everyone should be grateful.

"Each of you, we must acknowledge, have cast votes and taken positions about which many among us have reservations — in some cases grave moral reservations," the priest said. "We cannot and do not turn a blind eye to such reservations. We award you today the Laetare Medal not to endorse particular positions you’ve taken or votes you’ve cast, but because each of you have given your lives to serve the common good in political leadership by your own best lights."

A similar note was struck in the Laetare Medal citation that was read by Richard C. Notebaert, chairman of Notre Dame’s board of trustees.

The citation said that the university was conferring its "highest honor, the Laetare Medal," on the two men "neither to advance your favorite causes nor to advance your respective policies, but to celebrate two lives and careers inspired by the Catholic call to service and admirably dedicated to the alignment of our democratic institutions with the contours of the common good through honest engagement with contentious issues, vigorous debate and responsible compromise."

Before the awardees were publicly announced in early March, Bishop Kevin C. Rhoades of Fort Wayne-South Bend had advised Father Jenkins against giving Biden the award. He explained this advice in a March 16 statement in which he wrote: "I believe it is wrong for Notre Dame to honor any ‘pro-choice’ public official with the Laetare Medal, even if he/she has other positive accomplishments in public service," and to do so would cause scandal.

"We should not honor those who claim to personally accept church teaching, but act contrary to that teaching in their political choices," Bishop Rhoades wrote, explaining that "trying to separate or distinguish the conferral of the Laetare Medal upon the recipients from their positions on public policies" is not "realistically possible or intellectually coherent."

Cardinal Donald W. Wuerl of Washington celebrated Notre Dame’s baccalaureate Mass but did not attend graduation. When asked about Cardinal Wuerl’s opinion of the Laetare Medal choices, an archdiocesan spokesperson said that the archdiocese does not comment on matters in other dioceses, and referred to Bishop Rhoades’ March 16 statement.

In their remarks after the conferral of the Laetare Medal, neither Biden nor Boehner referred to the controversy, but spoke instead of the necessity to find common ground.

Boehner credited Pope Francis and former Notre Dame football coaches Gerry Faust — who coached Boehner in high school — and Lou Holtz with helping him decide who he was going to be and what he would do with his life.

Biden cited Pope Francis’ remarks to the U.S. Congress last September, when the pope told the lawmakers that their responsibility was pursuit of the common good. Calling the Notre Dame graduates "the most educated and the most tolerant generation" in the history of this country, he urged them to "engage in the tireless pursuit of finding common ground, because not only will you be happier, you will be incredibly more successful."

Citing the personal losses in his own life, Biden urged the graduates to choose family over career and to bounce back from setbacks they will experience.

A small group of protesters from area pro-life groups gathered peacefully on the public sidewalks at the main university entrance. Wearing his academic garb, Notre Dame professor emeritus Daniel Costello joined them and held a sign that read "Abortion: The Ultimate Child Abuse."

Costello told Catholic News Service that Biden has been opposed to almost everything the church tries to do in the areas of life, marriage and family, and to honor a person with that record sends the wrong message and is a source of scandal.

"I think it was a bad decision," Costello said, "and I’d like to see us get back to honoring people who are faithful to the church and faithful to church teaching, particularly on important matters like life and marriage."

Costello said that feelings on campus on the matter were mixed, and he praised the 800-member student pro-life group that offered an alternative to a sidewalk protest by providing graduates and their relatives "precious feet" life pins symbolizing the unborn to wear to commencement.

A statement from the Notre Dame Right to Life group explained: "We believe that this form of protesting is one of love and will still be respectful of the graduates and their families as they are rejoicing in their graduation from Our Lady’s university."