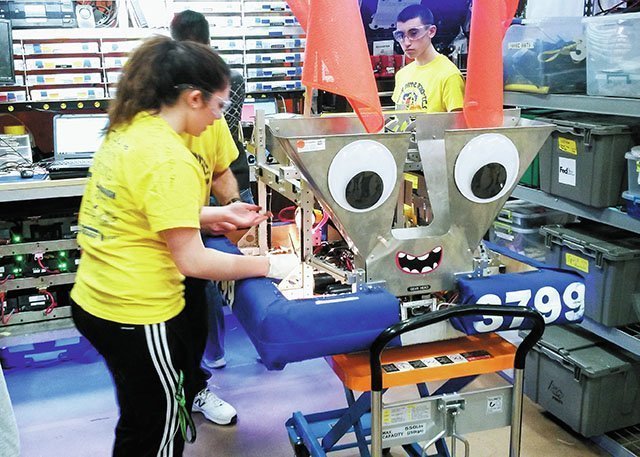 And, after coming out on top in a major competition involving that robot, ND’s 19-member crew was all smiles as well.

Notre Dame claimed first place at the Finger Lakes Regional FIRST (For Inspiration and Recognition of Science and Technology) event, held March 16-18 at Rochester Institute of Technology. The victory qualified Notre Dame for the FIRST world competition, which was set for April 26-29 in St. Louis, Mo.

ND’s team, known as Electric Fire No. 3799, competed among 49 schools at the regional event at RIT. Robert Stanley, the team’s adviser, explained that the competition’s premise was getting a steam-powered airship to fly by programming a robot to round up and deposit gears on a peg. The more gears collected by team members to add to the airship, the more points they received. Additional points were awarded by programming the robot to climb a rope.

Electric Fire amassed enough points in its opening rounds to reach the playoffs, which involved 24 squads. From that point on, a total of eight three-team “alliances” engaged in single-elimination competition to determine the overall winner. Notre Dame joined with two Rochester-area squads — Team 191 X Cats and Team 3015 Ranger Robotics — to win quarterfinal, semifinal and final matches and claim the prestigious crown as champions of the Finger Lakes region.

ND team members had prepared for regionals by spending eight weeks learning engineering concepts and another six weeks building its robot, utilizing the facilities at Carbaugh Tools in Horseheads.

“There’s a whole bunch that goes into it. It’s not just one thing — it’s electrical, programming, mechanical. There’s a lot that goes into it,” noted Adrian Haluska, a Notre Dame sophomore, who served as a driver and mechanic for the robot.

“That right there represents our team. We’re there to have fun; we go to have a good time,” Stanley said of the face.

“They’ve all worked really hard. The amount of hours they’ve put in is astounding,” Stanley said, noting that over a six-week period the team met every day to build the robot, seven days per week — two hours on weekdays and eight each on Saturdays and Sundays.

“I also do track, and there were days when I had to go to school, then straight to robotics from track,” said Paco Rilloraza, a Notre Dame senior who served as a lead programmer for Electric Fire.

Along with the roles played by Adrian and Paco, team members have contributed in other ways, such as designing the robot’s appearance, scouting other teams’ matches at the regional meet and taking part in strategizing. Their participation, Stanley observed, enhances their problem-solving, teamwork and communication abilities. He added that considerable college scholarship money is available through involvement in robotics, not to mention the chance to hone vital intellectual skills for future careers. For instance, Paco said his plans for college include “definitely an engineering field, and being in robotics plays a gigantic role in helping me decide that.”

Of all these benefits available for Electric Fire participants, none rank higher currently than the thrill of their landmark victory at regionals. This marked the seventh year of robotics competition at Notre Dame, and the first time the school has captured a regional title.

“I was so amazed — ‘did this really just happen?’ There was a lot of screaming, a lot of hugging,” Adrian said of his team’s reaction upon clinching first place.

“I don’t think any of the kids are going to forget that moment any time soon,” Stanley remarked.

EDITOR’S NOTE: Proceeds from Electric Fire’s ongoing fundraising efforts are used to cover the team’s travel expenses for competitions. Contributions may be made anytime by visiting https://www.gofundme.com/NDHSRobotics2017 or calling the school at 607-734-2267.