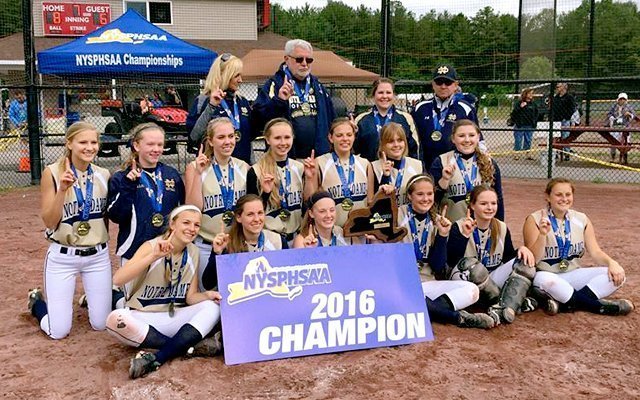 Stellar pitching and defense carried Elmira Notre Dame for much of the 2016 post-season, yet it was the Crusaders’ offense that made the difference in their state-championship girls’ softball game.

Notre Dame won the state Class C title with an 8-6 victory over Caledonia-Mumford in the final played June 12. This marks the program’s second state crown, with the other coming in 2011. ND finished as state runner-up a year ago.

Among other Catholic high schools in the diocese, another newly crowned state champion is McQuaid Jesuit’s Tobi Tella in boys’ track and field. He won two different titles in the triple jump event at the state meet June 10-11, and also helped lead a dominant McQuaid team to the Section 5 Class AA title May 27-28.

In its state final against Caledonia-Mumford of Section 5, Notre Dame found itself down 3-0 before exploding for seven runs in the third inning, with Jordyn Fargo connecting for a three-run homer and Mackenzie Maloney adding a three-run double. As it turned out, all seven of those runs were needed as Cal-Mum rallied against a normally stingy Crusader squad that had allowed a total of just four runs in its previous four games.

ND had reached the title game with a 12-2 rout over Ticonderoga of Section 7 in semifinal play June 11, as Izzy Milazzo threw a one-hitter and drove in six runs on offense while Alivia Clark drove in three. That was preceded by a 4-0 win over Cooperstown of Section 3 in state quarterfinal action June 3 as Milazzo tossed a five-hitter.

Notre Dame’s narrowest encounter of the post-season came in its Section 4 Class C title game. The Crusaders, seeded third, earned a 2-1 win over No. 4 Tioga in the final played May 28. ND overcame a 1-0 deficit by scoring both its runs in the fifth inning, with Milazzo throwing a four-hitter. That victory marked the 400th win of Coach Steve Weber’s career.

Earlier in sectionals, the Crusaders won 15-5 over No. 6 Candor in quarterfinal play May 24 behind four runs batted in from Clark, then scored a 4-0 semifinal win over No. 2 Thomas A. Edison May 26 behind Milazzo’s four-hitter and Clark’s two-run homer.

Notre Dame concluded its state-championship season with a record of 21-4.

Tella had a superb showing at the state meet. He earned the state Division I championship in the triple jump June 10, recording a leap of 50 feet, 10 3/4 inches, which was nearly two feet longer than the second-place jump. One day later, Tella went 49 feet, 11 inches in claiming the state Federation title.

One week prior to states, Tella placed first in the triple jump at the Section 5 Meet of Champions state qualifier June 3. He also topped the field in that event at the Section 5 championships May 28.

The Knights were dominant at the sectional meet, winning Class AA with 145 points, while second-place Webster Thomas had 111. Other sectional event winners for McQuaid were Noah Williams, in the 100- and 200-meter dashes; Donny Glavin, 1,600 and 3,200 runs; Atiba McLaren, 400 hurdles; Nick Caterisano, 3,000 steeplechase; the 400 relay; and Alex McNulty, pentathlon.

Although the Little Irish entered sectionals with just a 9-8 record, they came away with the Class A2 crown by winning three straight games, including a 2-1 decision over top-seeded Batavia in the sectional final played May 27. No. 3 Aquinas eked out its one-run victory behind pitcher Max Swartz’s complete game and some stellar defensive plays. The Irish scored their runs in the second and fourth innings.

In previous sectional contests, Aquinas won 11-2 over No. 11 Eastridge in quarterfinal play May 20 followed by a 7-4 semifinal victory over No. 10 Honeoye Falls-Lima May 24.

Following its sectional title win, Aquinas rolled to a 6-0 shutout of Canandaigua in the state Class A qualifier game May 31 behind a two-hitter from Swartz.

The team’s stirring post-season run was finally ended by Williamsville East of Section 6, 9-4, in state quarterfinal action June 4. Aquinas wrapped up its season with a record of 13-9.

The Knights won their second consecutive Section 5 Class A crown May 26, amassing 312 strokes to edge out second-place Pittsford Sutherland’s 316 total.

McQuaid’s Colin Dubnik went on to place ninth at the state championships held June 5-6. His two-day total was 149, the best finish of any golfer from Section 5.

The Crusaders successfully defended their Section 4 Class D title May 26, totaling 415 strokes to win by 34. Mike Stearns led Notre Dame with a round of 75, which placed him second individually.

Also of note was Notre Dame’s 14-0 record in dual meets this season. The Crusaders now have a meet winning streak of 72.

Aquinas boys’ lacrosse reached the Section 5 Class C final. The Irish, seeded No. 3, won 10-5 over No. 6 Bath in quarterfinal action May 25 behind six goals from Elliot Clemmons. Next came a 14-1 semifinal rout of second-seeded Wayne May 28 as eight different Little Irish players scored. In the title game June 1, AQ could not hold a 4-3 halftime lead and fell 9-7 to top-seeded Penn Yan. Aquinas’ final record was 16-3.

Notre Dame girls’ track placed second in the Section 4 Class C meet May 26. Event winners for ND were Chase Yoder in the 1,500 run and Anna Lackner in the discus along with the 1,600 relay. Meanwhile, the Notre Dame boys’ 3,200 relay placed first in Class C.

Aquinas boys’ track was led by Warren Carter’s first-place finish in the 110-meter hurdles at the Section 5 Class B championships May 27.