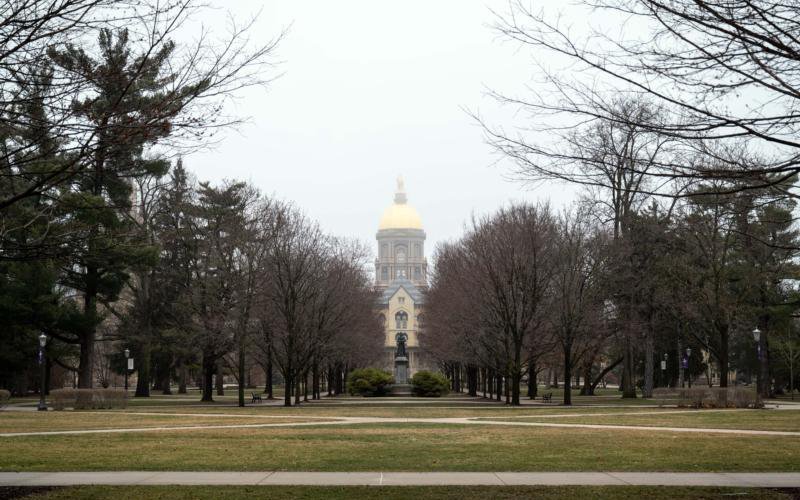 SOUTH BEND, Ind. (CNS) — The University of Notre Dame has withdrawn as the host site for the first presidential debate, with its president saying the health precautions required because of COVID-19 “would have greatly diminished the educational value” of having the debate on campus.

The Sept. 29 debate will now take place at the Health Education Campus in Cleveland and will be co-hosted by Case Western Reserve University and the Cleveland Clinic, according to the nonpartisan Commission on Presidential Debates. It will be the first of three presidential debates between President Donald Trump, the Republican nominee, and former Vice President Joe Biden, the presumptive Democratic nominee.

“Regrettably, I have decided to withdraw the University as the host site,” Holy Cross Father John I. Jenkins, Notre Dame’s president, said in a July 27 statement.

“I have made this difficult decision because the necessary health precautions would have greatly diminished the educational value of hosting the debate on our campus,” the priest said. “The inevitable reduction in student attendance in the debate hall, volunteer opportunities and ancillary educational events undermined the primary benefit of hosting — to provide our students with a meaningful opportunity to engage in the American political process.”

Father Jenkins said his decision came after consulting with Dr. Mark Fox, deputy health officer for St. Joseph County, which is where Notre Dame is located. The priest said he also has the unanimous support of the Executive Committee of school’s board of trustees.

He thanked the members of the university community “who have devoted countless hours to planning this event, and to the Commission on Presidential Debates leadership for their professionalism and understanding.”

“But in the end, the constraints the coronavirus pandemic put on the event — as understandable and necessary as they are — have led us to withdraw,” Father Jenkins stated, adding that despite the decision, he hopes “we will all remain attuned to the many important issues facing our nation during this election year — and, please, let’s exercise our right and privilege to vote on Tuesday, Nov. 3.”

According to the Commission on Presidential Debates, all of the debates will be 90 minutes long, from 9 p.m. to 10:30 p.m. (EDT), with no commercial breaks. The will be broadcast by the White House pool networks. The commission also said the Cleveland Clinic is serving as its health security adviser for all four debates.