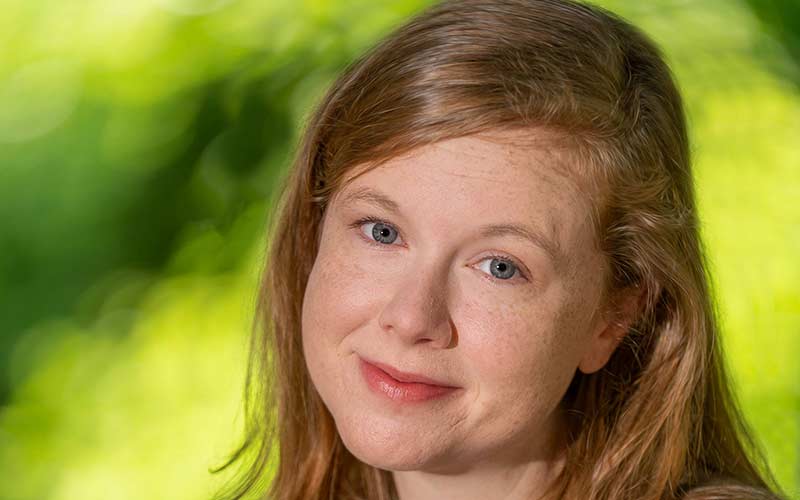 Katy Carl is author of the novel, "As Earth Without Water," and editor of "Dappled Things," a quarterly Catholic-themed journal. (CNS photo courtesy Katy Carl)

Editor’s Note: This is the last part of a three-part series focusing on contemporary Catholic writers

The path from editorial and magazine work to literary fiction has been a slow but steady one for cradle-Catholic Katy Carl.

Carl’s highly anticipated debut novel, “As Earth Without Water,” was released in the fall of 2021 by Wiseblood Books, a Wisconsin-based publisher specializing in Catholic arts and letters.

While the novel was a long time coming, it represents the culmination of the author’s extensive writing and her lifetime experience with the Catholic faith.

Carl was born and raised in Mobile, Alabama, and later studied creative writing at St. Louis University. After graduation, she settled in the Washington metro area for editing and writing work. Today she resides in Houston with her husband and four children.

The new author is partway through a Master of Fine Arts program at the University of St. Thomas in Houston.

When not plotting future stories or tending to her family, Carl serves as editor of “Dappled Things,” a quarterly Catholic-themed journal highlighting the work of neophyte writers.

“It’s been a real gift to be able to work with the journal and develop certain relationships,” Carl told Catholic News Service. “Part of the reason (the magazine) exists is to get young or emerging writers to stay in touch and become aware of each other’s work.”

In a further effort to establish her Catholic bona fide, Carl in November 2021 released the devotional work, “Praying the Great O Antiphons.” Published by the Catholic Truth Society, the book focuses on devotional readings for the season of Advent.

“When CTS asked me for some reflections on the O Antiphons — ancient monastic texts that I find so beautiful — the project felt like something I should say yes to. … My hope is that once they open up the text, readers can find nourishment for their own souls within the prayers’ original words.”

But it’s the release of “As Earth Without Water” that is bringing Carl to the attention of purveyors of Catholic arts and letters.

Carl began work on the novel in 2004 but set it aside to start a family and pursue work as an editor and freelance writer.

A key factor in completing the work was Carl’s involvement with the Wiseblood Books writer in residence program, a one-year residency fostering development of emerging Catholic writers and poets. Carl was Wiseblood’s inaugural writer in residence in 2020. The residency provided a healthy mix of inspiration, feedback and encouragement allowing the author to fine-tune her manuscript.

With its action taking place over 10 years, the story follows the relationship between two former artists and lovers, Dylan Fielding and Angele Solomon, who reconnect after a long separation.

In a startling turn of events, one-time successful artist Dylan resurfaces as Brother Thomas Augustine at an upstate New York monastery. Weeks away from his ordination, Dylan appeals to his estranged lover and former colleague to join him for a brief rendezvous on the monastery grounds.

Although incredulous that the ambitious, cavalier Dylan has chosen a stark new life, Angele agrees to the meeting only to discover his horrible secret.

Dylan confesses to having been sexually abused by a priest from outside the monastery community, leaving him devastated and uncertain about his future. But as Angele and Dylan come to terms with the situation, they begin to reflect on their relationship and come to a vague understanding of such issues as betrayal, forgiveness and a striving for redemption.

In a real sense, “As Earth Without Water” is the story of conversion for both protagonists. As Carl describes her Angele character, “She was raised in a post-Christian atmosphere; she represents a post-secular worldview held by many, in which you would like to believe in something but the content of belief is not very well defined, and often there is a certain anger and resistance around authority telling you what to do.”

Carl was effusive about the Catholic influence in the development of her new book. “There are all these conversations floating around about the revival of the Catholic novel, and I’ve been thinking about what these questions mean for writers in the 21st century,” she said.

“As I’m immersed in certain kinds of Catholic environments and have been throughout my life, it would have been difficult to the point of impossibility for me to sideline those questions and not have them emerge. So I just decided to go ahead and embrace it.”

Undoubtedly some of the plot in Carl’s book was influenced by the priestly abuse scandals that rocked the Catholic Church in the 1990s and beyond. While not making light of the scandal, Carl in her author’s note offers some of her hopes for the book’s objectives.

“My heart breaks for those who have known betrayal at the hands of those who should have been trustworthy,” Carl writes. “My hope for this novel is that it may ease burdens rather than to impose them; to ease communication of truth (and) to heal rather than to harm.”

For the future, Carl has a book of short stories on the go, with a second full-length novel following behind. Whatever the finished products, Carl’s deep faith will no doubt find expression.

“The artist is the material out of which the work is made. All you have to work with in the final analysis is what you are and what you have experienced, directly or through the imagination; in that sense, I had to work with what I had.”

(Mike Mastromatteo is a writer and editor from Toronto).