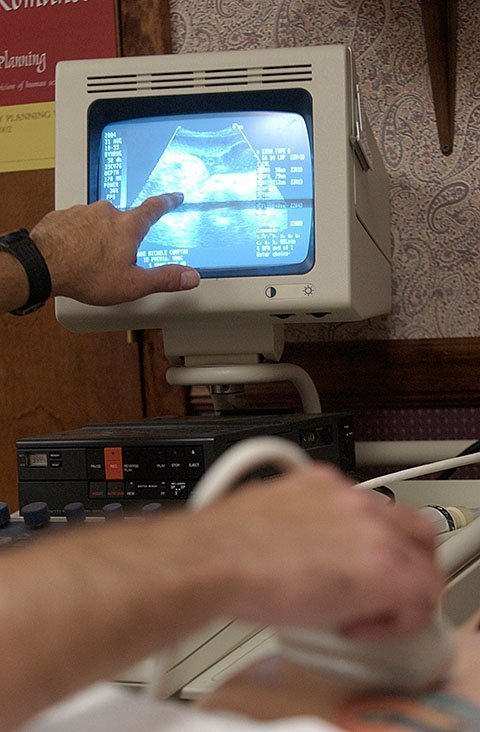 A physician administers an ultrasound in a doctor's office in Montour Falls, N.Y., in this file photo. The U.S. Supreme Court declined to consider a challenge to a ruling that overturned an Oklahoma law requiring women who seek an abortion to get an ultrasound.

OKLAHOMA CITY (CNS) — Oklahoma City Archbishop Paul S. Coakley called it "gravely disappointing" the U.S. Supreme Court declined to consider a challenge to a ruling that overturned an Oklahoma law requiring women who seek an abortion to get an ultrasound.

By declining to hear the appeal, the high court "declined to support a law that would assist and affirm women as they face a serious moral dilemma," the archbishop said in a statement.

The 2010 law was passed in April that year and in May, a district court judge granted a temporary restraining order against it. The court issued a permanent injunction in March 2012. The Oklahoma Supreme Court upheld the lower court’s ruling in December 2012.

Using the state Supreme Court’s logic, he wrote, all abortion regulations would be ruled out "no matter how medically sound or minimally burdensome of the right recognized in Roe v. Wade," the 1973 decision, with its companion ruling, Doe v. Bolton, that legalized abortion virtually on demand across the United States.

In a statement sent to Catholic News Service Nov. 18, Archbishop Coakley said: "A woman who seeks an abortion is often very vulnerable, and women who have had abortions are at increased risk of anxiety, depression and substance abuse.

"We have a responsibility to ensure that no one is deceived or exploited to advance a particular agenda," he continued. "Providing a woman who faces an unexpected pregnancy with additional information about her child in the form of an ultrasound and medical description aims to fulfill this responsibility."

"Precisely because we uphold the dignity and equality of all persons, we respect, protect and support women in their unique and privileged capacity to bear children," he added.

Under the now-overturned law, a physician or certified medical technician had to perform "an obstetric ultrasound on the pregnant woman, using either a vaginal transducer or an abdominal transducer, whichever would display the embryo or fetus more clearly."

The woman would also have to be given an explanation of the procedure and what the ultrasound was showing and allow the woman to see the ultrasound images.

The Center for Reproductive Rights in April 2010 filed a legal challenge to block the law on behalf of three plaintiffs — a nonprofit advocacy group, an abortion doctor and a health clinic for women.

Earlier in November, the U.S. Supreme Court declined to review a decision by the state Supreme Court that a major portion of Oklahoma’s restrictive abortion law is unconstitutional because it effectively bans all drug-induced abortions.