Now up to the microphone: Kevin Spears - Catholic Courier 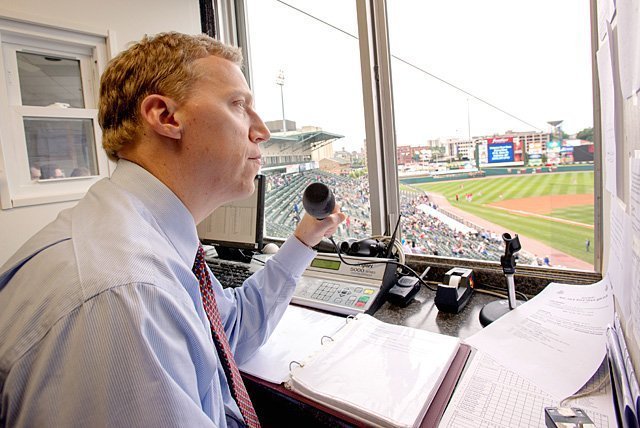 ROCHESTER — He’s worked more than 1,000 Rochester Red Wing baseball games over the past two decades and owns the most recognizable voice at Frontier Field — and yet, few fans would actually recognize him by face.

As the Wings’ longtime public-address announcer, Spears possesses a deep, smooth, classic announcer’s voice packed with ample enthusiasm designed to rev up the crowd. For instance, just before a July 8 game against the Buffalo Bisons, Spears somewhat monotonically introduced the visitors’ starting lineup — then sent a decidedly more animated tone over the loudspeakers for the home team: "And now, the starting lineup for your Rochester Red Wings!"

That evening, which ended with a 6-5 Rochester win, saw Spears kept busy with a variety of announcements such as introducing each player who came to bat; instructing spectators to rise for the National Anthem and seventh-inning stretch; and doing between-inning promotions for car dealerships, banks and other businesses.

Spears has attended to these duties for the Red Wings since 1994, and also has done public-address work since 1995 for the Rochester Americans hockey club. After all these years, he said, he’s still excited about getting behind the microphone.

"When I was a kid, I’d go to the Amerk and Red Wings games and think, ‘That would be really cool to do,’" Spears said as he sat in his announcing booth, high atop the Frontier Field stands behind home plate. "Once in a while you take a deep breath, remember being in the arena as a fan, and think how you’re now able to come here every day and do this."

Spears is equally enthusiastic about his Catholic faith, as evidenced by his widespread involvement. He assists with faith formation at his parish, St. Kateri Tekakwitha in Irondequoit; is active in the Cursillo movement; gives presentations to parish-based men’s groups; and served as publicity coordinator for the inaugural Rochester Catholic Men’s Conference this past May 16. And, although he works full time for Level 3 Communications as a commercial services manager, Spears is even able to work into his schedule part-time duties as manager of Rochester’s Catholic radio station, WHIC 1460-AM, The Station of the Cross.

Spears, 48, acknowledged that he was an inactive Catholic for much of his life until he and his wife, Karin, were preparing to start their family. They have four children ages 3 to 12.

"That really made me start thinking about my faith — asking myself, ‘Do I really believe this, and if so, how does this affect my life; what am I going to do about it?’" he said.

In a similar way, Spears’ deep immersion into announcing was not immediate. The Fairport High School graduate was a geography major at SUNY Geneseo, but took a broadcasting class that he enjoyed and by his senior year was doing public-address announcing for the college’s basketball and hockey games. Spears later spent a year in Florida as the PA announcer for a minor-league baseball team that was partially owned by comedian Bill Murray and musician Jimmy Buffett.

After moving back to Rochester, Spears auditioned for a PA opening with the Red Wings one afternoon at a deserted Silver Stadium.

"It was during my lunch hour, reading announcements and a fake lineup — to nobody," he said.

Spears got the gig, and after doing a few games in 1994 became the Wings’ regular PA man the following year. That job led to his joining the Amerks in the 1995-96 season; he eventually became the head announcer for them as well.

Those early years held plenty of memorable moments. Spears handled PA duties for the final Red Wing contest played at Silver Stadium in 1996. He also was on the mike in 1997 when the Wings clinched the Governor’s Cup in their debut season at Frontier Field — the last time the Wings won the International League title. One assignment he did miss was when the Amerks won their most recent American Hockey League Calder Cup in June of 1996. Spears had a good excuse for not being at the deciding game: He was already committed to announcing a Red Wing double-header that evening.

These days, Spears is still the main Red Wing announcer but only does a handful of Amerk games per season due to family commitments. He’s pleased with how his career and personal lives have meshed, noting that PA announcing led to meeting his wife and also has served as a gateway to several of his Catholic activities.

"I began to see that this might be a tool, a gift, that God has given me," he added. "When I finally learned how to use this gift, it’s brought tremendous blessings in my life."