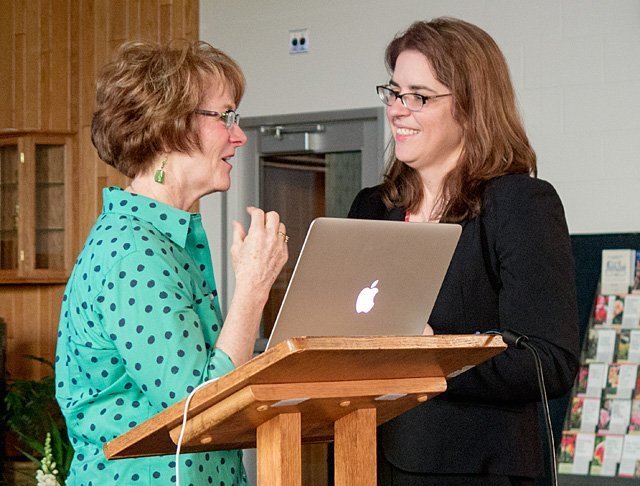 Sister Julie Vieira, with the order Servants of the Immaculate Heart of Mary, returned May 3 to her home parish, St. James, to talk about her work with the website, A Nun's Life, which helps people discern not only about religious life but about what God is calling them to do in the world.

IRONDEQUOIT– Sister Julie Vieira is following the Gospel call to "go out to all the world" (Mark 16:15).

For Sister Vieira, who professed vows with the Servants of the Immaculate Heart of Mary in 2006, that world includes the World Wide Web.

In 2006, she created A Nun’s Life, an online faith community and nonprofit ministry with fellow IHM Sister Maxine Kollasch, Sister Vieira explained during a May 3 presentation at St. James Church, where she grew up and went to school. Her parents still are parishioners at the church, which is now part of the Peace of Christ Parish.

"We have built our mission on this fundamental idea that everyone is called to a vocation that enriches the person and is also good for the world," said Sister Vieira. "Our jobs … are to take this seriously, to discover what our vocation is and allow it to grow."

Fostering a culture of vocation to help people discover what God is calling them to be — to be their best self most fully — also is the job of parishes, schools and faith communities as well as her online ministry at anunslife.org. And those vocations don’t only involve religious life, Sister Vieira explained. Being a teacher or a parent are some of the most noble vocations, she noted.

It was parental bragging about her daughter’s work that brought Sister Vieira to town, Mary Vieira said.

"I’m so totally proud," Mary Vieira added. "She’s known in so many countries. … But she’s very humble about it."

Two years after hearing about her work, Peace of Christ’s adult-formation committee members said the visit came to fruition to coincide with the Year of Consecrated Life.

"Jesus calls us to be with others," said Joyce McAndrew, who serves on the committee and introduced Sister Vieira on May 3. "She is someone I’ve grown to love through the Internet. … And she was planted, grown and watered under this roof, this sanctuary."

St. James provided that safe place where she first explored who was her best self, concurred Sister Vieira.

"This place holds many good memories for me, and in fact was the first place where I came to know Catholic sisters," she said. "I owe a debt of gratitude to this faith community for nurturing my spirituality and imagination from such an early part of my life."

At Aquinas Institute, she also began discovering other areas of interest, including social justice. She went on to earn a bachelor’s degree in religion and philosophy from the University of Toronto-University of St. Michael’s College and a master’s in theology from Regis College. In graduate school, she spent time with the Franciscan Community and was asked by a friar and a nun if she had thought about becoming a woman religious. And it was a question she hadn’t considered since she always felt she would have a family, Sister Vieira said.

Her theology studies led her to think of prayer and God differently, she said. So, she sought the counsel of a spiritual director, a nun in the order she now belongs to, said Sister Vieira.

The sister encouraged her to look at the people around her, she said, and she thought about the work of the women religious she knew in the international community at graduate school and how savvy, smart and funny they were and how strong and faith-filled their lives were. Upon further reflection, she realized how large a role nuns had played in her life and the connection she felt with the IHM sisters and their mission, she added.

"The love of Jesus unites us in community and impels us to proclaim the good news of salvation" is part of that mission, she said.

"So for me, within this mission, I found I could be most fully myself, and I could encourage other people to be most fully (themselves)," she said. "I also found out that true to our mission to be everywhere, the opportunity to minister into new territory came about. Sisters were needed on the Internet."

Almost a decade ago, few very sisters or parishes were online, she said, so, anyone who looked up information about nuns mainly found pop culture references and Halloween costume links. In light of this, she and Sister Kollasch, who are both writers and adept with technology, realized starting "A Nun’s Life" was mission territory for them.

"We need to get more stories about sisters out there," Sister Vieira said. "And what we really wanted to do was help people in their vocations. We knew how important it was to have someone who had our back, someone who was there for us, who encouraged us. And we thought we can do this for young people online."

Since its inception, the online community has grown to include interaction with people ages 15 to 90 from 160 countries and all different religious faiths through chat rooms, blogs and podcasts such as the "Motherhouse Road Trip."

The goals are to foster that culture of vocation and build relationships and increase knowledge about religious life in a spirit of love, Sister Vieira said.

"To live fully, think about the gifts and the talents you have, the stuff that geeks you out, inside you, those are all parts of what make you who you are and make you able to live fully to what God is calling you to," she said.