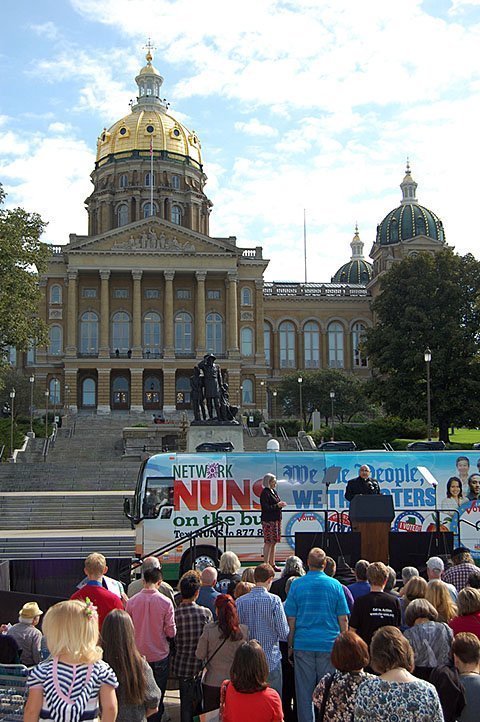 Father Michael Amadeo of Holy Trinity Parish in Des Moines, Iowa, speaks to a crowd of nearly 300 people Sept. 17 at an event launching the "Nuns on the Bus" and featuring U.S. Vice President Joe Biden. The kickoff was held at the foot of the Iowa Capitol in Des Moines.

DES MOINES, Iowa (CNS) — "We the people, we the voters" is the theme of the third "Nuns on the Bus" tour, which kicked off Sept. 17 in Des Moines with Vice President Joe Biden thanking the sisters for their effort.

The sisters began a 10-state tour promoting voter registration and participation in the political process.

"With the vice president, we share faith and a commitment to democracy," said Sister Simone Campbell, a Sister of Social Service, who is the executive director of Network, a nonprofit Catholic social justice lobby.

To Sister Simone, Biden said, "I want to thank you and all your colleagues for your commitment and fight for basic economic rights."

"It gives me renewed faith," he said on the steps of the Iowa Capitol. "It’s been a great honor to work with Sister Simone over the years on so many critical issues."

Two years ago, the "Nuns on the Bus" tour began in an effort to discuss the ramifications of a budget proposal of U.S. Rep. Paul Ryan, R-Wisconsin, which they said would have hurt social service programs that help the poor. Last year, the tour focused on immigration reform.

This year, the focus is on voter registration.

In the last eight years, there were 81 pieces of legislation in state capitols across the country that would have curtailed people’s right to vote, he said.

"The nation is strongest when everyone’s voice is heard and everyone has a seat at the table," Biden said.

Referring to Sister Simone’s book, "A Nun on the Bus: How All of Us Can Create Hope, Change, and Community," he concurred with her that the U.S. Constitution does not refer to "We the rich," "We the politicians" or "We who got here first."

"The Constitution is about ‘We the people.’ It sounds corny but that’s exactly what it is," said Biden. "That’s why the work to increase voter registration is so important."

The vice president also focused on equality and the middle class.

On minimum wage, Biden said: "There’s no reason in the world any American should work 40 hours a week and be $7,000 below the poverty rate. That should not happen in America."

Despite the fact that the nation’s gross domestic product is up by 20 percent in recent times, middle class wages have only gone up by about 14 cents on average, Biden added.

"Productivity and growth have gone up, but wages are flat," he said.

He also lamented the lack of consensus among political parties.

"The middle class and poor have taken a hit. They share a lot less," he said.

Biden began his remarks noting he had 12 years of Catholic schooling.

Cox is editor of The Catholic Mirror, newspaper of the Diocese of Des Moines, and Collins is a multimedia journalist on the Mirror staff.

Tags: Election News, Religious Orders
Copyright © 2022 Catholic News Service, Inc. All rights reserved. Linking is encouraged, but republishing or redistributing, including by framing or similar means, without the publisher's prior written permission is prohibited.