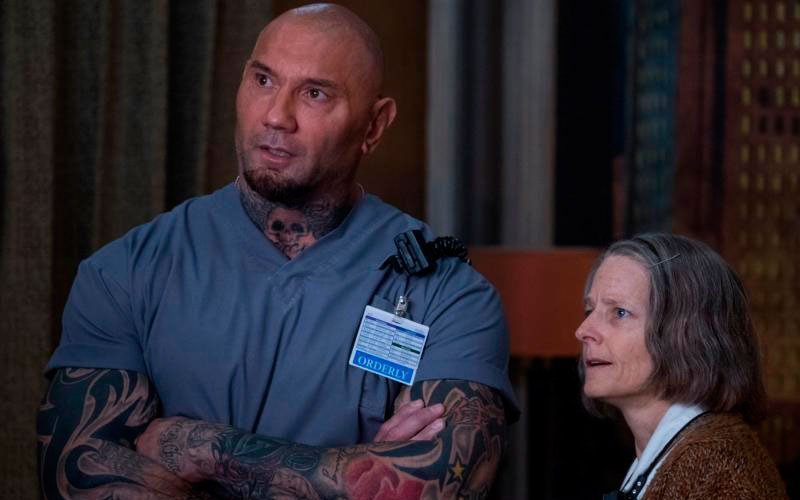 NEW YORK (CNS) — Viewers who check themselves into the “Hotel Artemis” (Global Road) may wind up feeling like prisoners of their own device.

Though this dystopian thriller, set in the near future, gets off to a stylish start, and features a couple of strong performances, by the time its hyperviolent conclusion is reached, gore and bone-crunching have replaced creativity.

There’s no pink champagne on ice at the long-decayed Los Angeles hostelry of the title. Instead it serves as a secret, strongly secured hospital for criminals.

As writer-director Drew Pearce’s riot-torn version of La La Land spirals into chaos, a cross section of underworld types seeks shelter there, under the protection of the clinic’s troubled, eccentric head nurse (Jodie Foster) and the muscle-bound orderly (Dave Bautista), nicknamed Everest, who enforces her strict rules. (To maintain anonymity, everyone at the Artemis, so we discover early on, goes by either a title or a code name.)

Foster’s blend of toughness and vulnerability is compelling. Though her character easily keeps her hardened charges in line, she has a tragic backstory and a crippling fear of venturing into the outside world. And Goldblum is predictably enjoyable as he oozes understated wickedness.

But action for its own sake takes over in the end, and some of the rub-outs are quite gruesome. By the time of a set piece during which Boutella’s besieged femme fatale seemingly fells more attackers than her countrymen did at the Battle of the Somme, any pretense to inventiveness has faded away.

So, too, has whatever social point Pearce may be trying to make with a subplot about an evil corporation depriving the City of Angels’ poorer citizens of their water supply, thus sparking the widespread unrest.

The film contains much bloody, sometimes grisly, violence, drug use, sexual references, about a dozen profanities, at least one milder oath and pervasive rough and crude language. The Catholic News Service classification is L — limited adult audience, films whose problematic content many adults would find troubling. The Motion Picture Association of America rating is R — restricted. Under 17 requires accompanying parent or adult guardian.