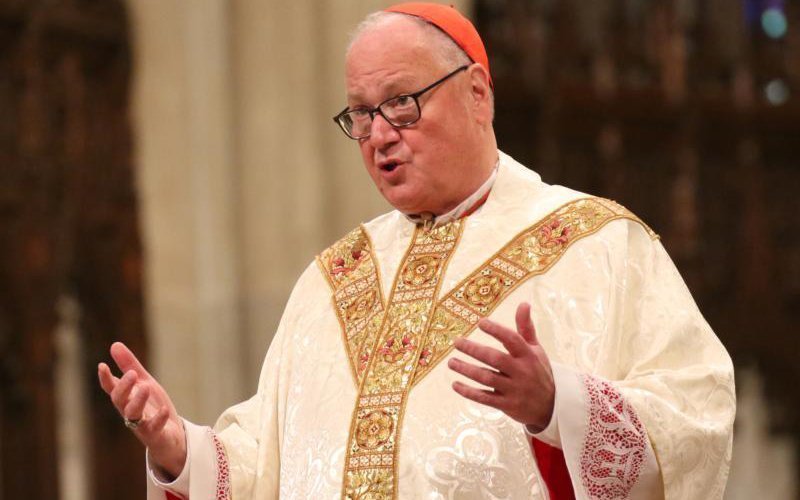 Cardinal Timothy M. Dolan, pictured in a June 7, 2018, file photo, announced Feb. 4 the closing of seven schools within the Archdiocese of New York. (CNS photo by Gregory A. Shemitz)

WASHINGTON (CNS) — In the First Letter of Peter, we read: “Beloved, do not be surprised that a trial by fire is occurring among you, as if something strange were happening to you. But rejoice to the extent that you share in the sufferings of Christ, so that when his glory is revealed you may also rejoice exultantly.”

“Today we made the painful announcement that seven of our beloved Catholic schools in the Archdiocese of New York are not going to reopen next fall. … These are painful and difficult decisions and I ask for your prayers for those especially impacted,” in text accompanying the video.

“You know, I’d rather be opening some new ones instead of closing the gems that we’ve got, but reality sets in,” Cardinal Dolan said in thevideo.

But he noted a silver lining in the situation. In particular, he mentioned that all “the kids in the schools that are closing are going to be able to go to another Catholic school nearby, all but one.” The displaced students would be welcomed “immediately (and) enthusiastically” to their new learning environments, he said.

Overall, Cardinal Dolan said, the archdiocese will have “a few less Catholic schools, but the ones we got are more vibrant and sturdy than ever.”

Of course, he continued, “that doesn’t erase the pain of our parents, and our beloved teachers, our principals, and especially our students.”

In a news release, the archdiocese cited financial and operational issues, as well as problems with school buildings as reasons for the decision.

Joseph Zwilling, director of communications, said that underlying these factors, “all (closings) were enrollment driven.”

Cardinal Dolan addressed the subject of declining enrollment in his video, stating that the closures could have been avoided “if we had 10 percent more kids in each of those schools.” He then encouraged all Catholics of the archdiocese to consider sending their children to Catholic schools if they don’t already.

At the end of his video, Cardinal Dolan emphasized one more factor he said hurts the growth of archdiocesan schools: “The injustice … continues that we don’t get a dime from the government to support our wonderful schools.”

Zwilling said the cardinal was referring to “the fact that in New York, any efforts to have the government provide for Catholic or other religious schools have all failed in (the) state Legislature.” Among these efforts was a push to institute a tax credit that would have lifted a portion of the tuition burden off the shoulders of low- to middle-income parents who chose private schools for their children.

Called the Education Investment Tax Credit when it was proposed in 2016, the bill would have given half of the money that the bill reserved for credits to those who had donated money to private-school scholarship programs.

James Cultrara, director of education at the New York State Catholic Conference, said in an email that despite having support from both parties in the New York Legislature and the blessing of Gov. Andrew Cuomo, “the measure was not adopted as lawmakers were considering a broad range of competing interests.”

Had it been adopted, Cultrara said “we would likely not be in the desperate position of having to close schools that parents want their children to attend.”

Archdiocesan schools “have always had to get by on a limited budget” amid declining enrollment rates, Zwilling said..But the resulting resourcefulness can be chalked up to “a great deal of dedication on part of the parents and excellent teachers we have,” he added.