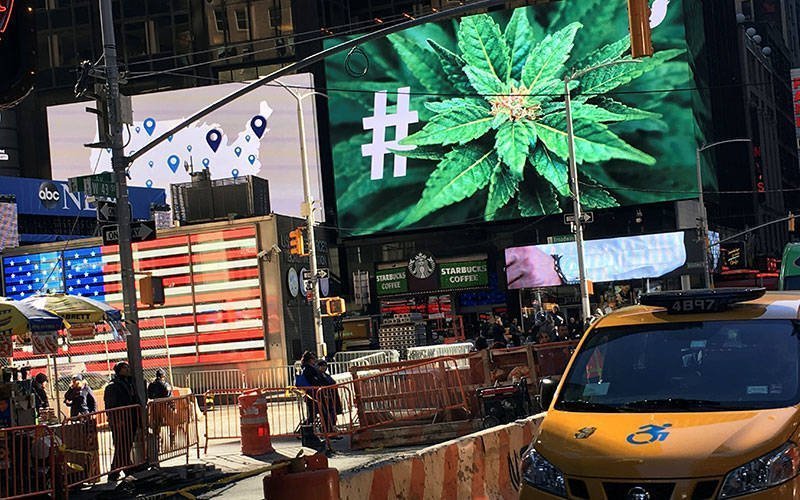 In this 2016 file photo, a billboard in New York City displays a marijuana hashtag. The New York State Catholic Conference called on the state’s legislators to reject any proposal that would legalize recreational marijuana use. (CNS photo by Shannon Stapleton/Reuters)

The New York State Catholic Conference is urging Catholics to speak out against proposed legislation that would legalize recreational marijuana in New York. The Catholic conference, which represents the state’s bishops in public-policy matters, previously had spoken out against similar legislation when it was proposed in 2019.

“We stand by our 2019 statement, in which we urged the legislature to reject such a plan, citing consequences from increased teenage and childhood use, impact on developing brains, natural progression to harder drug use, and increased impairment-related transportation accidents and deaths,” the Catholic conference stated in a March 15 memo of opposition to the currently proposed legislation.

The Marijuana Regulation and Taxation Act — S.854/A.1248 — would make a number of changes to how marijuana is treated in both penal law as well as public-health law. Among those changes would be:

• the licensing of persons authorized to produce, process, distribute and sell cannabis to people 21 and older;

• the amendment of the penal law in relation to the growing and use of cannabis by people 21 and older;

• the imposition of an excise tax on certain sales of cannabis;

• the creation of a new office of cannabis management; and

The Catholic conference believes the push to legalize recreational marijuana will “open a Pandora’s Box that will have multiple deleterious effects on individuals, families and all of society,” according to the statement it released in 2019.

“While the Governor and some legislators see enhanced revenues for the state’s coffers through a new taxable marijuana industry, we are more concerned with consequences ranging from increased teenage and childhood usage, harmful effects on developing brains, addiction, natural progression to harder drug use, increased impairment-related transportation accidents and deaths, and other potential public-health and safety issues,” the Catholic conference stated in 2019.

The Catholic conference was concerned that legalizing recreational marijuana use would normalize it and have an adverse effect on children, according to the statement.

“Proponents argue that usage will be restricted to age 21 and older, but, as we have seen in the alcohol and tobacco industries, producers of harmful products always find a way to market their products to children,” the Catholic conference stated.

“New York’s medical, education and law-enforcement communities have urged the state to reject recreational marijuana legalization, and so does the New York State Catholic Conference,” the Catholic conference stated March 15.