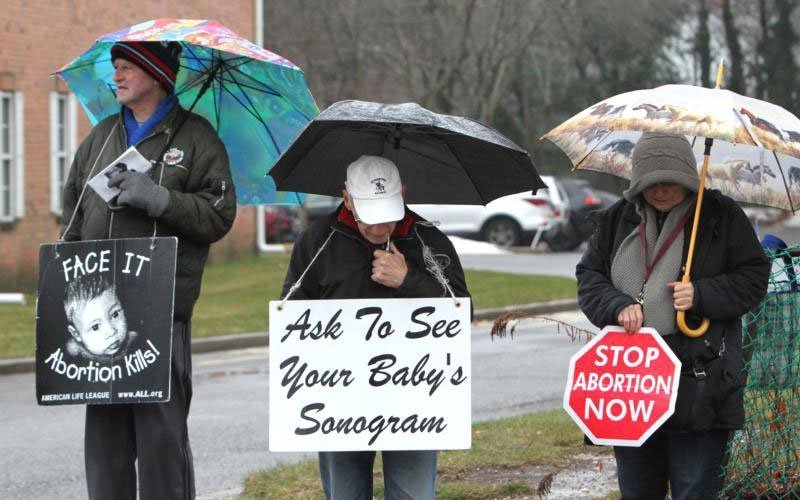 Pro-life advocates gather in silent witness near the entrance of a Planned Parenthood center in 2018 in Smithtown, N.Y. (CNS photo by Gregory A. Shemitz)

Dear sisters and brothers in Christ:

Buoyed by the enthusiasm of so many participants, young and old alike from all walks of life and with a large representation from our diocese in the recent Masses and events in this year’s March for Life in Washington, D.C., I returned to New York only to become so very saddened by the recent legislative passage of the Reproductive Health Act and Governor Cuomo’s signing it into law. In union with my brother bishops in this Metropolitan Province of the Archdiocese of New York, I reiterate the statement issued January 22, 2019, on this tragic development by the New York State Catholic Conference, which represents the Bishops of New York state in public policy matters:

“Today, New York State has added a sad chapter to this already solemn date of January 22, the anniversary of Roe v. Wade. With the legislature’s passage, and Governor Cuomo’s signing of the Reproductive Health Act, our beloved state has become a more dangerous one for women and their unborn babies.

“Many of the state Senators and Assembly Members who voted for this abortion expansion are mothers themselves, who felt their child toss, turn and kick in their womb, and delighted in the progress of their pregnancy. Many others, as well as our governor, are fathers, who held their partner’s hand as they viewed the ultrasound videos, watched their child squirm and rejoiced at the first sound of a heartbeat. Many of these same officials were themselves born into less-than-perfect conditions ‚Äì poverty, health problems, disabilities, broken families. All overcame these issues to rise to leadership in our state, because their parents chose life for them.

“We thank all of our partners in the 12-year-long fight to stop this horrendous policy, and all pro-life New Yorkers who made their voices heard in an effort to stop it. Let us all pray for the conversion of heart for those who celebrate this tragic moment in the history of our state. And we pray in a special way for the lives that will be lost, and for the women of our state who are made less safe under this law.”

Sadly, the abortion rate in New York state is already more than twice the national average. The Reproductive Health Act has detrimental consequences for pregnant women and their unborn children, allowing non-doctors to perform abortions and permitting abortions for any reason in the third trimester of pregnancy right up to a mother’s due date. It removes our state’s protections for infants born alive in the course of an abortion. Despite this legislation, it remains our duty as believers in Jesus to support life and the courageous women who seek our pastoral assistance as they deal with complex life issues.

Being a disciple for life, reverencing human life from the very moment of conception until natural death, truly is a fulfillment of our baptismal commitment and, in the words of Mother Teresa of Calcutta, “creating something beautiful for God!” The termination of life in the womb, euthanasia, violence, war, abuses against people, the death penalty and a general degradation of the moral order are all a result of a deep lack of respect for the integral dignity and worth of the human person as God’s noblest creation.

Those who rightly and justly oppose the destruction of life on any level hold that human life merits protection against any attack that threatens this life because human dignity is intrinsic. “It is a dignity that has to be attributed to the human being because of the kind of being that he or she is. Intrinsic dignity is not conferred or earned. It is a dignity that is simply recognized and is attributed to every human being regardless of any other considerations or claims. Intrinsic dignity is a dignity that can only be possessed in an absolute sense ‚Äì one either has it completely or does not have it at all ‚Äì since one is either a human being or not one at all. There is no such thing as partial human dignity since there is no such thing as a partial human being” (Report from the Committee on Science and Human Values, Dialogue on Stem Cell Research, September 2005, U.S. Conference of Catholic Bishops).

For more than four decades now, people in these United States have been taught that the taking of human life is moral, acceptable and legal. What a tragic lesson to have taught our children over these years. One has to ask: Who bears the greater responsibility for this tragedy? Those who have suffered through the harsh ordeal of the termination of life or those who have taught others that the destruction of human life is not only acceptable, but also have worked to make immoral procedures legal? We need to be empathetic and understanding to those whom we have failed to teach, to support in their time of need, to show the face and the wisdom of God with a loving heart. How can our young people have an appreciation for life if they have not been taught both by word and example that this life, our life, is a precious gift from God?

This tragic legislation does not change what Jesus Himself has taught: All life is sacred. When we assume the role that belongs only to God, we create a culture in which all protection for life is either threatened or destroyed. This recent legislative defeat does not mitigate or exonerate us from our continued efforts in the service of human life.

In his recent State of the State address, our governor expressed his solidarity with our Holy Father, Pope Francis, who has spoken firmly in support of the church’s ongoing efforts to address the tragedy of clergy sexual abuse and being a true instrument of healing for the victims and all so deeply affected by this scandal. We pray that our governor also will stand in solidarity with Pope Francis who just recently addressed these words to those gathered for the Paris March for Life: “All the evil in the world is summed up by contempt for life. ‚Ä¶ Despite attempts to trivialize abortion, this gesture poses a true case of conscience to the whole civil society. The march aims to be an appeal to French citizens to be open to receive life, and uphold the right to conscientious objection.”

The church and our diocese work to serve life at all stages. In addition to our efforts to protect the unborn child, our Diocesan Public Policy Agenda this year draws our attention to three other deeply concerning issues:

‚Ä¢ The exclusion of farm workers from the basic labor rights that the rest of us take for granted;

‚Ä¢ The continuing tragedy of the opioid epidemic.

For more information about the Diocesan Public Policy Committee and the 2019 initiatives, please go to https://www.dor.org/about/office-ministry-directory/catholic-charities/public-policy-committee/.

There are many who find politics uncomfortable, but being engaged, responsible citizens is part of our obligation both as citizens and as Catholics. The world needs people who help to shape our communities, not for any partisan bias, but because they heed our Savior’s call to compassion and respect for the dignity of all people.

When life is threatened in any way, whether by abortion, racism, violence, drug addiction or poverty, Catholics are called to speak up and stand with those who are being oppressed. Please support the work of our Public Policy Committee.

Praying that we never stop rejoicing in God’s gift of life and His creation, and continuing our pro-life efforts, I remain

Sincerely yours in Christ,