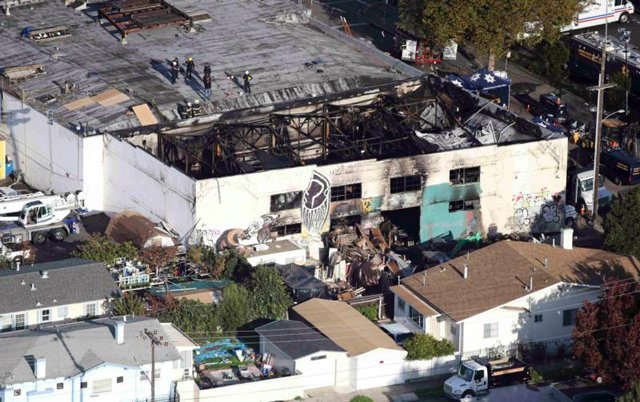 Recovery teams examine the charred remains of a two-story converted warehouse Dec. 4 in Oakland, Calif. A blaze at the building Dec. 2 claimed the lives of at least 33 people.
By Catholic News Service
OAKLAND, Calif. (CNS) — In response to the Dec. 2 fire that erupted in an Oakland warehouse, Bishop Michael J. Barber of Oakland said in a statement that his "prayers and thoughts are with all those who have died or are suffering from the tragic fire."
"We also pray for the first responders, medical personnel and others who are aiding the victims and their loved ones. We will be remembering the deceased in our Masses this weekend throughout the Diocese of Oakland," he said in a Dec. 3 statement.
As of Dec. 6, the death toll was 36 and officials said that no additional bodies have been recovered.
The fire started during a dance party at a warehouse that had been converted to artists’ studios and illegal living spaces, dubbed the "Ghost Ship." The cause of the fire, reported to be the most lethal building fire in the U.S. in more than a decade, has not been determined.
"We owe it to the community and those who perished in this fire, and those who survived the fire to be methodical, to be thorough, and to take the amount of time it takes to be able to look at every piece of potential evidence," said Alameda County District Attorney Nancy O’Malley, according to The Associated Press.
Hundreds attended a vigil Dec. 5 at Oakland’s Lake Merritt for those who died in the fire.
Copyright © 2022 Catholic News Service, Inc. All rights reserved. Linking is encouraged, but republishing or redistributing, including by framing or similar means, without the publisher's prior written permission is prohibited.