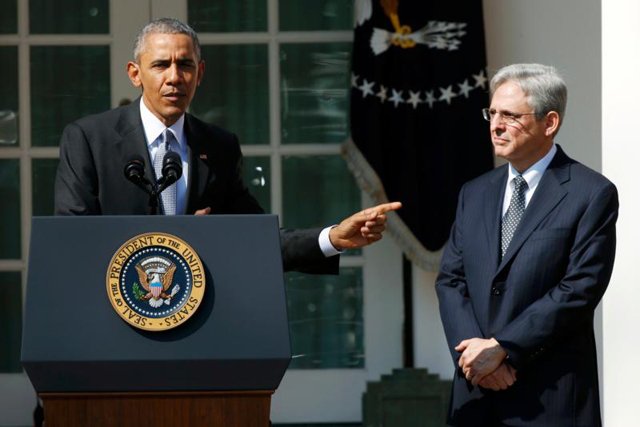 U.S. President Barack Obama announces Chief Judge Merrick B. Garland of the U.S. Court of Appeals for the D.C. Circuit as his nominee to the U.S. Supreme Court March 16 in the Rose Garden at the White House in Washington.
By Carol Zimmermann
Catholic News Service
WASHINGTON (CNS) — When President Barack Obama announced Judge Merrick Garland as his Supreme Court nominee in the White House Rose Garden March 16, his praise for the candidate was coupled with an urgent plea that members of the U.S. Senate give Garland a fair chance.
The president said he took seriously his responsibility to find a nominee to replace the court seat vacated by the death of Justice Antonin Scalia in February. He said Garland, the chief judge for the U.S. Court of Appeals for the District of Columbia Circuit, was perfectly suited for the high court calling him "one of America’s sharpest legal minds" who "brings to his work a spirit of decency, modesty, integrity, even-handedness, and excellence."
He also said the appeals court judge had a "track record of building consensus" that has earned him respect from leaders on both sides of the political spectrum.
After the announcement, Garland’s qualifications were hardly being disputed in the statements released from Senate offices. Instead, Republican senators who had said they would not support any nominee presented by President Obama stuck to their principles that the issue was timing, not a nominee’s qualifications.
"This has never been about who the nominee is. It is about a basic principle," said House Speaker Paul Ryan, R-Wisconsin, saying he supported
Republican Senate leaders in their decision not to move forward with the confirmation process and to the let American public decide when they vote for the next president.
"No one is better suited to immediately serve on the Supreme Court," a White House official told reporters in a telephone press call after the announcement, adding that Garland has "more federal judicial experience than any other Supreme Court nominee in history."
On face value, Republicans wouldn’t have much to dislike and liberal Democrats might be more disappointed if they were looking for someone younger or more diverse than Garland, a 63-year-old white Jewish male. If he clears the nomination process, Garland would join three Jewish judges and five Catholics at the high court’s bench.
Since Scalia’s death, there has been plenty of speculation about who would replace him and how that would influence future court rulings, which Obama noted when he announced the new nominee.
He said Scalia’s "outsized role" and the fact that many Americans are divided on a number of issues before the court makes it tempting to make the confirmation process "simply an extension of our divided politics."
"But to go down that path would be wrong," Obama said. "It would be a betrayal of our best traditions and a betrayal of the vision of our founding documents."
If Senate leaders refuse to confirm Garland, awaiting the election of the next president, it will leave the court with a vacant seat and at a predicted standstill.
Meg Penrose, a law professor at Texas A&amp;M University’s School of Law, told Catholic News Service in a recent interview that the current court is not operating at its "full strength" when it is has a crucial role to "help us as nation especially when dealing with federal law."
The predicted 4-4 votes from the current eight-member court "puts everything of critical importance in a holding pattern," she added, noting that with split decisions, the lower court rulings will stand and "it will be as if the court did not even take the case."
She said issues currently before the court call for clear direction.
One case of particular interest to Catholic leaders, which comes too soon for any current nominee to weigh in on, is the lawsuit bought by several Catholic and other religious entities against the Obama administration’s contraceptive mandate. The Supreme Court will hear oral arguments in the case March 23.
Coincidentally, Garland in 2012 was a member of a three-judge panel at the U.S. appellate court, which ruled that a lawsuit by two religious colleges challenging the contraceptive mandate would remain pending. The judges said they would hold the government to its word that it planned to modify enforcement of the mandate for some religious employers.
During oral arguments, Garland raised the idea of sending the cases back to the federal district court, with instructions to put the cases on hold, which he said would prevent the need for the cases to be refiled anew should the colleges object to a rewritten rule.
– – –
Follow Zimmermann on Twitter: @carolmaczim.
Copyright © 2023 Catholic News Service, Inc. All rights reserved. Linking is encouraged, but republishing or redistributing, including by framing or similar means, without the publisher's prior written permission is prohibited.