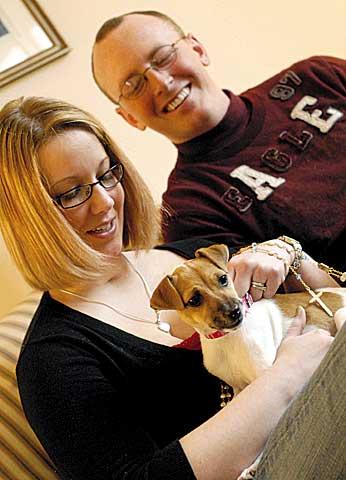 Nicole and Brenden Flynn, parishioners of St. Mary Church in Waterloo, spend some time at their Seneca Falls home with their new puppy Lexi on March 23.

SENECA FALLS — It’s easy to say, "Everything happens for a reason." It can be another thing altogether to really believe those words in the midst of challenging situations.

That is exactly what Brenden and Nicole Flynn have done, however. The young couple already have seen more than their share of obstacles, but through it all they’ve maintained a strong faith in God’s mercy and his plan for their lives. This plan already has taken them through a pair of life-changing accidents that left Brenden and Nicole with traumatic brain injuries, but they believe it also brought them together and facilitated their Sept. 18, 2009, wedding at St. Mary Church in Waterloo.

"Brenden and Nicole Flynn have an amazing story to tell about tragedy and faith," said Father James Fennessy, pastor of St. Mary Parish and St. Patrick Parish in Seneca Falls.

Brenden’s path began to lead him toward Nicole on May 31, 2002, when Brenden and his best friend were involved in a horrific accident. A woman driving a Ford pickup truck ignored a yield sign and rammed into the passenger side of Brenden’s Honda Civic.

"She split my car in half and threw me and my friend out the back and into a ditch," Brenden told the Catholic Courier during a March 23 interview at the Flynns’ Seneca Falls residence. He leafed through an album of photographs taken by first responders at the scene and pointed to one photo that showed the mangled rear half of the car lying in the field where it came to rest after the impact.

Brenden’s friend succumbed to his injuries later that day; meanwhile, 18-year-old Brenden lay comatose in a hospital bed. His prognosis was bleak, and doctors told his family that even in the unlikely event that Brenden did live, he likely would spend the rest of his life in a nursing home.

Shortly after that a nurse was praying over Brenden when out of the corner of her eye she saw a tall, mysterious white figure leave the room.

"As soon as the figure left, for some reason my vital signs went right up that moment, and from that day on I got better," Brenden said.

The road to recovery was still challenging, however, and even after he awoke from his coma Brenden wasn’t immediately able to speak. He and his family didn’t give up hope, however, and one day after his mother touched a relic of Blessed Kateri Tekakwitha to his throat, he spoke his first word since the accident.

Brenden was released from the hospital Sept. 6, 2002, and by September 2007 he was living on his own in Rochester and had not yet met his future wife, Nicole Vanderwall.

"Life was not good. I was so lonely and kept praying to find someone, and then I found this one," Brenden said, gesturing at his wife, who was seated next to him on their couch.

In September 2007, Nicole was recuperating from her own accident. She’d been struck by a car while crossing a street in Newark on June 27, 2007, four days after her high-school graduation. Her friends formed a circle and prayed as Mercy Flight airlifted her to the hospital.

Nicole had already faced challenges in her young life: Her mother lost her parental rights when Nicole was 6 years old, and her father had abandoned her when she was 13. She persevered through these hardships, but after her accident, she lay unresponsive in a coma, just as Brenden had five years earlier.

"I wasn’t supposed to ever come out of the coma. I was supposed to be in a vegetative state the rest of my life," Nicole told the Courier.

Nicole fought her way back to health, however, and after leaving the hospital she became involved with Bridges for Brain Injury, a Canandaigua-based organization that provides services and support for individuals with brain injuries. She was working with the organization’s Wildlife Defenders program in September 2008 when she met Brenden, who was giving a presentation on the program’s exotic animals.

The two hit it off, and Brenden asked Nicole to marry him a month after they began dating. Nicole, who had a strong faith in God but was not familiar with Catholicism before meeting Brenden, went through the Rite of Christian Initiation of Adults and was received into the Catholic Church at the 2009 Easter Vigil. She and Brenden were married a few months later.

"I would never have met her if (the accident) didn’t happen," Brenden said. "God’s funny. Everything happens for a reason."

Brenden said he’s never questioned what happened to him, because he believes he was headed down the wrong path until God intervened in the form of a Ford pickup.

"That brought me right back to God. Some people need to be brought to their knees to come back, and I needed it," he said.

"For a lot of people it might have brought them away, but it brought me down to my knees worshipping," Nicole said of her accident and recovery.

"I feel one of the reasons we’re so good is to get out and talk to people and tell them of God’s miracles," Brenden said.