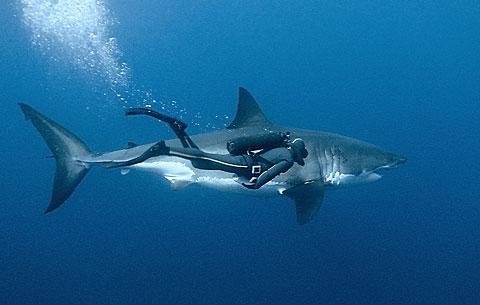 Shot over a four-year period, the marine documentary has a poetic, meditative quality that ultimately echoes even more resoundingly than its portrayal of the awesome power and tumultuous wonders of the sea.
The best nature films present spectacular pictures, tell a dramatic story (which usually entails a high degree of anthropomorphizing) and impart facts. Co-directors and writers Jacques Perrin and Jacques Cluzaud, who previously collaborated on the Academy Award-nominated "Winged Migration," don’t skimp on arresting images but have difficulty piecing together a cohesive narrative.

And because they decline to transmit much data, at times the viewer is left wanting more explanatory detail. (Why exactly are those thousands of spider crabs attacking one another in Melbourne Bay?)

Their stated goal is to provide an emotional experience that will heighten viewer sensitivity to the aquatic ecosystem. Although they touch on a handful of ways in which the human race threatens the oceans (seeing fish caught in commercial nets is particularly poignant), their philosophical approach sees mankind as the potential hero of the piece, not merely its villain. Messieurs Perrin and Cluzaud are hopeful, accurately contending that our collective will to protect the ocean has never been stronger.

They begin by posing the question "What is the sea?" and end by claiming that to understand the ocean is to put a mirror up to ourselves. The journey of communal self-examination they lead spans all five oceans, submerging viewers into the waters off the Galapagos Islands, Costa Rica, South Africa and the Antarctic (to name only four shooting locales) in loosely connected sequences featuring myriad sea creatures, both familiar and exotic.]

Highlights include a thrilling segment during which hosts of marine birds, sharks and whales simultaneously feast on schools of sardines; a suspenseful nighttime visit to the ocean floor; and dynamic footage of dolphins playfully cutting through the deep. Cooperation between different species is showcased as prominently as predation. And those needing their penguin fix won’t be disappointed.

Visually, "Oceans" scores high marks, and it’s a bit surprising that the movie isn’t being released in 3-D or on Imax screens. The 35mm digital cinematography is most remarkable for its ability to capture fast movement. Sonic phenomena — birdcalls, whale songs, plus the sounds of churning, storm-tossed waters — are as memorable as the film’s eye-catching splendors. They’re well matched by the pleasing tones of narrator Pierce Brosnan.

The message that conservation is in humankind’s self-interest and that we must endeavor to live in harmony with every denizen of the sea is unassailable.

In addition to refraining from eco-scaremongering, the filmmakers avoid disturbing images. When, for instance, killer whales and great white sharks are seen hunting sea lions and fur seals, or frigate birds pluck newly hatched turtles from the sand, they cut away before showing anything too graphic, and so the film contains nothing objectionable.
The USCCB Office for Film & Broadcasting classification is A-I — general patronage. The Motion Picture Association of America rating is G — general audiences. All ages admitted.

McCarthy is a guest reviewer for the U.S. Conference of Catholic Bishops’ Office for Film & Broadcasting. More reviews are available online at www.usccb.org/mov