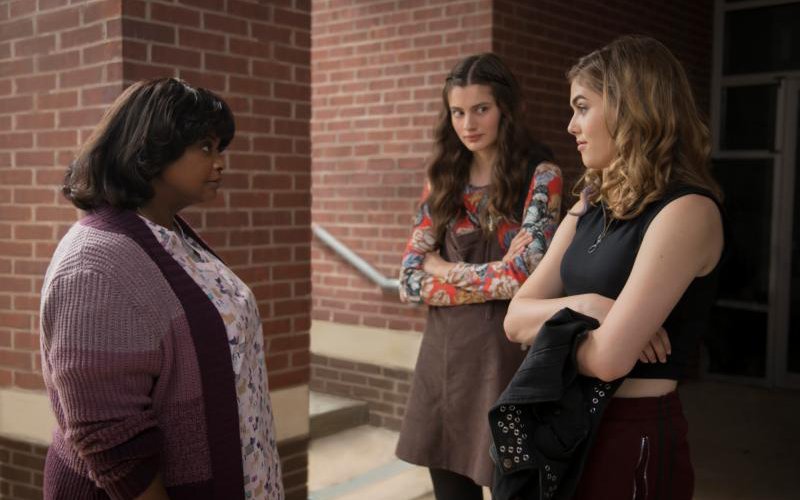 Octavia Spencer, Diana Silvers and McKaley Miller star in a scene from the movie "Ma." (CNS photo by Universal)

NEW YORK (CNS) — There are more laughs than chills to be garnered from the horror tale “Ma” (Universal). But the potential for campy fun in director Tate Taylor’s overheated film, penned by Scotty Landes, is undercut by its exploitative bloodletting, freewheeling sexual content and the pass it gives to adolescent boozing.

Soon after moving from California to the small Ohio town where her divorced mother (Juliette Lewis) grew up, new girl Maggie (Diana Silvers) is befriended by a group of her fellow high school students. The ensemble of pals — wild Haley (McKaley Miller), gentle Andy (Corey Fogelmanis), cheerful Chaz (Gianni Paolo) and smooth Darrell (Dante Brown) — like to party but are much too young to buy alcohol.

After unsuccessfully soliciting various adult passersby to purchase liquor for them, the amigos find an initially reluctant but eventually cooperative partner in veterinary assistant Sue Ann (Octavia Spencer). Ostensibly worried about what they might do once inebriated, however, Sue Ann invites the kids to follow her home and have a shindig in her basement.

As the young folk swill and Maggie and Andy start to crush on each other, Sue Ann, on whom Darrell bestows the nickname of the title, begins to display some rather erratic behavior. In what turns out to be her idea of a practical joke, for instance, she points a pistol at Chaz and orders him to strip naked.

Everyone eventually has a good laugh at that — not least Chaz, once he puts his clothes back on — and the festivities resume. But Ma’s dark side, which stems, at least in part, from a trauma she suffered during her own school days, continues to surface periodically. This doesn’t stop Maggie and her buddies, however, from turning Ma’s place into their favorite hangout.

Spencer is sufficiently gifted that the entertainment value of watching her character come unhinged helps the audience overlook the wild — and obvious — improbabilities by which the proceedings are beset. But the movie’s climax involves a graphically portrayed killing spree that, together with other problematic elements, makes “Ma” as off-the-charts morally as its protagonist is mental health-wise.