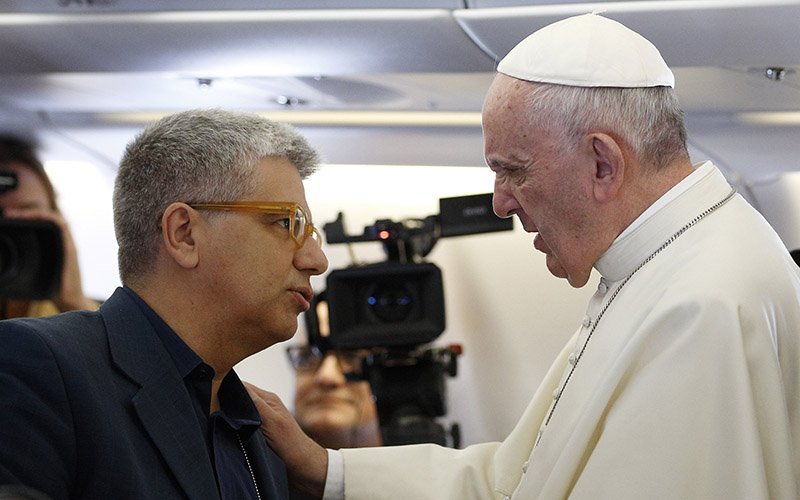 Pope Francis is pictured in a 2015 file photo speaking with Andrea Tornielli, editorial director for the Dicastery for Communication, aboard his flight from Rome to Havana. (CNS photo by Paul Haring)

VATICAN CITY (CNS) — Pope Francis’ encyclical on fraternity and social friendship will be released with an Italian title that will not be translated into different languages, reported Vatican News.

Much the same way the pope’s first encyclical, “Laudato Si’,” was released, not with a formal Latin title, but rather with an Italian phrase used by St. Francis of Assisi, the title of the pope’s third encyclical will be published as “Fratelli Tutti,” which is another phrase used by the medieval saint.

The Vatican has announced the encyclical will be published Oct. 4, the feast of St. Francis of Assisi.

In Italian, “fratelli” means “brothers” or “brothers and sisters” since, like with many Romance languages, the masculine form of nouns is traditionally used when referring to males and females collectively. “Tutti” means “all,” so the phrase could be translated as “Brothers and Sisters All,” even though it is being taken from St. Francis of Assisi’s “sixth admonition” to the friars, all of whom were men.

Andrea Tornielli, editorial director for the Dicastery for Communication, wrote “the formulation of the title in no way intends to exclude women, that is, more than half of the human race,” but is merely a direct quotation from the admonitions, and “the pope has obviously not changed it.”

The encyclical will address “the whole of humanity,” he wrote in an editorial published by Vatican News Sept.16.

Pope Francis chose the saint’s words “to initiate a reflection on something he cares about very deeply — namely, fraternity and social friendship. He therefore addresses all his sisters and brothers, all men and women who populate the earth — everyone, inclusively, and in no way exclusively,” Tornielli wrote.

The encyclical’s subtitle, “Fraternity and social friendship,” indicates what it is that unites men and women — a form of affection that is built up between people even if they are not relatives, he wrote.

“The relationship must be expressed through kind deeds, forms of assistance, works of justice and generous action in times of need,” regardless of people’s differences or affiliations, he added.

The encyclical, he said, is expected to focus on “our common belonging, which indeed makes us brothers and sisters.”

“For this reason, all readers should be able to understand the title ‘Fratelli Tutti’ with the absolutely inclusive connotation that is intended,” Tornielli said.

Pope Francis will travel to Assisi Oct. 3 to celebrate Mass at the tomb of St. Francis and to sign the encyclical.

Because of ongoing concerns and restrictions due to the COVID-19 pandemic, the Mass and the rest of the pope’s visit will be private, the Vatican press office said.

The encyclical is expected to echo many of the themes Pope Francis has been discussing in his general audience talks on Catholic social teaching in light of the pandemic: human fraternity, the equal dignity of all people, the preferential option for the poor, the universal destination of goods and the obligation of solidarity. Care for the environment and the virtue of peacemaking also are expected to be part of the encyclical.