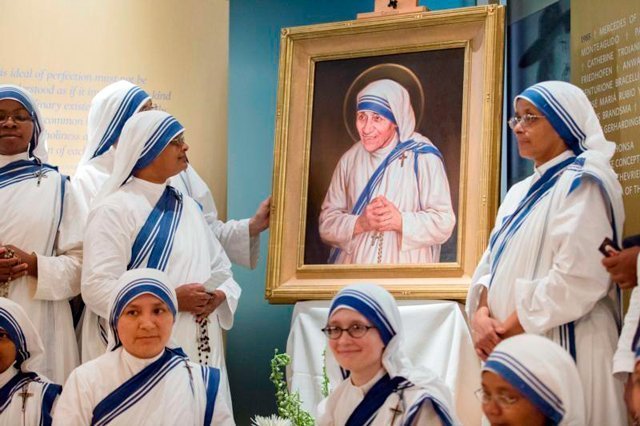 Sisters from the Missionaries of Charity admire the official canonization portrait of Blessed Teresa of Kolkata just after its unveiling Sept. 1 at the St. John Paul II National Shrine in Washington. The image will be displayed during her canonization at the Vatican Sept. 4.
By Mark Zimmermann
Catholic News Service
WASHINGTON (CNS) — On the eve of her canonization as a saint, Blessed Teresa of Kolkata, who famously disliked being photographed, was immortalized with the unveiling of a dramatic portrait at the St. John Paul II National Shrine.
Artist Chas Fagan, assisted by two members of Mother Teresa’s Missionaries of Charity congregation, unveiled his oil painting, "St. Teresa of Calcutta: Carrier of God’s Love," Sept. 1.
The painting was chosen as the official canonization portrait. It was commissioned by the Knights of Columbus.
A reproduction of the portrait was unfurled earlier the same day as a large tapestry on the facade of St. Peter’s Basilica at the Vatican. It was to serve as a backdrop for Pope Francis’ Sept. 4 canonization Mass for Mother Teresa.
In Washington the sight of the portrait drew excited gasps and lingering smiles from the 17 members of the Missionaries of Charity attending the ceremony.
"She’s our mother. Now she’s the mother of the whole world. She’s a saint for the church. She’s not just our own. We’ve given her to the world," said Sister Tanya, superior of the Gift of Peace home in Washington, where the Missionaries of Charity serve elderly, poor, sick and homeless people.
The Knights of Columbus printed more than 1 million prayer cards with the official portrait. They will be distributed at the canonization Mass and given to Missionaries of Charity and the people they serve around the world.
Fagan smiled and said artists dream of seeing a positive reaction to their work like the sisters offered, but that he thought "the credit lies more with the subject than the painting."
The artist said that he, like millions of people around the world, admired Mother Teresa for her loving service of the poor and her humility. Fagan, who has painted and sculpted portraits of U.S. presidents, said capturing the essence of the nun known around the world was a daunting task.
He explained that he found his "hook" with a simple quote of the saint-to-be that someone shared: "Joy is strength." He said the phrase helped him feel like he knew Mother Teresa and guided the composition and the expression that he painted on her face.
"Every time I lifted up the brush, that quote was going through my head. Mother Teresa lived that. She was a diminutive, yet earthshaking figure," the artist said.
Fagan said he spent about a month on preparatory sketches before beginning the portrait, which took about six weeks to complete. "Mother Teresa brought joy to my studio, to my home. Now I will miss her company," he said.
The painting shows Mother Teresa smiling warmly and looking to the side, with a subtle halo over her head. She is wearing her community’s trademark white sari-styled habit with blue trim. A member of the Missionaries of Charity serving in Charlotte, North Carolina, posed for the artist so he could capture the folds of their distinctive habit accurately.
The painting was to be displayed at the Knights of Columbus Museum in New Haven, Connecticut, for several weeks except for events in New York Sept. 8-9, and a Sept. 10 Mass of Thanksgiving at St. Patrick’s Cathedral celebrating the canonization. It eventually will be given to the Missionaries of Charity.
A second painting depicting Mother Teresa and St. John Paul II also was unveiled at the shrine Sept. 1.
The painting by Russian-born artist Igor Babailov, depicts St. John Paul II and Mother Teresa standing together in front of 22 young children of different races and cultural backgrounds. The girls are wearing white first Communion dresses and the boys also are in white. A toddler is similarly attired.
The pope offers a blessing and Mother Teresa’s hands are folded in prayer. The painting, donated to the shrine by the artist, is called "Credo," the Latin word meaning to believe and follow.
The unveiling followed a Mass of thanksgiving for the canonization of Mother Teresa celebrated by Archbishop Christophe Pierre, the apostolic nuncio to the United States, at the shrine’s Redemptor Hominis Church.
– – –
Zimmermann is editor of the Catholic Standard, newspaper of the Archdiocese of Washington.
Copyright © 2022 Catholic News Service, Inc. All rights reserved. Linking is encouraged, but republishing or redistributing, including by framing or similar means, without the publisher's prior written permission is prohibited.