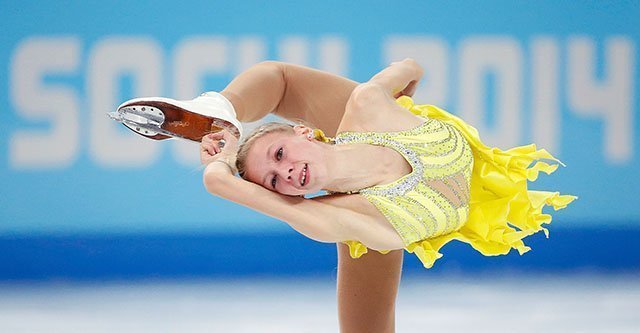 Polina Edmunds of the U.S. competes in the women's figure skating short program Feb. 19 during the 2014 Winter Olympics in Sochi, Russia. Edmunds, a sophomore at Archbishop Mitty Catholic High School in San Jose, Calif., made her senior national debut at the games, placing ninth overall in the free skating event.

WASHINGTON (CNS) — Polina Edmunds entered Archbishop Mitty High School the morning of Feb. 25 "with a big smile on her face" and a "cool" USA jacket — not one full day after her 23-hour flight home from Sochi, Russia.

"I think she just wanted to get back and be a 15-year-old kid again," Principal Tim Brosnan said of the Olympic figure skater in a telephone interview from San Jose, Calif., where the school is located.

Edmunds, who made her senior national debut at the 2014 Winter Olympics in Sochi, placed ninth overall in ladies free skating. However, the high school sophomore is not the only famous athlete to come from Mitty.

"It’s fun, to be honest," Brosnan told Catholic News Service about having such notable alumni. "It speaks to the level of achievement we hope kids aspire to."

Some of the graduates come back and visit the San Jose diocesan high school, Brosnan said, and are good role models for the students.

"(They show) you can be successful in any field," Brosnan said. "You don’t have to get bigheaded about it; you can still be humble."

Shortly after her role in the 2008 Beijing Olympics, Walsh Jennings donated a professional sand volleyball court to the school. She still stays connected with Mitty today.

"We had amazing athletes and great coaches," Walsh Jennings said of her time at Mitty. "It got better every year and it just hasn’t stopped."

MaxPreps, a website that follows all high school sports around the country and ranks the various teams, Mitty’s athletic program as the fourth best in the nation in 2009 and 2010.

Though known for its athletes, the school’s first and primary focus is to be a Catholic academic institution, said Brosnan. The athletics program has "just kind of evolved."

"We emphasize high expectations, and that certainly carries over to the gym," Brosnan said. "I think it’s just part of the culture of expectations."

Walsh Jennings said there’s a lot of pride in being a Mitty Monarch.

She noted a family aspect between the students and staff at the school. The love and support combined with the school’s Catholic values makes for a very positive environment, she said.

"Everyone in that school, Catholic or not, believes in something bigger than themselves," Walsh Jennings told CNS in a telephone interview from California. "They want to live a righteous life and work hard. … I think that’s the bottom line with that school."

Whereas Chastain and Walsh Jennings competed in the Olympics after their high school graduation, Edmunds competed during her sophomore year.

"That’s what was most remarkable," Brosnan said, that "somebody that young (is) able to be so successful and so focused."

Before Edmunds left for the games, Mitty held a send-off celebration for her. All 1,720 students attended, and Chastain and Walsh Jennings spoke to the student body.

At the event, Chastain said, "(The Olympics) is such a wonderful opportunity, not only for Polina and her family but for Mitty to celebrate greatness."

"Greatness is sitting right next to you," she told the student body. "What I love about Mitty is that the family supports your greatness."

During her speech, Chastain gave Edmunds a scarf and an Olympics soccer team pin from her first games in 1996, generating cheers and "awes" among the audience.

Walsh Jennings could see a little bit of herself in Edmunds, she said, since she too was an unassuming, shy girl whose sport brought out her confidence. Though Walsh Jennings didn’t have much one-on-one time with Edmunds, she meant every word in her speech.

"Every word was directed at Polina," she said. "My heart was with her and my words were to her."

At the end of the ceremony, students sang a Mitty theme song, "One Day" by Jewish reggae artist Matisyahu.

The skater was sure to support her school as well. She carried with her a lion stuffed animal, in honor of her school’s mascot. She also completed many of her homework assignments while she was away.

Of course it was pressure," Polina’s mother and trainer Nina Edmunds told CNS, "but she was trained for that."

Polina Edmunds’ experience in Sochi has motivated her to compete again in the 2018 Olympics in Pyeongchang, South Korea, NBC Bay Area reported.

As for now, she is trying to settle down from all the attention. The Tuesday she returned to school, media trucks were parked outside the building waiting for her. Brosnan said Mitty is trying to protect her from unnecessary press.

Rather than throwing a vast homecoming party, Brosnan congratulated Edmunds both personally and on the announcements. Edmunds’ classmates welcomed her with hugs.

"It’s a tough spot to be in — going from nobody knowing who you are to becoming world famous," Brosnan said. "(But) she’s very grounded. … I’m not worried about her."