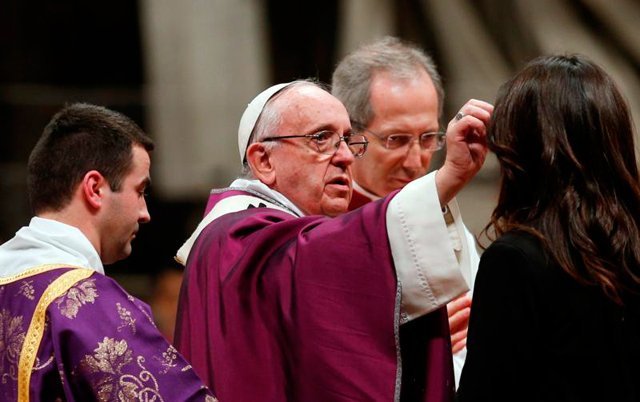 Pope Francis gives ashes to a woman as he celebrates Ash Wednesday Mass in St. Peter's Basilica at the Vatican Feb. 10.
By Carol Glatz
Catholic News Service
VATICAN CITY (CNS) — Pope Francis marked the beginning of the church’s Lenten journey by sending off several hundred religious and diocesan priests on their own special path as "missionaries of mercy" in local parishes.
"Look upon your servants, Lord, that we are sending as messengers of mercy, salvation and peace. Guide their steps" and sustain them with "the power of your grace," the pope said during a special Ash Wednesday liturgy in St. Peter’s Basilica Feb. 10.
"May Christ’s voice resound in their words and Christ’s heart in their gestures," he said.
More than 700 of the 1,142 missionaries specially appointed by the pope attended the Mass. Dressed in white vestments and purple stoles, the men received the pope’s mandate to preach about God’s mercy and special authority to pardon even those sins reserved to the Holy See.
Their mission was echoed in the day’s second reading from St. Paul’s Second Letter to the Corinthians, in which he proclaims, "We are ambassadors for Christ" with God working and speaking through them, imploring people to "be reconciled with God."
In his homily before commissioning the priests at the end of Mass, the pope said their mandate is to be "signs and instruments of God’s pardon."
"Dear brothers, may you be able to help open the doors of people’s hearts" as well as bless, heal and raise them up" with a father’s love, he said.
God knows the sins, weakness, wounds and fatigue people experience in their lives and "he knows how much we need forgiveness, he knows that we need to feel loved in order to carry out the good," he said.
People cannot keep going on their own, and that is why the apostle Paul doesn’t urge people to "do something, but to let themselves be reconciled by God, to allow him to forgive us," he said.
In fact, the first step on the road of a Christian life is recognizing the need for divine mercy and to pass through that "open door which is Christ," who offers everyone a new and joyful life.
The problem, the pope said, is there may be many barriers that keep people from ever approaching or opening that door.
People may be so hardened by sin or pride that "they bolt the lock on the soul," justifying their errors or believing they are "no worse than others," thereby remaining "prisoners of evil."
Another obstacle people face is being ashamed "to open the secret door of the heart." While shame is a good sign since "it shows that we want to detach ourselves from evil," it must never turn into "dread or fear."
The third danger is when people walk away from Christ, becoming distant or isolated by holing themselves up with their own suffering, wallowing endlessly in negative thoughts and sinking into the darkest recesses of the soul, he said.
"Let’s listen to Jesus, who says to those who are weary and burdened, ‘Come to me,’" since "only the Lord’s grace liberates us" and offers peace and rest, the pope said.
He said the Lord asks people to close the distance that has grown and "return to me with your whole heart."
The Lenten journey invites people to "be protagonists, embracing three remedies, three medicines that heal (people) from sin" — prayer, fasting and almsgiving.
"May Lent be a time of a healthy ‘pruning’ back of falsehood, worldliness, indifference; of no longer thinking that everything is fine as long as I am doing well; of understanding that what matters isn’t acceptance, seeking success or approval, but the cleansing of one’s heart and life."
The pope broke with the tradition of walking from the Benedictine monastery of St. Anselm to the Dominican-run Basilica of Santa Sabina in order to commission the missionaries of mercy from St. Peter’s Basilica. Before the main altar were the mortal remains of St. Padre Pio and St. Leopold Mandic, two Capuchins popular as miracle workers and known particularly for the long hours they would spend hearing confessions.
Pope Francis had asked the Capuchins to bring the relics of the two saints to Rome for the Year of Mercy, particularly the celebration of Ash Wednesday and the commissioning of the official missionaries of mercy as an encouragement and inspiration to be generous with God’s love.
The pope received ashes on the top of his head from Cardinal Angelo Comastri, archpriest of St. Peter’s, and distributed ashes to a number of cardinals and a small group of laypeople and religious.
Copyright © 2023 Catholic News Service, Inc. All rights reserved. Linking is encouraged, but republishing or redistributing, including by framing or similar means, without the publisher's prior written permission is prohibited.