On Assumption feast, pope asks consolation for all who suffer - Catholic Courier 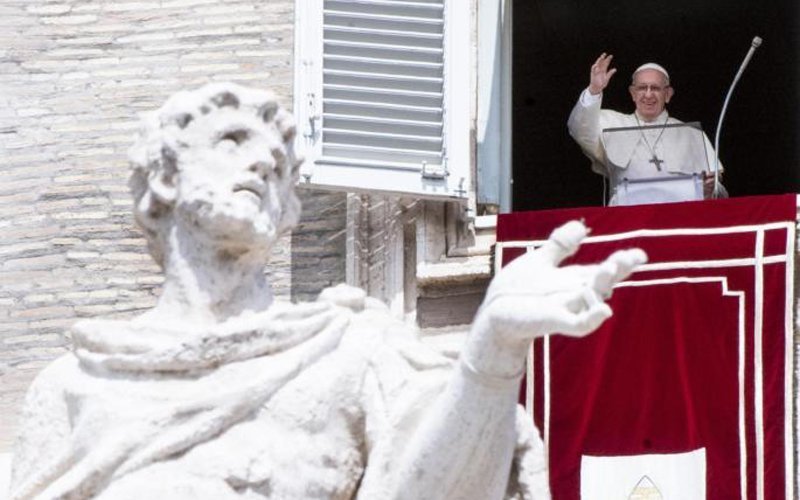 Pope Francis waves as he leads the Angelus from the window of his studio overlooking St. Peter's Square at the Vatican Aug. 15, the feast of the Assumption. (CNS photo by Claudio Peri/EPA)

VATICAN CITY (CNS) — Mary’s assumption into heaven was a special sign of God’s favor, but it also indicates God’s desire to save all people, body and soul, Pope Francis said.

Reciting the Angelus prayer on the feast of the Assumption Aug. 15, Pope Francis also asked the crowd in St. Peter’s Square to join him in praying for the 38 people who died Aug. 14 when a large span of a highway bridge collapsed in Genoa, Italy.

But he also prayed for all people who are suffering around the world. “To Mary, consoler of the afflicted, who we contemplate today in the glory of heaven, I want to entrust the anguish and torment of those who, in many parts of the world, suffer in body and spirit.”

“Let us pray that Mary, with her maternal intercession, will help us live our daily journey in the sure hope of joining her one day with all the saints and our loved ones in heaven,” the pope said.

The assumption of Mary, body and soul, into heaven was a “divine privilege” given to her because of her close union with Jesus from the very beginning, the pope said. “It was a corporal and spiritual union that began at the Annunciation and matured throughout Mary’s life,” leading finally to the foot of the cross.

While Mary was given a special grace, the pope said, the feast day should remind Catholics that the church professes faith in “the resurrection of the body” for all who are saved by Christ.

“The stupendous assumption of Mary manifests and confirms the unity of the human person and reminds us that we are called to serve and glorify God with our whole being, body and soul,” he said. “Serving God only with our body would be the action of a slave; serving God only with the soul would be contrary to our human nature.”