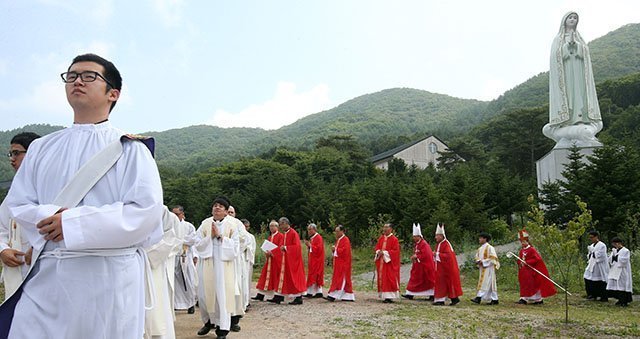 MANILA, Philippines (CNS) — Maryknoll Sister Jean Maloney first arrived in South Korea to work as a nurse after the Korean War ended more than 50 years ago.

Sister Jean, 84, described herself in those days as "a young sister full of vitality" who thought she was bringing the Christian faith so she could tell everyone about God.

"I have been so enriched in my faith … by coming here and living with the people," she told Catholic News Service. "It’s been such a richness for me, that I just feel I received more than I’ve ever given."

Sister Jean’s ministry symbolizes the strong bonds that have been built over the decades between Americans and South Koreans.

As South Koreans prepare for Pope Francis’ Aug. 14-18 visit, several Americans spoke to CNS about living their faith in the country.

When South Korea began rebuilding after the war, Sister Jean, a native of Syracuse, N.Y., started working with women laborers and then got involved in helping women living on society’s margins. In 1985 she and other Maryknoll Sisters helped found Magdalena House, which offers shelter and social services to women trafficked for sex or who were abused or raped. After 15 years the sisters turned over the agency to a lay group.

"This was the first work of its kind because many of the women had been working in prostitution," she said. "As word about the work spread, many Catholic groups also took up the work of sheltering women and helping them to get education, to lead a better life, that kind of thing."

Sister Jean said these days the sisters visit Magdalena House once a month, but they remain involved in other ministries. She continues to teach English to Catholic and non-Catholic Koreans through Bible study.

Teaching English was what brought Ai Doan, 23, to South Korea last September. The Vietnamese-American was born and raised in Fort Smith, Ark.

Doan said she went to English-language Mass at an international church. But after feeling homesick she decided to join a Catholic young adult group called Unitas Korea, where she immediately felt welcome and eventually joined the welcome committee.

"They would come in from all over the place, from Singapore or from Hong Kong," Doan told CNS. "Some of them are curious about the Catholic Church. Some weren’t even Christian. … My position was to welcome them, answer their questions and cater to their needs. As I helped them with their faith, my faith also became stronger, too."

Issac Kwon and his brother started Unitas Korea, a carryover from their college days in Boston. Kwon, 25, a Korean-American from the East Coast, told CNS that attending Mass in South Korea involved an adjustment on his part because he found the Korean liturgy "more rigid" than Mass in the U.S. Even so, he said, he was grateful for the international Masses that members of the group attended.

Kwon is an architect in Seoul for a company that designs Catholic structures. He also is a volunteer international liaison for the Asian Youth Day, Aug. 13-17.

"You’re completely surrounded by conflicting information all the time," he said. "And if you’re not somebody who is proactive or is maybe not assertive in searching out deeply in your faith and reflecting on your own values as a Catholic, then it’s very easy to get lost, I think, in the modern world."

The church "holds a place of respect in Korea," she told CNS.

Sister Dolores, 75, laughed when she described riding the bus from time to time where curious strangers struck up conversations asking about her marital status. When they learned belonged to a religious order, they told her what Catholic or Protestant churches they belonged to while the non-Christians "were just happy" to talk.

Sister Dolores recalled riding a bus two years ago, when the Maryknoll order was celebrating its 100th anniversary, and looking at photos of the sisters’ work in South Korea. A woman looking over her shoulder started to cry.

"She thanked me for the lives of ‘those women,’" Sister Dolores said. "She wasn’t Catholic, she was a Christian though and she said, ‘Those women came to our country when we were so poor and they began schools and hospitals and social services, and they’ve helped us become what we are.’"