On eve of Trump inauguration, Catholic communities will pray for immigrants - Catholic Courier 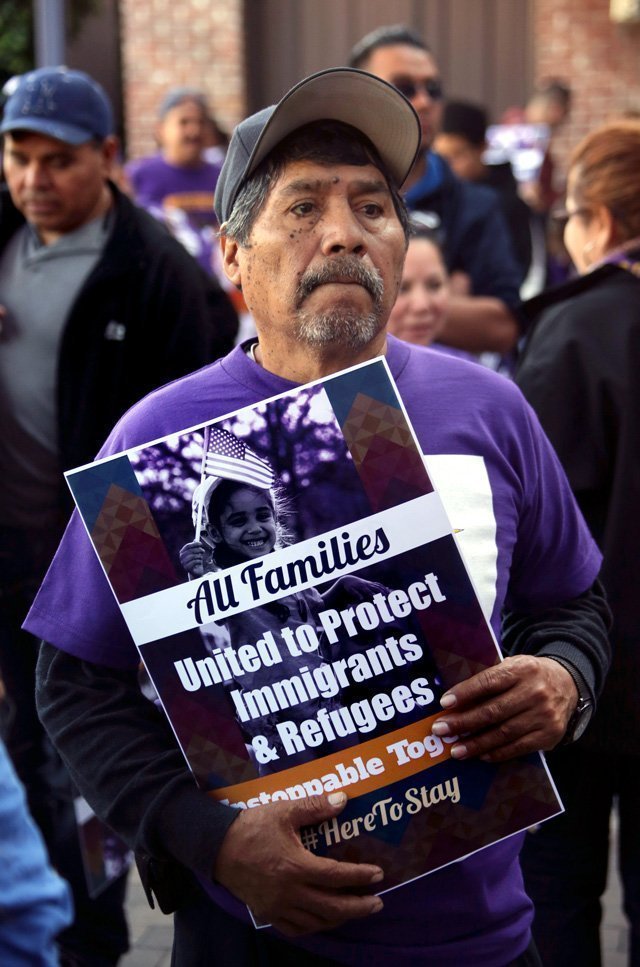 A protester holds a sign that reads "United to Protect Immigrants & Refugees" as he joins hundreds of others Jan. 14 in a rally for immigrant rights and against President-elect Donald Trump in Los Angeles. On the eve of Trump's Jan. 20 inauguration, Jesuit parishes, schools and other communities planned to pray for immigrants and others who fear Trump's proposals.

WASHINGTON (CNS) — Acknowledging the fear some immigrants have expressed as Donald Trump becomes president, Jesuit parishes, schools and other communities plan to pray for those who fear him and his proposals on the eve of his Jan. 20 inauguration as the country’s 45th president.

At least one community said it will declare sanctuary status for itself that evening.

The Ignatian Solidarity Network, a social justice education and advocacy organization based in University Heights, Ohio, said in a news release that it asked its partner universities, high schools and parishes to organize events "recognizing the experiences of marginalization that immigrant members of communities throughout the country are experiencing."

The result is the event titled "Prayers of Light: A Call to Prayer for Immigrants," taking place from coast to coast Jan. 19 in venues from San Francisco to New Jersey in places large and small in between, such as De Pere, Wisconsin, and St. Louis. Some planned prayer services with candles, Stations of the Cross with stories by immigrants, vigils and calls to political action.

"We offer these symbols of light as signs of solidarity for those who may be forced into the shadows of our nation," said Christopher Kerr, executive director of the Ignatian Solidarity Network. "Through action and solidarity, we hope to illuminate the dignity of our immigrant brothers and sisters, and the value of each individual’s contribution to this country."

In the case of a person who does not have legal status to be in the country, a sanctuary site could theoretically shield that person from federal authorities. Ever since Trump won the election in November, several cities and organizations around the country have explored offering sanctuary status for those fearing deportation. During his campaign, Trump vowed to carry out mass deportations and said he would form deportation forces if he became president. However, after winning the presidency, he said he wasn’t planning on it.

In places like Texas, Republicans are exploring legally prohibiting the idea of offering sanctuary in a city or a site, and are trying to pass bills against offering sanctuary. Some of the organizations taking part in the "Prayers of Light" event will set up phone banks to call elected representatives and ask them to oppose legislation that would punish or ban sanctuary sites.

In the 1980s, Catholic churches were part of the sanctuary movement that offered protection, shelter and other necessities to immigrants from Central America seeking refuge in the country, sometimes without legal documentation, as they fled civil conflicts in their home countries.