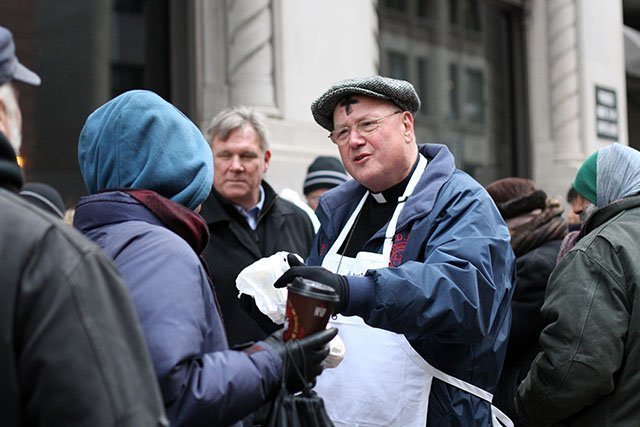 Cardinal Timothy M. Dolan of New York helps distribute food to people waiting in the St. Francis Breadline outside St. Francis of Assisi Church in New York on Ash Wednesday March 5. The church operates the longest continuously running breadline in the nation. It was founded in 1930 by Franciscan Brother Gabriel Mehler to feed people impoverished by the Great Depression.

VATICAN CITY (CNS) — Pope Francis criticized those who practice fasting as a mere ritual, rather than as a sacrifice representative of a religion of love.

The pope made his remarks March 7, the first Friday of Lent, in his homily at morning Mass in the Vatican guesthouse, where he lives.

"These hypocritical people are good persons," he said, referring to the Pharisees who criticized Jesus and his followers for not fasting as required by Jewish law. "They do all they should do. They seem good. But they are ethicists without goodness because they have lost the sense of belonging to a people."

True fasting entails sharing goods with the needy, Pope Francis said, according to a report by Vatican Radio.

"This is the charity or fasting that our Lord wants," he said. "This is the mystery of the body and blood of Christ. It means sharing our bread with the hungry, taking care of the sick, the elderly, those who can’t give us anything in return: This is not being ashamed of the flesh."

The pope called on Christians to follow the example of the good Samaritan, drawing close to the beneficiaries of their charity in an act of true fraternity.

"When I give alms, do I look into the eyes of my brother, my sister?" he asked. "Am I capable of giving a caress or a hug to the sick, the elderly, the children, or have I lost sight of the meaning of a caress?

"These hypocrites were unable to give a caress," the pope said. "We will be judged by the way we behave toward this brother, this sister."