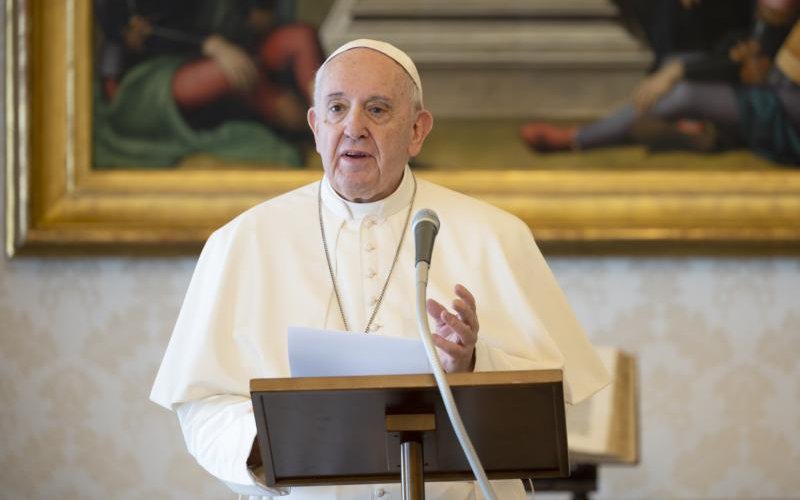 Pope Francis leads the recitation of the "Regina Coeli" from the library of the Apostolic Palace at the Vatican May 3, 2020. (CNS photo by Vatican Media)

VATICAN CITY (CNS) — Priests and doctors who gave their lives caring for the spiritual and physical well-being of others during the coronavirus pandemic are like Jesus, the good shepherd, who laid down his life for his flock, Pope Francis said.

Celebrating Mass on Good Shepherd Sunday, May 3, the pope said the feast reminded him of the more than 100 priests and 154 doctors who have died in Italy “in an act of service” to victims of COVID-19.

“May the example of these ‘shepherd-priests and shepherd-doctors’ help us to take care of God’s faithful holy people,” he said.

The pope began his homily by reflecting on the Sunday Gospel reading from St. John, in which Christ not only presents himself as the shepherd but also as “the gate for the sheep” because “whoever enters through me will be saved.”

“All who came before me are thieves and robbers, but the sheep did not listen to them. I am the gate,” Jesus said.

The pope noted that even the church has not been immune to “fake shepherds” who throughout history “exploited the flock” and were interested only “in making a career, in politics or in money.”

Nevertheless, “the flock knows how to distinguish between shepherds, they are not mistaken,” he said. “The flock trusts the good shepherd, they trust Jesus. The flock only trusts a shepherd who looks like Jesus.”

A shepherd who isn’t meek, he added, “has something hidden because meekness shows itself as it is, without defending itself.” A meek shepherd is guided by “that tenderness of closeness” that spurs him on to go out of his way in search of the lost sheep.

Later in the day, before reciting the “Regina Coeli” prayer, the pope said that just as a flock of sheep can recognize the voice of their shepherd, Christians must learn to distinguish between “the voice of the Good Shepherd and that of the thief.”

“The voice of God never forces,” he said in the address, which was livestreamed from the library of the Apostolic Palace. “God proposes, he does not impose. On the other hand, the evil voice seduces, assails, forces; it arouses dazzling illusions, tempting emotions, but it is fleeting.”

While the voice of evil uses flattery, he added, it “leaves us empty inside and accuses us.” Instead, the voice of God corrects with patience and “always nourishes hope.”

“In this time, so many thoughts and worries lead us to fall into ourselves,” the pope said. “Let us pay attention to the voices that reach our hearts. Let us ask ourselves where they come from. Let us ask for the grace to recognize and follow the voice of the Good Shepherd, who brings us out of the confines of selfishness and leads us to the pastures of true freedom.”

Recalling the church’s celebration of the World Day of Prayer for Vocations, the pope called on Christians “to pray to the father to send laborers to work in his field.”

“Priesthood and the consecrated life require courage and perseverance,” he said. “Without prayer, we cannot go forward on this path. I invite everyone to invoke from the Lord the gift of good workers for his kingdom, with hearts and hands open to his love.”