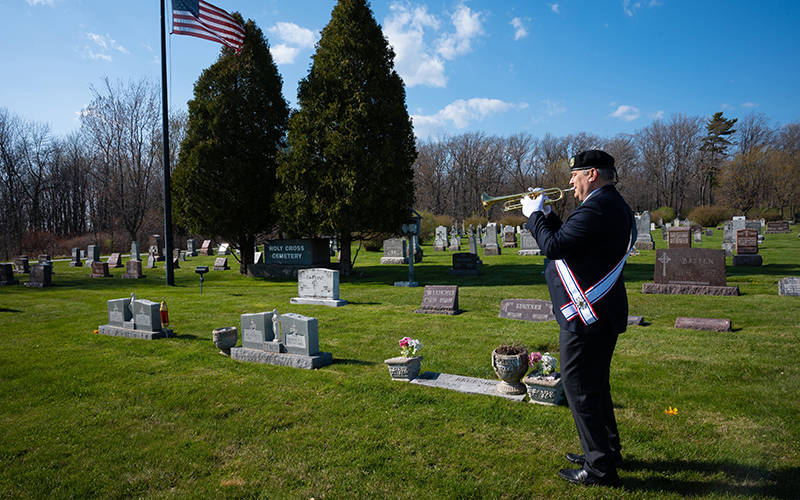 Bob Tuszynski, a fourth-degree Knight of Columbus, performs “Taps” on his trumpet at Holy Cross Cemetery in Bay Settlement, Wis., April 22, 2021. Tuszynski began the practice on Memorial Day last year and has continued to play nearly every day. By Memorial Day, May 31, he will have performed “Taps” 1,000 times, he said. (CNS photo by Sam Lucero/The Compass)

BAY SETTLEMENT, Wis. (CNS) — When Bob Tuszynski heard about a request in May 2020 for buglers and trumpeters to perform “Taps” at 3 p.m. on Memorial Day, he jumped at the opportunity.

“At that time, I had not touched my trumpet in four to six months and not practiced in earnest in almost four years,” he told The Compass, newspaper of the Diocese of Green Bay, Wisconsin. “I dressed up and went to Royal Scot (golf club) and failed miserably.”

The “Taps Across America” initiative was promoted by CBS News “On the Road” correspondent Steve Hartman to honor veterans. In a year when a worldwide pandemic halted picnics, parades and memorial services around the country for veterans, it was something Tuszynski said he needed to do.

“I was a little bit embarrassed, but I also thought about it from the perspective of my father, my uncles and relatives who had fought to save our country and actually keep it free,” he said. It’s also one of the reasons he’s continued what has now become his daily tradition.

Tuszynski wears his fourth-degree Knights of Columbus uniform when he plays for special occasions, like holidays. “Even though I didn’t serve (in the Armed Forces), I am part of the Knights of Columbus and our fourth degree is about patriotism,” he said. “So to honor them, I started to play every day.”

When President Joe Biden announced last January that he would reverse a Trump-era policy that barred federal Title X family planning funding to entities that perform and refer for abortions, like Planned Parenthood, Tuszynski said, he added this intention to playing “Taps.”

“The fact that one of God’s children is taken away” through abortion prompted him to also do “Taps” to “honor the unborn,” he said. “So those are the things that run through my mind when I’m playing.”

In addition to “Taps,” Tuszynski said he adds a verse from another song afterward. “Amazing Grace,” “What a Wonderful World” and “Let There Be Peace on Earth” are some of the songs he’s played.

The reaction from area residents has been mostly positive, he said.

“I know some people have heard it. I’ve gotten thank-you’s from some people, but I truly don’t do it for (recognition),” he said. “I do it to honor those” who have served their country. “The neighbors from Holy Cross Cemetery, they come out and I wave at them. They come out, listen and stand at attention.”

Tuszynski grew up in Milwaukee, where he began playing the trumpet around sixth grade.

“I always liked music, so I played it probably through high school,” he said. “My first musical instrument was percussion drums. I continued to play at church and at weddings, then I went to college and focused on athletics.”

Tuszynski attended Carthage College in Kenosha, Wisconsin, where he played football and ran track. He graduated with a degree in business administration/accounting in 1981.

He also met his wife, Tanya, at Carthage and they were married in 1982. They have five adult children: Jason, Rachel, Kelly, Louis and Machelle.

In addition to playing the trumpet, Tuszynski’s musical background includes singing in the Dudley Birder Chorale and cantoring at Holy Cross Church. “I’ve cantored at the diocese and sung in the diocesan choir,” he said.

As a manager of financial advisers for Thrivent financial services in Appleton, Wisconsin, Tuszynski has been working from home during the pandemic. He’s not sure when he will return to his office or how that will change his trumpeting schedule. However, he does plan to continue the practice as long as possible.

“I plan to keep playing at least until Nov. 9,” the 100th anniversary of the dedication of the Tomb of the Unknown Soldier in Arlington National Cemetery in Virginia, he said. “But I may continue after that.”

He also intends to join other trumpeters around the country for the second “Taps Across America” on Memorial Day, May 31.

“I think it’s somewhere around 960,” he said in estimating the number of times he’s played “Taps” in the last year. “So by Memorial Day of this year, it will be over 1,000 times playing.”

Lucero is editor of The Compass, newspaper of the Diocese of Green Bay, Wisconsin.