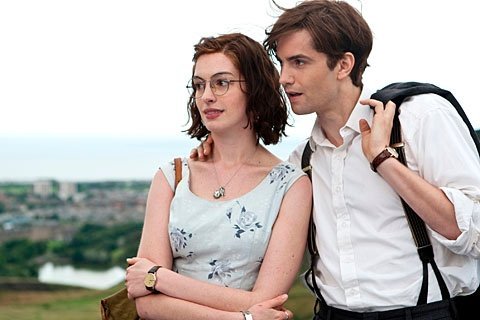 NEW YORK (CNS) — The ineluctable charms of its source novel are sadly missing in "One Day" (Focus), a turgid adult romance about the contrasting lives of two British soul mates as traced over the course of nearly 20 years.

The appeal is supposed to be that the relationship bracketing prim Emma Morley (Anne Hathaway) and rapacious Dexter Mayhew (Jim Sturgess) is emotional and intellectual, but never quite sexual. In other words, it’s mature and broadly, if not always straightforwardly, moral.

However, as played by the two stars — working with a screenplay adapted from his own novel by David Nicholls and under the plodding direction of Lone Scherfig — Dexter registers as impossibly whiny and immature while Emma’s avoidance of sex appears to be less a sound moral choice than the result of some sort of pathological prudishness.

A ninth-century bishop of Winchester, England, St. Swithin is renowned not only for his good works, but for a weather tradition similar to Groundhog Day. To wit, if it rains on the feast of St. Swithin, it’s supposed to continue doing so for nearly all of the 40 days that follow.

The vignettes begin with Emma and Dexter celebrating their graduation from college. They drunkenly initiate a bedroom encounter, but the sexual heat quickly dissipates in favor of cuddling, and they resolve to remain good friends.

Over the ensuing decades, handsome and charming Dexter sees quick success as a boorish TV host audiences love to hate, while Emma struggles as a waitress before becoming a teacher and a successful writer of children’s books. As his career spirals into a morass of booze, drugs and failure, the more disciplined Emma achieves her dreams.

Dexter enters a loveless marriage and has a daughter; Emma finds herself in a stale relationship with a live-in boyfriend before becoming engaged to a French jazz musician. Yet the duo still keeps in constant touch. Though they hug during their annual get-together, Emma constantly spurns Dexter’s occasionally crude advances.

Well before the five-hanky ending toward which all this is building, viewers’ interest is likely to have been fatally depleted by the excessively wordy dialogue of Nicholls’ verbose script.

The film contains a shadowy glimpse of female frontal nudity, brief rear nudity, implied cohabitation and a single instance of rough language. The Catholic News Service classification is A-III — adults. The Motion Picture Association of America rating is PG-13 — parents strongly cautioned. Some material may be inappropriate for children under 13.