One Direction: This Is Us - Catholic Courier 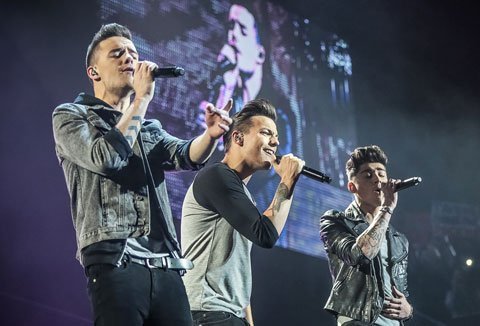 NEW YORK (CNS) — While grumpy grammarians may grumble over its title, the parents of targeted teenyboppers will find little to object to in the mostly harmless concert film "One Direction: This Is Us" (TriStar).

Director Morgan Spurlock showcases the boy band of the title — made up of Niall Horan, Zayn Malik, Liam Payne, Harry Styles and Louis Tomlinson — capturing a number of their upbeat stage performances during a recent world tour. He also chronicles the group’s creation by talent judge and pop impresario Simon Cowell.

Besides the good-natured horseplay going on backstage, viewers are also shown more serious aspects of the lads’ lives, including their work for charity and strong emotional bonds with their families. We see them interacting with some of the African children who have benefitted from their philanthropy, and witness one performer’s mother and sisters getting their first glimpse of the new, far more comfortable home he has purchased for them.

Irish-born Horan returns to his native Mullingar to participate in a (presumably Catholic) wedding ceremony. Some of the interview footage with him is filmed in the church where this event took place, suggesting it’s a structure to which he feels at least some connection.

As for the inordinate number of shots showing the youthful stars either shirtless or in their underwear, they hint that all that screaming from overwrought fans isn’t just about the music.

The film contains one use of profanity, brief scatological humor and a half-dozen mildly crass terms. The Catholic News Service classification is A-II — adults and adolescents. The Motion Picture Association of America rating is PG — parental guidance suggested.