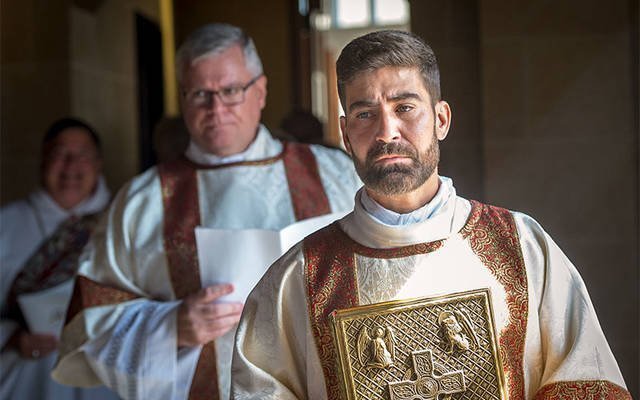 With a bachelor’s degree in biology under his belt a few years back, Deacon Jeff Chichester was working as a nature preserver and furthering his career with graduate studies in terrestrial ecology.

But deep inside, he sensed that something wasn’t quite right.

“I was doing something I really loved, but had never included God in those plans,” he said. “Then one day I was praying, ‘God is this your will?’ The funny thing was, I started to get ideas about the priesthood. It just wouldn’t go away, just this idea of, could I be a priest, is God calling me to this? I kind of had to discern whether or not this was something that was real.”

Where he is, following several years of preparation, is the brink of diocesan priesthood. Deacon Chichester, 43, is set to be the only priest ordained by Bishop Salvatore R. Matano this year. The ordination will take place during a 10 a.m. liturgy Saturday, June 2, at Sacred Heart Cathedral, 296 Flower City Park, Rochester.

Born in the small town of Hampton, N.J., Deacon Chichester graduated in 1994 from Easton High School in Easton, Pa. He then moved with his family to Mount Morris, Livingston County, where he became a member of St. Luke the Evangelist Parish. He earned his biology degree in 2006 from SUNY Geneseo, and then worked from 2006-10 at Beaver Meadows Audubon Center in North Java, Wyoming County.

Prior to that pivotal prayer experience, Deacon Chichester had mildly considered the priesthood from the time he was a young altar server. In the ensuing years, he was occasionally told that he’d make a good priest but “I never really did think about it too much because I was interested in other things, although that was nice to hear, a nice compliment,” he said.

Finally, in his mid-30s, Deacon Chichester was ready to fully embrace his priestly call. In 2011 he entered Becket Hall, the diocesan pre-theology program and, one year later, began seminary studies at the Pontifical North American College in Rome. In the fall of 2013 he started at Theological College in Washington, D.C., where he is currently finishing up his final year of seminary. He served at St. Mary and Ss. Mary and Martha parishes in Auburn during his pastoral year in 2015-16, and was ordained a transitional deacon by Bishop Matano in May of 2017.

Deacon Chichester noted that he’s looking forward to the variety of roles awaiting him in priesthood.

“One of the things I like about it is that it’s never the same. It changes every day, every hour,” he remarked. “You can go from a Bible study, to teaching CCD or RCIA, to visiting someone who is sick, to helping a couple prepare for marriage — and then right after that, go to a finance meeting. The day is so different and exciting.”

He added that he’s eager to celebrate Mass as well as administer a variety of sacraments, noting “how many poignant moments a priest is involved with in people’s lives. Being with people in those really important moments — that you can share that with them is such a wonderful privilege. It’s just such an honor to be able to serve.”

For his first priestly assignment, Deacon Chichester will serve as parochial vicar of St. Joseph and Holy Spirit parishes in Penfield. He said he relishes the opportunity to be a parish priest.

“You know, I think there’s something extraordinary about the parish, a profound holiness — so many people who give so much of their lives to the life of the church,” he said. “To me, that is witnessing the body of Christ.”

Deacon Chichester plans to celebrate his first Mass at his home church, St. Patrick in Mount Morris, on June 3 at 10 a.m. — one day after ordination, which is now only a few weeks away.

“The closer I get, the more gratitude I feel,” he said. “I feel grateful for all of the people and the prayers that sustained me through this. It takes a long time and is not always easy.”

He will be in the spotlight come early June, yet Deacon Chichester said he’s approaching his ordination — as well as his priestly duties that lie ahead — with a deep sense of humility.

“This (priesthood) is a profound thing I’ll be doing. I still think, ‘Me? Are you sure, God, just little old me?’” he said, laughing.