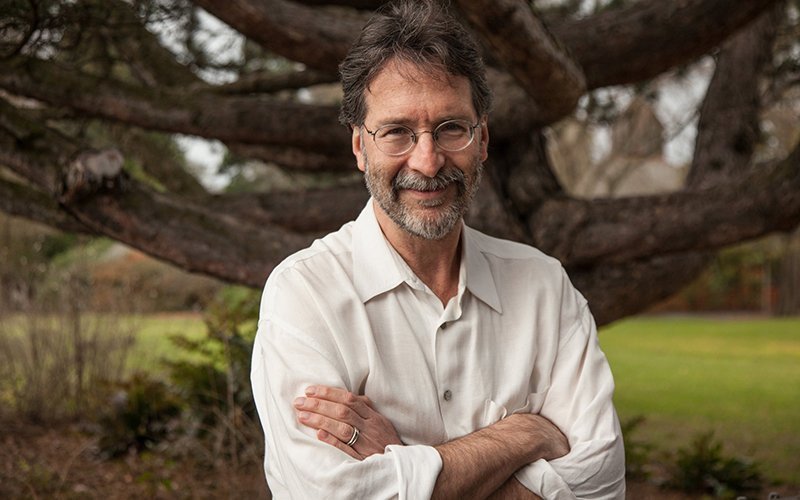 The late Brian Doyle, award-winning author and editor of the University of Portland's magazine, is pictured in a 2012 photo. (CNS photo by Tim LaBarge)

The year we all became birdwatchers: Writer Brian Doyle finds God in the birds

“Sometimes we are starving to see every bit of what is right in front of us,” Brian Doyle wrote in a prose-poem that appears in a collection of his writings titled “One Long River of Song.” The book includes many essays and prose-poems by Doyle, who died at age 60 in May 2017 due to complications of brain cancer.

I recall Doyle as someone pervaded by a “sacramental sense.” This is a sense that prompts people to recognize all of what is right in front of them.

Pope Francis spoke of this sense in “The Light of Faith,” his first encyclical. He suggested that for anyone gifted with a sacramental sense, “visible and material realities are seen to point beyond themselves to the mystery of the eternal.”

Doyle was a writer and a Catholic, someone who prayed everywhere and anywhere, it seems. I remember him well as the longtime editor of Portland magazine, published by the University of Portland, a Catholic institution in Oregon.

Typically he contributed an introductory essay to the editions of that publication. One essay, titled “Laces” (Winter, 2016), offers evidence of his sacramental sense. “I saw a tiny, not tiny moment which I find, weeks and weeks later, unforgettable,” he wrote. He asked:

“Why is it that the slightest things are the ones we remember best in the end?”

The tiny moment he mentioned involved a father “kneeling on the sideline” during a basketball practice for “very small boys.” The father was “retying his son’s shoelaces,” bent over “like he was praying.”

Doyle wondered (hoped?) that the boy “just for an instant” looked at his father “and got a jolt of something” that the writer said he could not find “the right word for …, something bigger than us, something the boy, if he was lucky, would someday feel the other way around too.”

God is “everywhere available,” Doyle once wrote. “Everyone babbles about God,” he said, but he had seen God that very morning, “just as the (school) bus slowed down for the stop at Maple Street.” God, he explained, “was six girls and one boy with a bright green and purple stegosaurus hat.”

Another day Doyle chatted briefly with God at the post office. “God was manning the counter from one to five” in the presence of the “wonderfully and eternally gracious gentleman” found there daily.

Doyle’s sacramental sense is highlighted by his apparent conviction that the miraculous is part of life and rather common in our world. Not that he was somehow unable to recognize the reality of problems or difficulties that might not seem miraculous at all. But yes, he found his universe wondrous.

It perhaps is unsurprising that his sense of the miraculous was strong. A doctor once told him and his wife Mary that they “would not have children.” However, Doyle wrote, “then came three children fast and furious!” The first was a girl, and twin boys followed.

In “Last Prayer,” a brief essay positioned so as to conclude “One Long River of Song,” Doyle asserted that no one more than he ever “gaped more in astonishment at the wealth of miracles everywhere every moment.”

Another essay appearing there, titled “Illuminos,” shares memories of his children at very young ages. Doyle sings out his realization, born of seeing “them clearly,” that they are “beings of great and humble illumination, dressed in the skins of new and dewy beings,” and “they are your teachers, and they are agents of an unimaginable love.”

They are, he continues, “miracles and prayers and songs of inexplicable beauty.”

Brian Doyle was a storyteller, a novelist, a unique essayist. With a huge excess of modesty, in my view, he described himself as “a small man who writes small essays about small matters.”

In these essays he usually was “mumbling about love, books, hawks, or children,” he said, and “sometimes all four at once.”