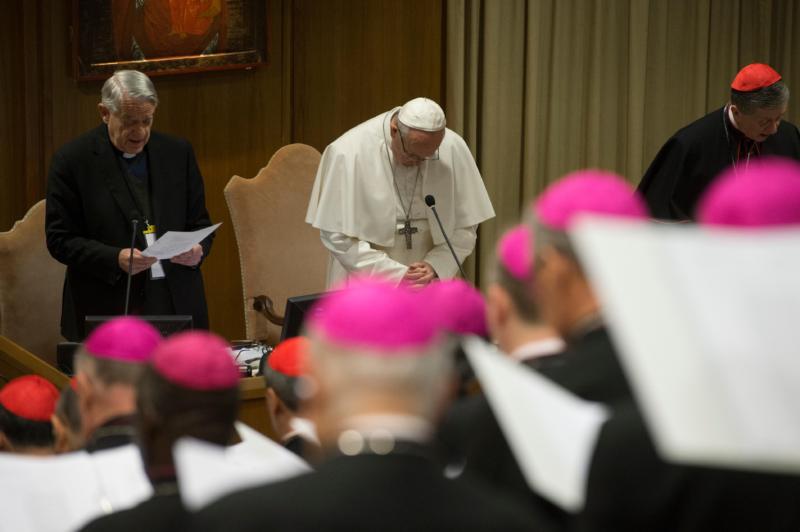 Pope Francis prays Feb. 22, 2019, the second day of the Vatican meeting on the protection of minors. (CNS photo by Vatican Media via Reuters)

VATICAN CITY (CNS) — Since Pope Francis convened a historic summit at the Vatican one year ago to address clergy sex abuse and accountability, much has been done, but advocates say more is needed.

Dozens of experts, abuse survivors and their advocates came to Rome the same week as the summit’s anniversary to emphatically reiterate the need to never let ignorance, complacency or denial ever take hold again and to make the church safe for everyone.

The advocacy groups held media events and worked on talking to as many Vatican officials and religious leaders as possible to highlight still unaddressed concerns such as abuse by women religious, transparency in past and current Vatican investigations of known abusers and the likelihood of ever seeing “zero tolerance” for known predators.

However, significant measures have been rolled out piecemeal over the year. Here is a rundown of the most major changes:

— Pope Francis approved a sweeping new law and set of safeguarding guidelines for Vatican City State and the Roman Curia in March, just a month after the Feb. 21-24 Vatican summit.

The new law “On the Protection of Minors and Vulnerable Persons,” beefed up existing criminal laws for Vatican City State and mandates quick reporting of suspected or known abuse to the Vatican tribunal. It covers all forms of physical and emotional abuse — not just sexual violence through coercion — as well as serious forms of mistreatment, neglect, abandonment and exploitation against minors, who are below the age of 18, and vulnerable adults. Any Vatican employee around the world can be tried by the Vatican court for violations.

This new law on child protection was meant to better comply with the U.N. Convention on the Rights of the Child and its optional protocol, since legal amendments made in 2013 brought Vatican law into detailed compliance with several international treaties the Vatican had signed over the past decades.

While Vatican City State is a tiny country with few residents, the move was also meant to be a role model for the rest of the church and those places or institutions still lacking concrete, clear guidelines and procedures.

— In May, Pope Francis issued “Vos estis lux mundi” (“You are the light of the world”) for the universal church.

The papal mandate revised and clarified norms and procedures for holding bishops and religious superiors accountable in protecting minors as well as in protecting members of religious orders and seminarians from abuse. It requires all priests and religious to report suspected abuse or cover-ups and encourages any layperson to report through a now-mandated reporting “system” or office that must be set up in each diocese by June of this year.

It insists leaders will be held accountable not only with suspected cases of committing abuse themselves, but also accusations of interfering with, covering up or failing to address abuse accusations of which they were aware.

No matter what local or national cultures or laws say, for the universal church, the document defined a minor as anyone under the age of 18 and included those who can be defined “a vulnerable person” and what is considered to be child pornography. It also established that bishops and religious superiors are accountable not just for protecting minors but also for protecting seminarians, novices and members of religious orders from violence and sexual abuse stemming from an abuse of power.

The document was a follow-up to Pope Francis’ 2016 document, “As a Loving Mother,” and together, the two documents are meant to correct what had been a lack of or unclear procedures for investigating the way a bishop, and now religious superiors, comply with already established norms against abuse and clearly expressing the consequences of noncompliance or cover-ups.

— The latest, most recent change was in December, when Pope Francis waived the obligation of secrecy for those who report having been sexually abused by a priest and for those who testify in a church trial or process having to do with clerical sexual abuse.

Abuse survivors had long called for lifting the obligation, saying it had been abused or used in ways to cover up misconduct and crimes.

Now, not only are victims and witnesses free to discuss their case, the amended law specifies that the still-in-effect obligation of Vatican officials to maintain confidentiality shall not prevent complying with civil laws, including mandatory reporting and following legal court orders.

— The same day he released the instruction in December, the pope issued a number of amendments to “Sacramentorum Sanctitatis Tutela” (“Safeguarding the Sanctity of the Sacraments”) from 2001.

Pope Francis changed the age defining a child from 14 to under 18 regarding what qualifies as “child pornography,” and the procedural norms for how the tribunal of the doctrinal congregation is to be composed and conducted was spelled out.

He removed the requirement that the legal representative of the accused be a priest, allowing the role of “advocate or procurator” to be any qualified “member of the faithful” who has a doctorate in canon law and is approved by the presiding judge.

The pope has other big decisions and changes still coming, Jesuit Father Hans Zollner, a member of the Pontifical Commission for the Protection of Minors, told Vatican News Feb. 20.

“This journey is not over. Soon there will be other steps, seen and prepared over this year,” he said.

The step-by-step process, he said, is meant to help the church develop “a culture of attention and prevention” that never ends.