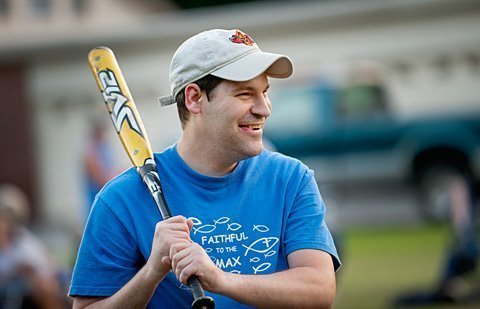 St. Maximilian Kolbe softball team member B.J. Voelkl smiles as he steps up to the plate during a July 17 game at the church in Ontario.

ONTARIO — Oppressive humidity, a heat index of 105 degrees and a forecast calling for thunderstorms didn’t keep 14 members of the St. Maximilian Kolbe softball team from showing up at the parish’s softball field July 17 in good spirits and ready to play against a team from Williamson Presbyterian Church.

Both teams belong to the Christian Ridge Softball League in Wayne County. The only Catholic team in the league of 10 Christian churches, the St. Maximilian Kolbe team played its first of nine games the first week of June, said Ken Pritchett, the team’s manager. Six of those games, including the July 17 game, were played on the softball field right on the grounds of St. Mary of the Lake Church, which in 2009 joined with Church of the Epiphany in Sodus and St. Rose of Lima in Sodus Point to form St. Maximilian Kolbe. The co-ed team is open to anyone in the parish who is at least 14 years old, he added.

"Our oldest player is close to 70 and the youngest is 16," Pritchett said. "We have such a wonderful variety of skills. Most people return year after year because they enjoy it. They look forward to it."

Parishioner Nelson Kiedrowski has been returning to the team each season since it first formed in 1984. The last of the team’s original members, Kiedrowski said he plans to continue playing for as long as he stays healthy. The team plays on Wednesdays, and the games always have been a great way to relieve mid-week stress, he said, noting that there’s another ulterior motive behind his longtime participation.

"It keeps my legs going for hockey season in the winter, so come September I’m not dead on the ice," explained Kiedrowski, 67. "I’m not a gym person and I’m not a runner either. I just keep playing."

Kiedrowski said he’s enjoyed his nearly 30 years on the team. There are more young people involved now than in previous years and the team is pretty good, he said.

Kiedrowski’s daughter, Susan Benedict, said she finds it amusing when young parishioners join the team and wonder aloud if her father will need another teammate to run around the bases for him after he hits the ball. They quickly learn that Kiedrowski is quite capable of rounding the bases himself, said Benedict, who has been on the parish’s softball team for more than 15 years. She’s been attending the team’s games since she was a small child and joined as soon as she met the minimum age requirement. She currently plays on two other teams in addition to St. Maximilian Kolbe’s, but the parish team holds a special place in her heart.

"I get to play softball with my dad," she explained simply.

Kiedrowski and Benedict are not the only St. Maximilian Kolbe players who make softball a family affair. Parishioners Jim and Cindy Showman both have played on the team since their youngest child was a baby. That child, Erich Showman, now is 28 and has been playing on the team for more than a decade. Like Benedict, Erich Showman grew up watching from the sidelines and joined the team as soon as he was old enough.

"I’ve known a lot of these people since I was a kid. It’s just really fun. Whether we win or we lose, we have a good time," Erich remarked.

His mother agreed, noting that the whole team feels like a family in its own right.

"We win some, we lose some. It’s not about that. It teaches the kids family values and about being a good sport and all those kinds of things," Cindy Showman said.

Although the players obviously enjoy winning, the team’s focus is strictly on fun and fellowship, Pritchett said. In fact, that’s the first guideline laid out in the league’s rule book, he added.

"It is extremely important to always remember the purpose of this league: To provide wholesome Christian fellowship and recreation for all of God’s children," the Christian Ridge Softball League’s rule book states. "Good Christian conduct and behavior is expected to be maintained at all times, keeping in mind the purpose and objective."

There’s definitely a different dynamic at work in the St. Maximilian Kolbe team, agreed Tyler Craft, who at 17 is one of the team’s youngest members.

"There’s not a lot of arguing. It’s more just for fun," said Tyler, who plays on the team with his sister while their mother is the team’s usual scorekeeper.

That’s not to say the St. Maximilian Kolbe players aren’t competitive, however. This was made clear before the July 17 game, when Pritchett mentioned that St. Maximilian Kolbe’s pastor, Father Symon Ntaiyia, had once suggested it might be an act of Christian charity for the parish team to let the other teams win.

"He takes care of the spiritual side. We’ll take care of the athletic side," Jim Showman remarked.