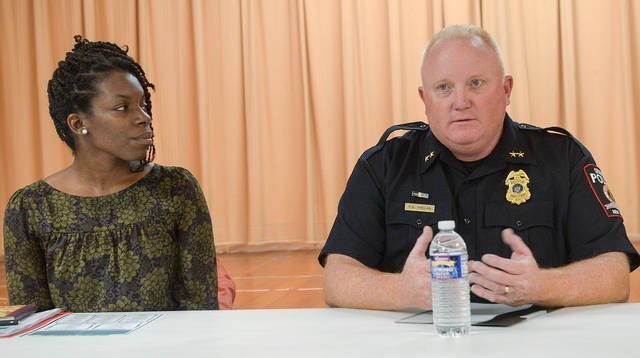 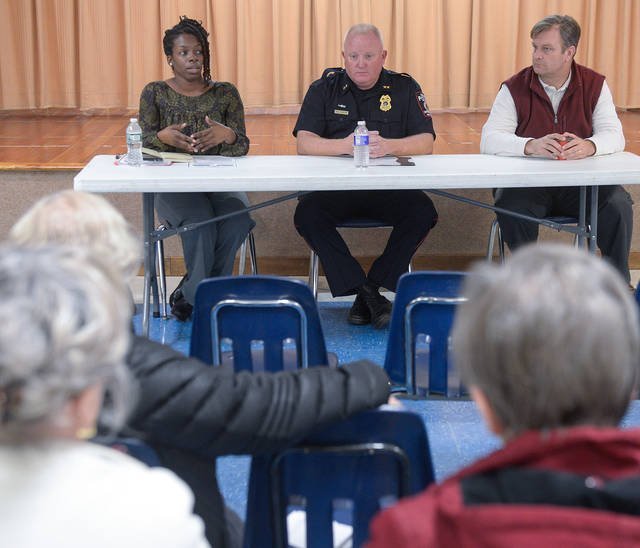 Greece Chief of Police Patrick Phelan talks about the opioid epidemic as Shawn James , an addiction therapist from Villa of Hope looks on during a open forum on the opioid crisis held at St. Charles Borromeo Church in Rochester on Oct. 22. (Courier Photo by John Haeger) 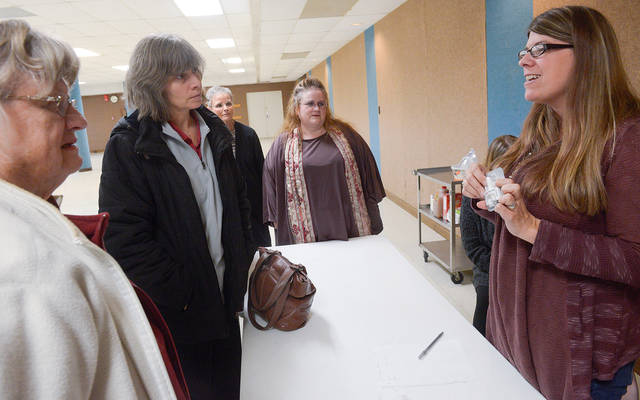 Greece Chief of Police Patrick Phelan talks about the opioid epidemic as Shawn James ,left, an addiction therapist from Villa of Hope and Andy Carey of MC Collaborative look on during a open forum on the opioid crisis held at St. Charles Borromeo Church in Rochester on Oct. 22. (Courier Photo by John Haeger) 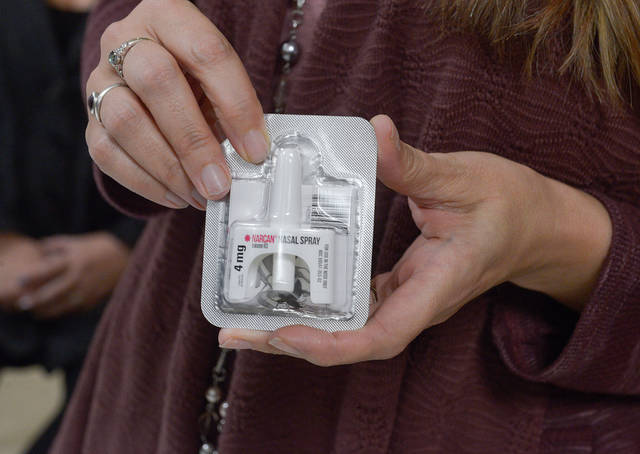 During a forum on the opioid crisis Oct. 22 at Greece’s St. Charles Borromeo Church, Stacey Gray, a registered nurse from Villa of Hope, explains how to administer Narcan to someone who has overdosed on opioids. 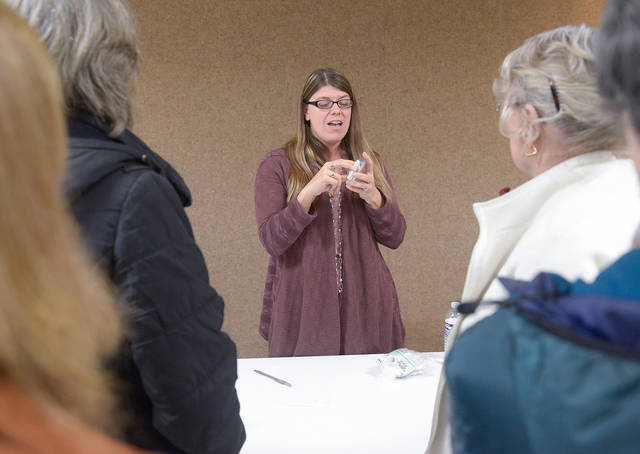 During a forum on the opioid crisis Oct. 22 at Greece’s St. Charles Borromeo Church, Stacey Gray, a registered nurse from Villa of Hope, explains how to administer Narcan to someone who has overdosed on opioids.

GREECE — As the Town of Greece’s chief of police, Patrick Phelan has dealt with his share of tragic circumstances.

Yet nothing, he said, compares to what’s being wrought by the ongoing opioid epidemic.

“In Monroe County we’re seeing 90 to 100 overdoses a month, and 15 to 20 of them are fatal. And that’s just the ones we know about,” Phelan said. “In my 29 years of law enforcement, I can’t remember anything killing people at that rate.”

Phelan made his remarks to approximately 40 people at an open-forum event on opioids Oct. 22 at St. Charles Borromeo Church, where he is a parishioner. Joining Phelan as panelists were Shawn James, an addictions therapist from Greece’s Villa of Hope, an agency that assists troubled youths; and Andy Carey, who, as cofounder of the MC Collaborative care-management agency, works with homeless and drug-addicted people in Rochester.

Carey said that in the city, he encounters growing levels of both urban and suburban residents who have become homeless through their addiction to opioids — drugs produced through either a partial or fully synthetic process.

Phelan noted that many present-day drug overdoses are fueled by fentanyl — a medication prescribed for treating severe pain that, according to the Centers for Disease Control and Prevention, is 50 times more powerful than heroin. Rather than be deterred by the prospect of injecting heroin mixed with illicitly manufactured fentanyl, Phelan said, drug abusers are actually drawn toward that life-threatening possibility.

“People are so addicted that they prefer the drug they know people overdosed on,” Phelan remarked.

How did we get to this point — a scourge that affects the 12-county Diocese of Rochester and our nation as a whole? Panelists at St. Charles Borromeo pointed to a rise in the use of, and addiction to, prescription painkillers, with adults of all ages being affected. Carey added that in recent years after stronger laws were passed against over-prescribing painkillers, heroin emerged as a popular alternative due to its comparative cheapness and availability .

James, meanwhile, noted that many people turn to drugs as an escape mechanism.

“I get a lot of people using opioids to mask depression, anxiety,” said James, who oversees Villa of Hope’s LIFEhouse, a residential substance-abuse treatment program for male youths. She also works with Rochester’s Open Access Clinic, which assists people with addiction.

The panelists cited several efforts being made to combat the opioid crisis, such as expanding treatment options and visiting schools to increase awareness. In addition, New York state’s Opioid Stewardship Act took effect July 1 to deter the amounts of painkillers prescribed; and nationally, President Donald Trump signed legislation Oct. 24 that aims, in part, to further limit over-prescription, prevent addiction from starting, improve access to addiction treatment and recovery, and slow the infiltration of illegal drugs into this country.

Along with such initiatives, Carey called for greater public compassion toward and understanding of folks grappling with addiction, calling it “a disease and not a moral failure.” He and James stressed the importance of lending patience and support to such people, saying they might well require several attempts in the hope of achieving sobriety.

In addition, participants on Oct. 22 agreed that the subject of addiction needs to be addressed openly, with Carey describing the open forum as “exactly how we do it” by uniting concerned citizens, relatives and friends. Meanwhile, James emphasized the importance of people in recovery building connections with churches, families and communities.

Joan Bigham, St. Charles Borromeo’s parish secretary, said she planned the event at her church with Father John Firpo, pastor, after reading an in-depth feature about the opioid epidemic in the Catholic Courier’s September 2018 issue. She also was influenced, she said, by a discussion that took place in August at East Rochester’s St. Jerome Church — one of many events held in the Diocese of Rochester during 2018 as a response to the Diocesan Public Policy Committee’s focus on the opioid crisis.