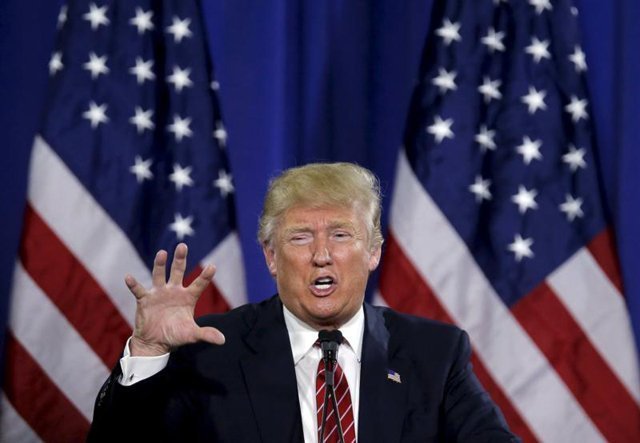 U.S. Republican presidential candidate Donald Trump speaks at a campaign rally in Cadillac, Mich., March 4.
By Catholic News Service
WASHINGTON (CNS) — Republican candidate Donald Trump’s run for the White House is putting the efforts by the Republican Party to defend and advance the many "noble causes" it has promoted in his history "in grave danger," said an open letter to Catholics published March 7 in the National Review.
"Donald Trump is manifestly unfit to be president of the United States. His campaign has already driven our politics down to new levels of vulgarity," said the letter from two prominent Catholics, Robert George and George Weigel.
"His appeals to racial and ethnic fears and prejudice are offensive to any genuinely Catholic sensibility," they wrote in their "appeal to our fellow Catholics and to all men and women of goodwill.
George is the McCormick professor of jurisprudence at Princeton University. Weigel is distinguished senior fellow at the Ethics and Public Policy Center and holds its William E. Simon chair in Catholic studies.
"There is nothing in his campaign or his previous record that gives us grounds for confidence that he genuinely shares our commitments to the right to life, to religious freedom and the rights of conscience, to rebuilding the marriage culture, or to subsidiarity and the principle of limited constitutional government," they said.
National Review, based in Washington, is the conservative magazine founded by William F. Buckley. The letter from George and Weigel included signatures from at least 35 others well-known in legal, academic, public policy circles as well as at think tanks.
George and Weigel said that the Republican Party — while "imperfect, like all human institutions, but serviceable" has in recent decades been a vehicle "for promoting causes at the center of Catholic social concern in the United States."
Those causes include "providing legal protection for unborn children, the physically disabled and cognitively handicapped, the frail elderly, and other victims of what St. John Paul II branded ‘the culture of death.’"
The party also has defended religious freedom "in the face of unprecedented assaults by officials at every level of government who have made themselves the enemies of conscience"; worked to rebuild "our marriage culture" based on the "sound understanding" that marriage is between one woman and one man; and made strong efforts to re-establish "constitutional and limited government, according to the core Catholic social-ethical principle of subsidiarity."
"There have been frustrations along the way, to be sure; no political party perfectly embodies Catholic social doctrine," they said. "But there have also been successes, and at the beginning of the current presidential electoral cycle, it seemed possible that further progress in defending and advancing these noble causes was possible through the instrument of the Republican Party."
George and Weigel acknowledged that Trump "speaks to issues of legitimate and genuine concern" and said they understand that as a result, many people, including Catholics, have been attracted to his campaign.
Some of those issues, they said, are "wage stagnation, grossly incompetent governance, profligate governmental spending, the breakdown of immigration law, inept foreign policy, stifling ‘political correctness’ — for starters."
"There are indeed many reasons to be concerned about the future of our country, and to be angry at political leaders and other elites," George and Weigel said.
But they urged Catholics and other voters to consider other Republican candidates who are "far more likely" than Trump "to address these concerns, and who do not exhibit his vulgarity, oafishness, shocking ignorance, and — we do not hesitate to use the word — demagoguery."
George and Weigel did not name the others still in the running for the Republican nomination: U.S. Sens. Ted Cruz, of Texas, and Marco Rubio, of Florida, and Ohio Gov. John Kasich.
Trump’s record and his campaign "show us no promise of greatness; they promise only the further degradation of our politics and our culture," George and Weigel said.
"We urge our fellow Catholics and all our fellow citizens to reject his candidacy for the Republican presidential nomination by supporting a genuinely reformist candidate," they added.
George and Weigel also pointed to Trump’s talk on the stump of ordering U.S. military personnel "to torture terrorist suspects and to kill terrorists’ families." The writers pointed out such actions are condemned by the Catholic Church.
Such policies, they added, "would bring shame upon our country."
On the campaign trail, Trump had said that as commander in chief, he "would order the military" to carry out torture and override the fact the U.S. military is not duty-bound to carry out unlawful orders. But after facing scathing criticism of his views on how to fight terrorism, CNN reported March 4 that Trump had reversed himself and said he would not order the military to violate international law.
Copyright © 2023 Catholic News Service, Inc. All rights reserved. Linking is encouraged, but republishing or redistributing, including by framing or similar means, without the publisher's prior written permission is prohibited.