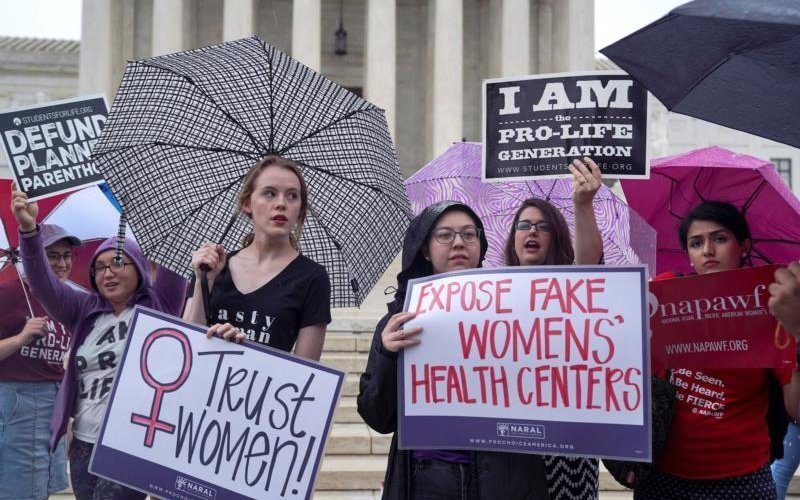 A woman who supports abortion stands alongside pro-life supporters during a June 22, 2018, rally outside the U.S. Supreme Court in Washington. (CNS photo by Toya Sarno Jordan/Reuters)

WASHINGTON (CNS) — While a survey of more than 54,000 Americans showed little change in their attitudes between 2014 and 2018 on the legality of abortion, researchers detected movement in many demographic groups, Catholics included.

Catholics “mirror the rest of the country pretty closely, particularly white Catholics,” she added. Fifty-three percent of white Catholics believe most or all abortions should be legal compared to 40% who say most or all should be illegal, Jackson noted, “so they’re right in line” with the majority of Americans.

However, “when you look at Hispanic Catholics, you’re looking at a different picture,” she told CNS. “We pull out the Hispanic and Latino population, because they’re a distinct group. They’re divided heavily by religion and by place of birth. A healthy minority of Hispanics are evangelical, and the PRRI study looked at the attitudes of Hispanics born in the United States, Puerto Rico and Latin America separately.

“The Hispanic Catholics are a good bit different from white and other nonwhite Catholics that look like the rest of the population as whole,” Jackson said.

Other nonwhite Catholics support abortion’s legality by a 55% to 37% margin, approximating the views of their white co-religionists. But a majority of Hispanics, 52%, believe abortion should be illegal in most or all instances, while 41% hold the opposite view.

Among other nonwhite Catholics, 13% say they’ve grown more supportive of abortion, as opposed to 9% who say they’re now less supportive.

The survey, according to Jackson, did not ask the time frame in which they had changed their views, or the circumstances behind the change. The interview subjects from 2014 are not the same from 2018.

Survey respondents were also asked whether they would vote only for candidates who share their views on abortion. Among those for whom it made a difference, the percentages favored Catholic demographic groups who believe more or all abortions should be illegal.

The Catholic Church teaches abortion is morally wrong, upholding the sanctity of life from conception to natural death.

“Solid majorities of all major religious groups in the U.S. support government-backed health insurance programs covering contraceptives,” the survey results said. “Those numbers decline among all religious groups on support for covering abortion, with the considerable variance between only 22% support from white evangelical Protestants and 80% support among Unitarian Universalists.”

Support for legal abortion was particularly strong in the northeastern United States — New York, New Jersey, Maryland, Delaware and the six New England states — each registering at least 61% support for legal abortion in most or all cases. White Catholics, meanwhile, have their strongest representation in the Northeast, with 20% of its white residents professing to be Catholic, according to PRRI.

“Although a few states such as Alabama and Missouri have recently passed laws that — should they survive court challenges — would make abortion illegal with virtually no exceptions,” the survey said, “there is no state in which more than one-quarter of residents say abortion should be illegal in all cases.”

The survey was conducted by phone between Jan. 3 and Dec. 30, 2018, among 54,357 respondents, 60% of them contacted via cellphone. At least 1,000 interviews were conducted each week. Interviewers asked to speak to the youngest adult living in the household. The margin of error for the total survey is 0.4 percentage points.

Editor’s Note: The full PRRI survey on abortion attitudes can be found at https://bit.ly/31tLOUa.