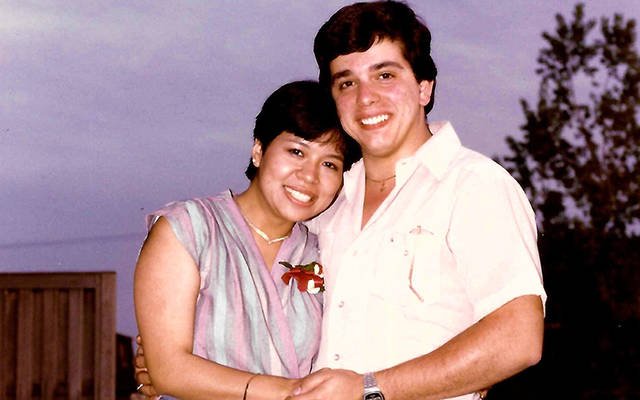 Ed: After we were engaged, our friends decided to throw us a couples’ shower. Leonor was so excited. I enjoyed listening as she told me how fun it would be and what she was planning to wear. At the party, we played the Not-So-Newlywed Game against two married couples. The men and women separated to write their answers on cards.

Leonor: I wrote confidently. I knew Ed’s favorite restaurant, favorite band and item if stranded on an island. Then came a question about a Muppet. I was about to choose an adorable one, but instead I stopped and asked myself, “Which Muppet would Ed choose?”

Ed: I wrote my answers quickly. The last question was, “If your wife or wife-to-be was a Muppet, which one would she be?” I wrote down the perfectly logical answer.

Leonor: The game continued. The other couples were arguing. It came down to the last question for the win. What Muppet? Ed held his card up and it said, “Miss Piggy.”.The wives shouted, “That’s so mean.” “How dare you call her a spoiled, selfish, fat pig.” I was surprised to hear them complain. Then I said, “Miss Piggy is the perfectly logical answer.” Then in unison, Ed and I both said, “Because she’s the only female Muppet!” This was true at the time.

Ed: In our marriage, I tend to be the logical one and Leonor is often more emotional; opposites attract. I try to give Leonor time to express herself while I listen. She tries to remember that since I’m usually logical, I sometimes give short answers to be concise. Even after all these years, we often forget, but when we remember, we don’t think we’re opposites. Instead, we feel united and strong, like when we won the Not-So-Newlywed Game.