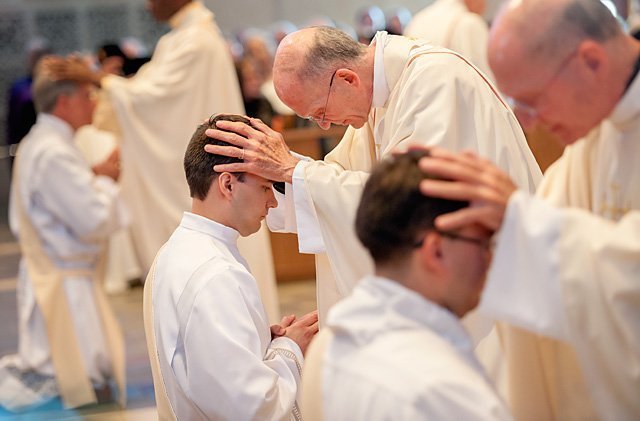 Father Richard Beligotti (center) and Father Robert Beligotti (right) were among dozens of diocesan priests who laid their hands on the heads of newly ordained priests Michael Fowler (from left), Carlos Sanchez and Matthew Jones during a June 20 Mass at Rochester's Sacred Heart Cathedral.

ROCHESTER — Father’s Day Weekend got off to a special start June 20, with three men assuming the title of Father — in a priestly sense — at Sacred Heart Cathedral.

Now that many years of preparation are behind them, Fathers Michael Fowler, Matthew Jones and Carlos Sanchez all agreed that their new designation sounds and feels pretty nice.

"Amazing," Father Jones said. "I never had any way to predict how this would feel."

"I feel the joy of Jesus Christ in my life," Father Sanchez added.

The trio were ordained by Bishop Salvatore R. Matano before a nearly full cathedral. Noting that Father’s Day was the next day, the bishop likened priestly fathers to biological fathers, saying that "the good father is always present to his family" while telling the newly ordained priests that "the church is your spouse and indeed, as in a marriage, the two become one."

Father Fowler, a native of Blessed Trinity/St. Patrick parishes in Tioga County, actually is a father as well as grandfather, having once been married. Now that he has officially entered the priesthood, Father Fowler said he’s in awe at realizing that "my family has grown to hundreds, even thousands, of people spiritually."

He, Father Jones and Father Sanchez earned two rounds of applause during the two-and-a-half-hour ordination Mass. The first came after the presentation of candidates to begin the Rite of Ordination; the second occurred toward the liturgy’s conclusion, when Bishop Matano gestured toward the congregation and told the new priests, "There is your family. Serve then well."

Father Sanchez, a native of Medellin, Colombia, said a personal peak moment occurred when he was lying prostrate during the Litany of the Saints.

"You could really feel the presence of God," he said.

Father Jones, meanwhile, said he was extremely touched when Bishop Matano asked for a moment of silence toward the end of Mass, then got down on both knees to receive, rather than give, a blessing from his newly ordained priests. Father Jones, who hails from St. Mary Southside Parish in Elmira, described the bishop’s humble gesture as "unbelievable." 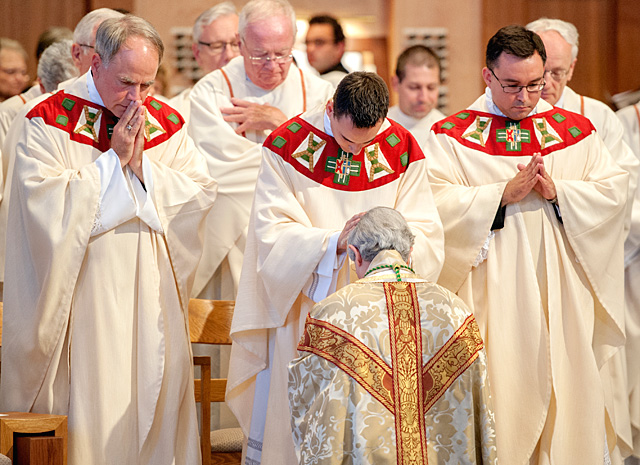 At the end of the ordination Mass Bishop Salvatore R. Matano knelt and was blessed by each of the new priests. Above, Father Carlos Snchez blesses Bishop Matano as Father Michael Fowler (left) and Father Matthew Jones pray.

Other highlights of the liturgy included several portions sung in Latin by the diocesan choir, made up of musicians from various parishes; the presence of several dozen priests and deacons; and attendance by numerous family members and friends of the new priests — including the father and sister of Father Sanchez, who journeyed all the way from Colombia.

Perhaps the day’s only somber aspect involved the absence of Deacon Daniel Ruiz, who also was scheduled to be ordained June 20 but was called home to Colombia because his mother is gravely ill. Deacon Ruiz will be ordained by Bishop Matano after he is able to return to the Diocese of Rochester, on a date yet to be determined.

"We pray for his safe return here and we joyfully anticipate his ordination to the priesthood," Bishop Matano said at the beginning of Mass.

Bishop Matano told the three men during his homily that "henceforth you will be called Father — not as a title of entitlement, but a title of sacrifice and service."

"To be sure, my brothers, the challenges ahead are real and serious," Bishop Matano added, pointing out that in this day and age people who proclaim the teachings of Christ are often met with rejection, indifference, criticism and attempts at suppression. But the bishop encouraged his new charges to continue speaking the truth and to "grow stronger each day in your union with Jesus Christ" while possessing "a burning desire to love Jesus as he loved us."

Despite the potential trials that the priestly life can involve, Bishop Matano concluded the homily by affirming his great joy at being a priest.

"After living this life for almost 44 years, there is no other vocation that I ever would have chosen," he said to Fathers Fowler, Jones and Sanchez. "The priesthood is my life. I pray that it will always be your life."