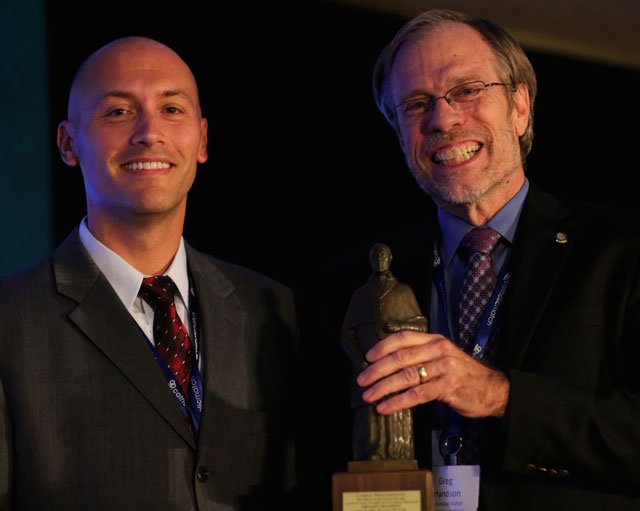 Rob DeFrancesco, president of the Catholic Press Association, poses with Greg Erlandson, Our Sunday Visitor president and publisher, after the CPA presented Erlandson with the St. Francis de Sales Award June 26 during the Catholic Media Conference in Buf falo, N.Y. The award recognizing excellence in journalism is the highest honor given by the association.

"Everyone gives lip service to adult faith formation but everyone here in the room, we’re the ones actually doing it," he said at a June 26 luncheon at the Catholic Media Conference where he was presented with the highest award the Catholic Press Association of the United States and Canada presents to an individual for "outstanding contributions to Catholic journalism."

The June 24-26 conference in Buffalo, attended by about 300 people this year, is sponsored by the CPA and the Catholic Academy of Communication Arts Professionals.

Erlandson had high praise for the attendees, noting that in his time talking with many of them during the conference, he realized they wear many hats in their multiple roles of editors, communication directors, webmasters and chief blog writers.

"I’m honored and grateful to be with you and numbered in your tribe," he told the group.

He said the mission of Our Sunday Visitor, based in Huntington, Indiana, is to "form and inform Catholics and help them see the world through the eyes of faith," which involves journalistic and catechetical components. Catholic media professionals are all called to that, he said, even when this is challenged by budget cuts and other pressures.

Erlandson’s other roles in the Catholic press have included his job as editor of National Catholic Register, correspondent for the Rome bureau of Catholic News Service and editor of OSV Newsweekly. He also has been a consultant for the Pontifical Council for Social Communications and was appointed last year to a committee working to reform the Vatican’s communications arm.

Mercy Sister Mary Ann Walsh, who died April 28 in Albany, was also presented with the CPA’s St. Francis de Sales Award at the Sisters of Mercy motherhouse in Albany March 12.

Sister Walsh, who was the U.S. church correspondent for America magazine, stepped down last summer as director of media relations for the U.S. Conference of Catholic Bishops.

"Her life of service to the Catholic press, the USCCB and the church is outstanding and a model for all," said Rob DeFrancesco, president of the CPA and associate publisher of The Catholic Sun in the Diocese of Phoenix, in explaining the decision to bestow the award.

At a June 24 dinner at the Buffalo conference, the late Cardinal Francis E. George of Chicago was named this year’s winner of the CPA’s Bishop John England Award. The cardinal, who died April 17, was publisher of the Catholic New World, newspaper of the Archdiocese of Chicago.

The England award is named for the Irish-born bishop of Charleston, South Carolina, who founded The Catholic Miscellany in 1822. As publisher of the newspaper, Bishop England defended separation of church and state, saying it was good for both entities. He also espoused freedom of religion. Presented annually, the award recognizes publishers in the Catholic press for the defense of First Amendment rights, such as freedom of the press and freedom of religion. It is the CPA’s highest award for publishers.

The award was accepted by Joyce Duriga, editor of the New World, who shared anecdotes of the cardinal whom she described as funny, attentive, humble and hardworking and who loved the Catholic press.