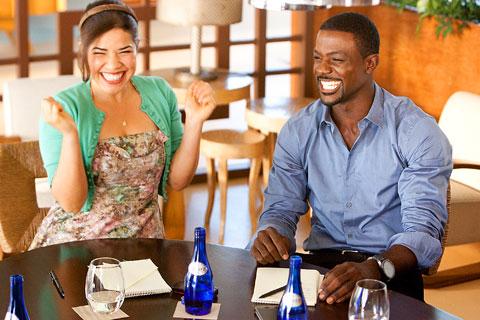 NEW YORK (CNS) — Who knew that so much racial harmony could be brought about simply by dancing the electric slide? That’s about as deep a message as you’ll find in the scattershot comedy "Our Family Wedding" (Fox Searchlight).

It’s the time-honored story of how the course of young love never runs smoothly when families are bickering. This update of "Father of the Bride" is given an ethnic twist by making bride Lucia Ramirez (America Ferrera), a Latina from a warm, hard-working Mexican-American family, and groom Marcus Boyd (Lance Gross), an African-American with a prosperous single father.

The spouses-to-be are idealistic. She’s dropped out of law school to tutor immigrants — her family’s more disappointed with that than with her choice of a husband — and, just out of medical school, he’s about to go to Laos to join Doctors Without Borders.

Explicit bigotry is absent, and racial banter is kept to a pleasant minimum in favor of physical comedy, although that includes a crude sequence about a goat that gets into someone’s supply of Viagra.

Otherwise, it’s a cheerful outing that strains to be inoffensive. The women get into the typical preparations and visit a bridal shop, and the fathers (Forest Whitaker as Gerald Boyd, Carlos Mencia as Miguel Ramirez) get into physical scrapes and shout a lot.

The faith differences — Marcus is a fallen-away Baptist, Lucia a Catholic — are mentioned, but those, like all the other genuinely serious issues and potentially serious ones, are left unexplored. And, in the end, they are married by a priest.

Despite the few elements listed below, this nuptial comedy is probably acceptable fare for mature teens.

The film contains a fleeting instance of crass language and the implication of a premarital relationship. The USCCB Office for Film & Broadcasting classification is A-III — adults. The Motion Picture Association of America rating is PG-13 — parents strongly cautioned. Some material may be inappropriate for children under 13.

Jensen is a guest reviewer for the Office for Film & Broadcasting of the U.S. Conference of Catholic Bishops. More reviews are available online at www.usccb.org/movies.