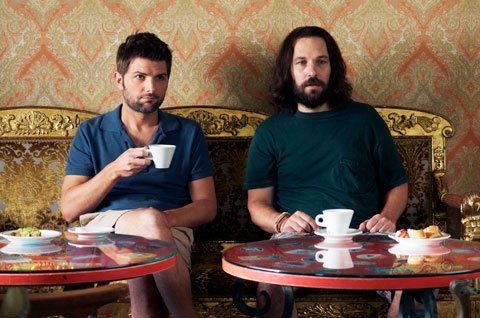 NEW YORK (CNS) — As it follows its gentle, ridiculously naive central character’s efforts to navigate his way through the cynical jungle of modern society, "Our Idiot Brother" (Weinstein) recalls such memorable screen tales as "Being There" from 1980 and 1994’s "Forrest Gump." Yet, while occasionally effective — though hardly equal in impact to those earlier titles — this satire is also sexually errant.

Opening scenes see our hero, a hippie produce farmer named Ned (Paul Rudd), demonstrating his profound cluelessness by blithely selling a stash of marijuana to a uniformed police officer. Emerging from prison some years later, Ned find that his selfish live-in girlfriend Janet (Kathryn Hahn) has taken up with a new beau called Billy (T.J. Miller), leaving no room — or role — on the farm for Ned.

Director Jesse Peretz’s underplayed comedy scores a few hits on modern mores as it contrasts Ned’s straightforwardness with the compromises and moral corner-cutting that underlie his sisters’ ostensibly more successful lives. But its use of nudity and sexual situations to elicit laughs, as well as its mainstreaming of Natalie’s lesbianism, make it inappropriate for all.