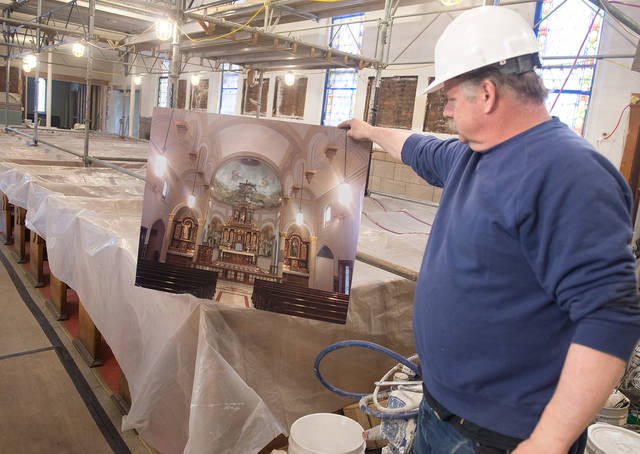 Project manager Frank Marianacci holds up an artist’s rendering April 11 of some of the renovation work being done at Our Lady of Victory Church in Rochester. It is the first major renovation to be undertaken at the church since a fire there in 1912. (Courier photo by John Haeger) 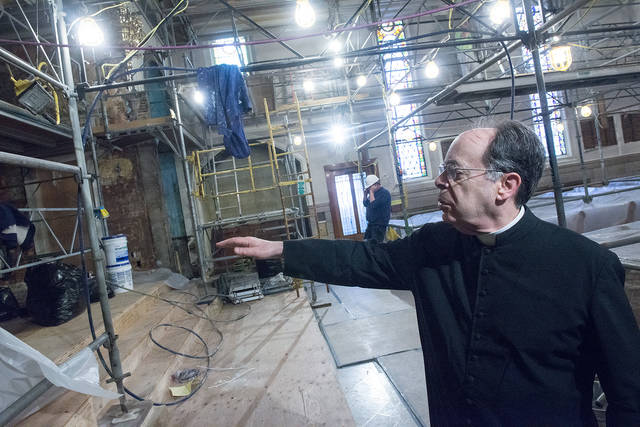 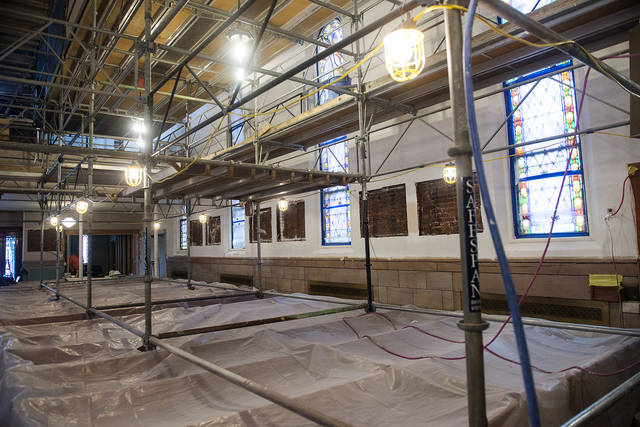 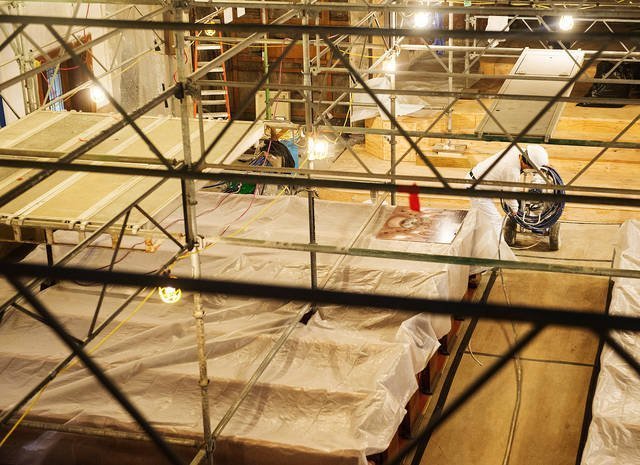 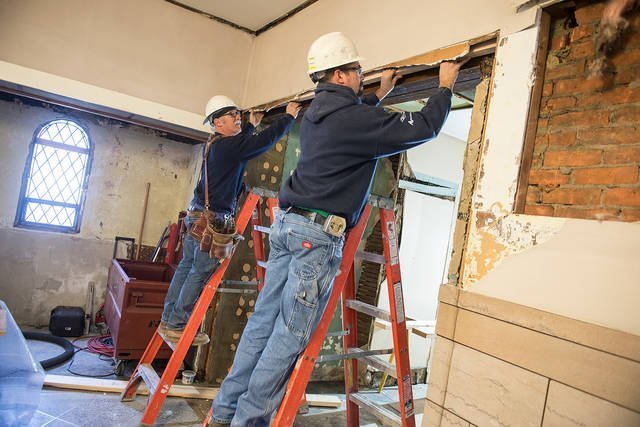 ROCHESTER — Restoration of the sanctuary and interior of Our Lady of Victory Church has begun in preparation for its 150th anniversary this fall.

It is the first major project for the church since a fire destroyed its interior in 1912, said its pastor, Father Ronald Antinarelli, during an April 11 site visit.

“The big fire here in 1912 gutted the place inside,” he said. “It’s a miracle the building didn’t collapse.”

Nearly a century later, huge rows of scaffolding fill the church and rise up to the top of its 37-foot interior as workers repair or replace sections of the walls and ceilings. Even the pipe organ has been removed to protect it from dust and also to restore it, Father Antinarelli said.

Over the years, all the woodwork had been painted white, he explained, and he had long felt it was time to restore the church and make it beautiful again. The $1.7 million project, which was approved last fall, is being paid for by private donors, he added.

The parish expects all of the work, which began in February, to be completed ahead of the parish’s anniversary Mass Oct. 7, which is the feast day of Our Lady of Victory.

“It’s pretty incredible,” said Frank Marianacci, whose company is overseeing the repair and renovation work in the nave. “Everything gets touched — new walls, paint schemes and a new apse.”

The apse is the domed, semicircle-shaped area of the sanctuary where the altar is placed and clergy are seated, according to newadvent.org. The sanctuary itself is being extended two feet and will feature a new marble floor and altar top, Father Antinarelli said, and a new, gold-leafed altar rail also will be installed.

The old confessionals at the rear of the church have already been removed to reveal the area that originally housed the baptistry and will do so again, Father Antinarelli said. That work alone revealed stained-glass windows that had been blocked for 100 years, he noted. A wrought iron gate with an image of the Holy Spirit will be placed in front of the baptistry, and a mural of St. John the Baptist baptizing Christ will be painted on its walls.

The project will create as little disruption as possible in parish life, said Father Antinarelli. Daily Mass is celebrated in the parish hall. And every Friday, the construction team removes the plastic covering on the pews as sacristan Paul Kennedy and his wife and a team of volunteers prepare the church for Sunday Masses. A temporary altar is moved in and out weekly.

The parishioners’ volunteer work is part of the parish’s generous spirit, which has been there from the inception, said Father Antinarelli. Its first pastor donated the statue of Our Lady of Victory, which was sculpted in France and later blessed by Bishop Bernard J. McQuaid, he said.

Bishop Salvatore R. Matano will bless and place a new crown on the restored statue as part of the consecration of the rebuilding, added Father Antinarelli. The statue had been singed in the 1912 fire and will be placed in the reredos, which means “behind the behind” and is the area connected to the altar that stands behind it, he noted.

Father Antinarelli has hired Arte Granda, a liturgical design company based in Madrid, Spain, for the design and restoration work in the sanctuary. While the Arte Granda team works back in Spain on the painted fabric panels that will cover the apse walls, Steve Grove from Bristol will rebuild the wooden finials that hung from the ceiling and also will add gold leaf to them, Father Antinarelli said.

Kennedy said Arte Granda’s work also will include restoration of the Divine Mercy statue and sculpting new statues of St. Joseph, St. Anthony and angels to be placed at Our Lady of Victory’s sides. Upon the team’s return to the church later in the summer, its members will paint the sanctuary ceiling and install a stained-glass window at the top with an image of the Holy Spirit, he added.

Kennedy said parishioners anxiously await for the work to be done. He has been impressed by the level of research the Arte Granda team has conducted to restore the church to its original beauty. The team even determined that the altar was made of black walnut and mahogany that had been painted over, he said.

An artist’s rendering of the final design “doesn’t do it justice from what it can be,” Kennedy said. “There’s a lot of excitement.”