Out of the eye of I - Catholic Courier 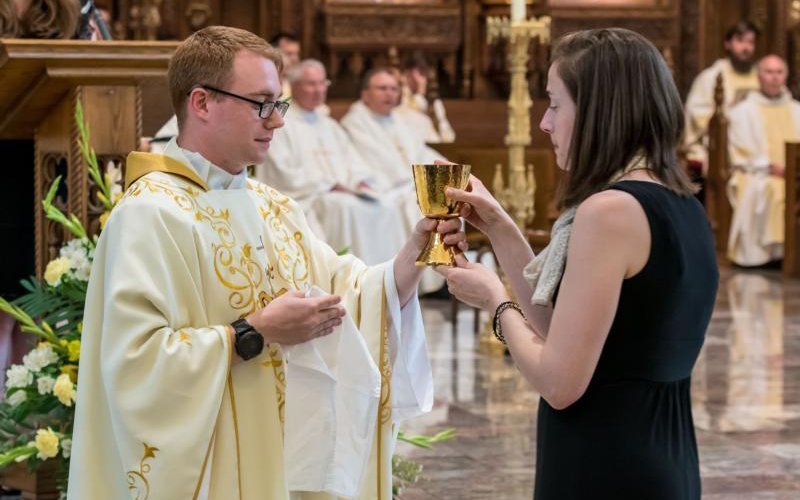 Go in peace, glorifying the Lord by your life

This is the final installment of a seven-part series on the Mass.

It was like being in the eye of a hurricane of grace. That was how I best remember my first Mass as a priest.

Things were rather peaceful for me in the sanctuary and at the altar, but lots of things were going on out there — in the congregation. My family and friends were present, smiling and beaming with pride. And there I was — a priest at last, standing “in persona Christi” at the altar.

At first I was fairly unaware of what was going on outside the sanctuary. I was just trying to make sure that my arms were raised at the right time and that the page turns of the missal happened in the right sequence. Most of my initial Masses as a newly ordained priest were like this.

Over time, however, things began to change. The more I came to know the people I shepherded as a priest, the more they began to change me. And over the years, I have been drawn further away from the calm and security of the eye at the center and into the blessings and storms of the grace-filled lives of those I have served.

One of the challenges facing a newly ordained priest is that things in ministry are not always like what we had learned in seminary. I think this is common to every field and profession — the oft-repeated phrase, “They didn’t teach me about this in school,” comes to mind.

Certainly much of what I was taught in seminary was enormously helpful, but the biggest lesson I learned about being a priest came after seminary and through ministering to God’s people: Ministry is an art, not a science.

Things are not always as they seem, and it is important to meet people where they are — to travel to the winds outside the calm of the sanctuary, rectory or chancery. And nowhere is this more apparent than at holy Mass.

I have experienced this most powerfully in how my preaching has been changed. When a priest first arrives in a parish he, of course, does not know the people. And his preaching naturally reflects this fact.

But soon enough, as he walks with his people, he starts to know them better. He hears their confessions, counsels them, baptizes their children and buries their dead.

And quickly, his homilies begin to change. And so it has been for me. At first, they were just people and we were at Mass together. But very soon, as I looked out on the congregation, I saw the people who I loved and served, and I began to be drawn to them.

At Mass I would look to the right side of the congregation and see a woman filled with sorrow for an abortion from years ago. Looking to the left I would see a seemingly solid marriage teetering on divorce. In front of me in the first pew would be an elderly businessman with a terminal cancer diagnosis, and in the back of church a husband and father struggling with a pornography addiction.

Knowing the people he shepherds changes the way a priest preaches. While endeavoring to boldly preach the truth of Jesus Christ and the Catholic faith, his preaching is necessarily shaped for and by the people he serves. This is the art of being a priest.

Over the past years of priestly ministry, I have been richly blessed by many things. But perhaps the sweetest grace is that Jesus and his people have gently yet relentlessly drawn me away from the calm and ease of the hurricane of grace’s eye — which quite honestly is my selfish “I” — and into the winds of grace in people’s lives at Mass. I have been forever changed by this. And I am eternally grateful.

(Father Girotti, who serves as vicar for canonical services and associate moderator of the curia for the Diocese of Green Bay, Wisconsin, is author of “A Shepherd Tends His Flock.”)