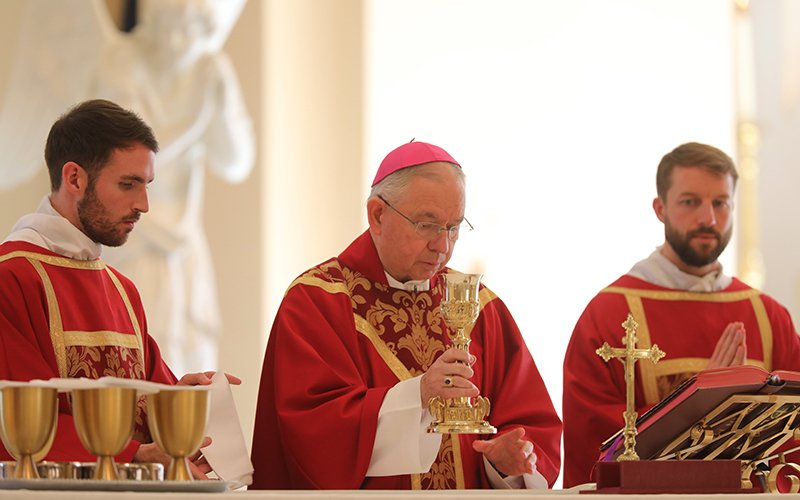 BALTIMORE (CNS) — In a Mass Nov. 14 to mark the opening of the 2022 fall general assembly of the U.S. Conference of Catholic Bishops, Archbishop José H. Gomez of Los Angeles called on his brother bishops to take time for self-examination and to renew their vocation and ministry.

Archbishop Gomez, who will end his three-year term as USCCB president at the close of the meeting Nov. 17, was joined by seven cardinals and more than 220 archbishops and bishops in celebrating the Mass at the Basilica of the National Shrine of the Assumption of the Blessed Virgin Mary in Baltimore.

At the beginning of the Mass, Baltimore Archbishop William E. Lori welcomed the bishops to the basilica, the first cathedral built after the establishment of the United States.

Readings are a call to examine and renew one’s vocation

In his homily, Archbishop Gomez noted that the church is nearing the end of the liturgical year and he reflected on the readings for the day’s liturgy, from Revelation and the Gospel of Luke. “Today, the readings of the Mass are useful to examine ourselves and renew our vocation and ministry,” Archbishop Gomez said.

In the first reading, he noted, the Lord says, “I know your works, your labor. … Moreover you have endurance and have suffered for my name, and you have not grown weary.”

The archbishop said that because God knows us so well — “better than we can ever know ourselves — God understands that sometimes we can lose our enthusiasm and our sense of purpose; we start doing things more out of a sense of duty than out of a sense of love.”

In Revelation, the Lord says, “You have lost the love you had at first.”

However, God gives a simple way to be renewed and refreshed in love, he continued.

“He says to us, ‘Realize how far you have fallen. Repent and do the works that you did at first.’ He is calling us today to come back to him, to place ourselves in his presence, to seek his light and guidance, to remember and renew our love for him,” the archbishop said.

The story in Luke’s Gospel of the blind man seeking healing from Jesus along the road to Jericho is a beautiful example of that renewal, he said.

“The saints remind us that this blind man is also us — you and me. This is a miracle story, but on a deeper, more spiritual level, this is the story of our lives as disciples.”

Following Jesus on the path of life

Archbishop Gomez said we are all following Jesus on the path of life, trying to walk in his footsteps. “Sometimes, in our ministries and in our lives, we have a hard time discerning the Lord’s will; it’s hard to know what he wants us to do.

Prayer such as that of the blind man opens our eyes to realize that the Lord is near, the archbishop said. “And, as we know, that means Jesus is alive. He’s with us, now, as truly present as he was on that road to Jericho.”

The archbishop said Jesus asked the blind man what he wanted him to do. “Brothers and sisters, Jesus puts the same question to us. He is inviting us to look inside ourselves, to recognize our blindness, to recognize that we can’t go on without his light.”

The blind man’s prayer, “Lord, let me see,” should also be our prayer — “especially in our darkness, in those times when we’re tired, when our hearts feel restless and troubled, when our burdens feel like they’re too much.”

Invoking the patron namesake of the basilica, Archbishop Gomez asked Mary, Our Lady of the Assumption, to win for us the grace of being able to see and be faithful to God’s will.

“May her Son give us the eyes to see that we can continue our mission of following him and serving him, and giving glory to God with our lives.”

The Mass also was attended by priests and religious and members of the USCCB staff, who were in Baltimore for the meeting, which began Nov. 14 with a morning of prayer and an executive session.

Public portions of the meeting Nov. 15-16 are scheduled to include the election of a new president and vice president for the conference, who will succeed Archbishop Gomez and Detroit Archbishop Allen H. Vigneron, current USCCB vice president, who is ineligible to be elected president because next October he will turn 75, the age at which canon law requires bishops to submit their resignation to the pope.

Gunty is associate publisher and editor of Catholic Review Media, the news arm of the Archdiocese of Baltimore.