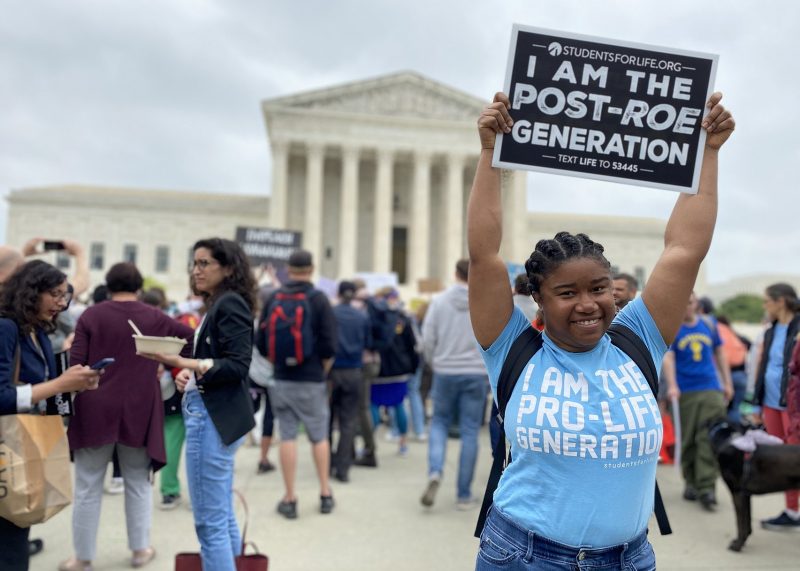 Norvilia Etienne, of Students for Life, holds a sign outside the Supreme Court of the United States May 3, 2022, the day after a draft of the court's opinion was leaked signaling that the court was leaning toward overturning Roe v. Wade. (CNS photo by Rhina Guidos)

WASHINGTON (CNS) — The man with the train conductor’s cap gently wove through the crowd gathered outside the Supreme Court of the United States in the early afternoon May 3 while carrying a sign that read: “Stop hating each other because you disagree.”

Hours earlier, just after midnight, punches had been thrown in the crowd that had gathered outside the highest court of the land. News sites published reports of angry demonstrators shouting at one another.

Some arrived shortly after the online news site Politico published a report late May 2 from a leaked draft opinion signaling that the majority of Supreme Court justices seem set to overturn Roe v. Wade, the landmark 1973 legal decision that legalized abortion in the country.

But the daytime crowd gathered just after lunchtime May 3 seemed more intent on talking and listening. Peppered among them were Catholics Jamie Manson and Norvilia Etienne, members of organizations with different points of view on abortion.

“This is amazing,” Etienne, a 26-year-old Catholic from Fredericksburg, Virginia, told Catholic News Service, saying she was in favor of what was being reported in the draft opinion leaked.

“It gives the decision back to the states so regular people like myself can make the decision to vote (for) people that I want in my state and pass pro-life laws,” said Etienne, fellowship and impact coordinator with Students for Life.

Nearby, Manson, representing Catholics for Choice, was telling a crowd: “We need the faith voice more than ever because we are fighting religious ideology that is being codified into law.”

She spoke about the Catholics who hold similar beliefs, including the president of the United States.

“We heard the arguments on Dec. 1, and this looks to be the way they were moving,” Manson told CNS, saying she wasn’t surprised by the revelations of where the court was heading.

What the two Catholic women could agree on was the leak.

“I don’t like … the way it was released,” said Etienne. “We have a system in this country and that system should be followed.”

“I was so shocked by the leak, not surprised by the articulation of the decision,” added Manson.

The women weren’t alone in the surprising revelations that threw the country into a tailspin late May 2, which now have cast political implications on the upcoming midterm elections.

The court confirmed the authenticity of the content in the leaked documents and Chief Justice John Roberts called it a “betrayal of the confidences of the court.”

“This was a singular and egregious breach of that trust that is an affront to the court and the community of public servants who work here,” he said in a statement.

Though the breach unleashed tensions that already ran high, for those like Etienne and Manson, the mission continued to convince others of their stance.

To those who do not share the same point of view, “I would say that we love you,” said Etienne.

“We want to provide the support and help that you need to carry your baby to term so that you can keep having, you know, keep going to school, keep having the resources you need to have a good career but also have your baby,” she said. “It’s not a curse to be pregnant.”

But above all, Manson said: “What I really want is for us to be in dialogue with each other. I really do. If there is there any type of way to engage, but there’s no space in the Catholic Church right now to have this conversation … to start thinking about the mother, to think about the complexity of her life, trust her to be a moral agent.”

And yet for Etienne, it’s a conversation about her very existence.

“My dad actually told me that I was almost aborted,” she said. “I’m here today in front of you because my mom ultimately chose life for me.”

Tags: Abortion, U.S. Supreme Court
Copyright © 2023 Catholic News Service, Inc. All rights reserved. Linking is encouraged, but republishing or redistributing, including by framing or similar means, without the publisher's prior written permission is prohibited.