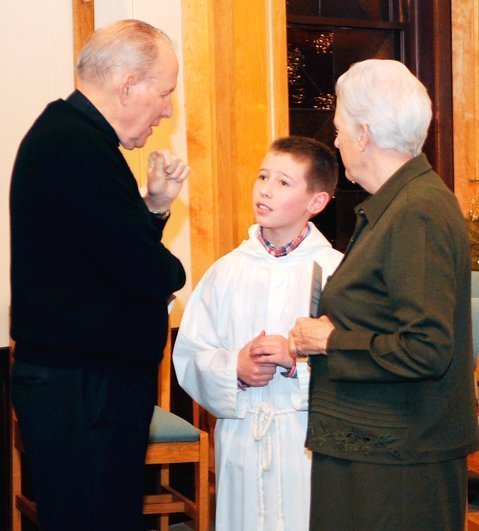 OWASCO — In 1911 the Catholic families in the small Cayuga County town of Owasco grew tired of traveling 13 miles to the neighboring town of Moravia by bobsled and wagon each time they wanted to attend Mass. They banded together to purchase a parcel of land in Owasco for $2,000, and Timothy and Ellen O’Brien secured the mortgage for the new congregation, which held its first Mass in January 1912.

Many of the O’Briens’ descendants were in attendance one century later, when Bishop Matthew H. Clark presided over a Jan. 8 Mass marking the 100th anniversary of St. Ann Parish. More than 130 people filled the small church’s pews for Mass that evening before venturing downstairs into the church hall for an anniversary dinner, complete with cake and a video slideshow depicting scenes from St. Ann’s history.

"One hundred years of grace as been lavished on the people of Owasco," Bishop Clark said during his homily. "Happy anniversary everyone. What a wonderful occasion to express our thanksgiving for all of those years. Somehow every one of us connects somehow, some place, in the unfolding of those 100 years, and it’s that place of connection to which I would call your attention today."

Bishop Clark recalled the personal connections he shared with several of St. Ann’s pastoral leaders. During his tenure as bishop he’s appointed several people to leadership positions at the parish, reluctantly accepted the retirement request of another and presided over the funeral of still another. Bishop Clark also reminisced about the connections he’s made with St. Ann parishioners, including descendants of Timothy and Ellen O’Brien. When he entered the church that evening, Alice O’Brien Foster approached him and reminded him of the time he’d confirmed her grandson, Peter Kelly, he said.

"Thirty years ago I confirmed Peter Kelly at his home when he was very seriously ill, and he didn’t live many years after the confirmation. I met his grandmother tonight, who reminded me of all the people who were there. When we come together for an anniversary like this we’re not remembering dead memories. We’re remembering God’s interventions in our lives through the years, the way God has nourished our souls," he said.

Many in attendance raised their hands when the bishop asked how many had been baptized, married, or made their first Communion or confirmation at St. Ann.

"So many beautiful memories of life, memories of life at times that are very important to us, memories of life’s beginnings and profound transformations," Bishop Clark said. "I invite every one of you, whether you grew up here, moved here in adulthood or joined for the night from other parishes, to join your own story to the larger story here tonight. It would be fascinating to know all the connections."

"You have wonderful young people in this parish," he said, praising the young musicians and cantors at the liturgy.

Dale Rescott’s daughters, Celina and Marissa, were included in the bishop’s praise. Celina sang during the Mass while Marissa played the flute, and their mother drank in the beauty of their music as well as the beauty of the church, which was still bedecked with Christmas evergreens and poinsettias.

"I like the quaintness of a small church," Rescott remarked.

Cheryl Foster, another of the O’Briens’ descendants, echoed those sentiments.

"It’s a very small church, a very close church. Everyone knows each other and is very supportive of each other," Foster said.

Harriet and Richard Barone feel so connected to St. Ann and its parishioners that they drove five hours to be at the anniversary celebration. The couple belonged to the parish for 19 years before moving to Connecticut in 2003, but they still come back to Owasco and St. Ann as often as they can, they said.

"It’s a family. It’s so small almost everyone knows each other. That’s the fun part," Harriet Barone said.

St. Ann parishioners clearly take pride in their church, Bishop Clark said as he commented on the church’s beauty and its pristine condition.

"I realize there might have been a little extra dusting and sweeping and that’s fair enough, but what a lovely church you have here. This church is a gem," he said.