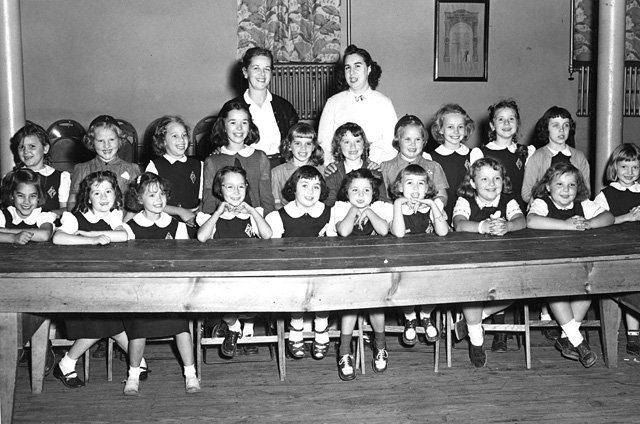 Female students at St. Patrick School pose for a class photo in 1953. In 1950 the school had expanded into the former Stanbrough Mansion, facing Front Street.

OWEGO — As she went to check on students playing at outdoor recess, Paula Smith paused to admire some of their artwork on a hallway wall.

Meanwhile, Deacon Mike Donovan grew emotional while noting how much he has enjoyed teaching fifth- and sixth-grade religion at St. Patrick.

"The love of my life is this school," said Deacon Donovan, a pastoral associate for Blessed Trinity/St. Patrick parishes, whose two children are graduates of St. Patrick School.

And Smith spoke in wonderment of several current students who wanted so badly for their struggling school to stay open, they offered to donate their own birthday funds.

"They didn’t want gifts, but money that they could give to their school," she remarked.

Smith acknowledged that wistful moments such as these have come up often lately as she, staff and students spend their final weeks together. Their somberness was set in motion by Bishop Salvatore R. Matano’s announcement this past March that the Tioga County school — which had been troubled for several years by declining enrollment and escalating expenses — will close at the end of the current school year.

Yet on a late-April afternoon, Smith masked her sadness when coming into contact with the St. Patrick children, exchanging conversation, hugs and high-fives as if it were just another normal day.

"We’re trying to make it the best situation it can be," she said.

Along those lines, a commemorative evening is planned for Friday, June 5, beginning with a prayer service in St. Patrick Church from 6 to 6:30 p.m. and immediately followed by a gathering at the school until 8 p.m. for families, alumni, community members and other supporters. Food, refreshments, entertainment, an art show, viewing of photos and a tour of the school facilities will all be included.

Although she expects some tears to flow at the event, Smith emphasized that "it’s a celebration," designed to acknowledge the immense good generated by the school over a period of 150-plus years.

One of the oldest schools in the Rochester Diocese, St. Patrick opened in 1859 as a four-room wooden structure 17 years after St. Patrick Parish was founded. The Sisters of Mercy arrived in 1869 and taught there for the next 130 years.

In 1950, the school moved into the former Stanbrough Mansion, located directly behind St. Patrick Church, creating some unique architectural characteristics for a Catholic school. A new six-classroom addition opened in 1967.

A special display room at St. Patrick — originally designed for the school’s 150th-anniversary celebration in 2009 — features a wide array of memorabilia reflecting the school’s history. Mixed in among class portraits and photographs of past priests and teachers are historical pictures, such as one of Sen. Robert F. Kennedy’s visit to the school in 1966 and another of Bishop Fulton J. Sheen’s appearance the following year to dedicate the school addition.

Smith’s place in history will be as St. Patrick’s last principal, a position she has held since 2008 (she also teaches the sixth grade). She said the past few months have been marked by staff seeking new employment, and students looking to transfer to local public schools as well as Catholic schools further away. St. Patrick is the last Catholic school in Tioga County.

As the final year of their beloved school draws to a close, several students spoke of the intangibles they will retain from their St. Patrick experience.

Kathryn Donnelly, a third-grader, said her favorite part has been "learning about Jesus more. That’s pretty much what you do all day here, and it’s pretty fun."

John Paul Kidney, as well, has embraced having a faith-based education. Through attending St. Patrick, the fifth-grader said, he’s come to appreciate that "the most important relationship in life is to have a good relationship with God and get into heaven."

Mia first attended St. Patrick School as a second-grader. Her experience with the school and the Catholic faith was so positive that she ended up being welcomed into the Catholic Church this past April 4, during the Easter Vigil Mass at St. Margaret Mary Church in Apalachin.

Mia noted that the St. Patrick faculty has played a vital role in furthering her faith.

"All the teachers are great here," she said.

And Eli Martin, a fourth-grader, will remember his instructors not so much as teachers, but as extended family members.