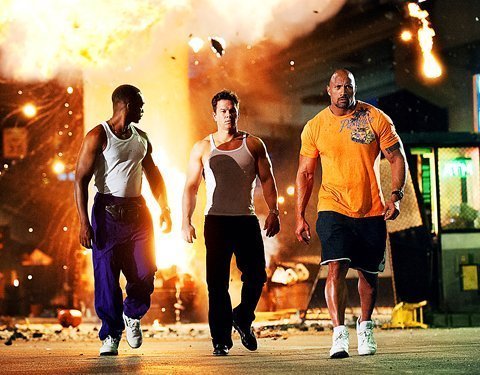 NEW YORK (CNS) — The fact-based crime chronicle “Pain and Gain” (Paramount) presents itself as a merry riff on the theme of a gang too comically inept to shoot straight. Yet the vicious antics of its central characters — acted out within a lowlife milieu of strippers and porn pushers — are too repellant to be amusing. Snarky swipes at religion throughout Christopher Markus and Stephen McFeely’s screenplay, moreover, culminate in blasphemous humor and the character of a pervert priest.
¬†
Set in Florida in the early 1990s, director Michael Bay’s would-be caper follows a trio of dimwitted bodybuilders: personal trainers Daniel Lugo (Mark Wahlberg) and Paul Doyle (Dwayne Johnson) and ex-con gym rat Adrian Doorbal (Anthony Mackie). Dissatisfaction with his working-class lot prompts Daniel to come up with an extortion scheme — and to recruit his two pals as accomplices.
¬†
Their target is one of Daniel’s clients, abrasive but successful businessman Victor Kershaw (Tony Shalhoub). Kidnapping Victor, the boys plan to beat and torture him into signing over all his holdings to them. Once he does so, they’ll kill him.
¬†
Despite the array of slapstick errors they commit while executing it, their harebrained plot almost succeeds. But then, thanks in large part to the intervention of straight-arrow police officer-turned-private-eye Ed Du Bois (Ed Harris), things begin to unravel.
¬†
In adapting a series of magazine articles by Pete Collins, Bay invites viewers to marvel at the he-men’s jaw-dropping stupidity. But the nasty proceedings that pit these dopes against the thoroughly unlikable Victor — and, subsequently, against a predictably low-minded porno king — involve too much cruelty and bloodletting to register as comic.
¬†
Via Adrian’s behind-bars conversion to a simplistic, utterly hypocritical brand of Catholicism, faith comes in for a satiric bashing. So it’s hardly a surprise when we see the seedy clergyman to whom Adrian turns for help on his release from the big house start to put the moves on his newfound protege.
¬†
Happily married Ed provides the picture’s slim moral core. But, surrounded by gleeful greed, mindless mayhem and dumbbell debauchery, the center, in the words of poet W.B. Yeats, cannot hold.
¬†
The film contains a negative portrayal of Christian faith and clergy, brutal, sometimes gory violence, strong sexual content — including graphic sex acts, masturbation and upper female and rear nudity — drug use, about a half-dozen instances of profanity and pervasive rough and crude language. The Catholic News Service classification is O — morally offensive. The Motion Picture Association of America rating is R — restricted. Under 17 requires accompanying parent or adult guardian.
¬†
– – –
¬†
Mulderig is on the staff of Catholic News Service.